Although I think many readers could have predicted the end of this issue, it has some interesting moments tying it in with the upcoming “Third Army.” For the most part, though, this is the epilogue readers would have expected after reading about Jon Stewart killing a fellow Green Lantern. 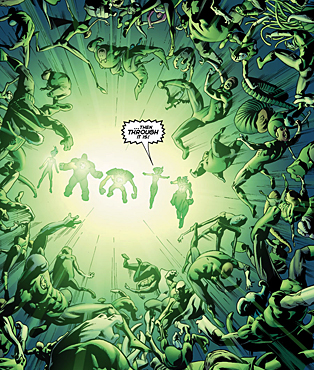 The majority of the story is about John Stewart being arrested and then tried for the murder of Lantern Kirrt, a decision he made trying to protect Oa from being attacked by a group of willpower-depleting aliens. The standout parts of this issue are those involving Guy Gardner. Over the course of this arc, Guy has been the most interesting character. He barges into the Guardians’ citadel and yells at them about their decision-making. He’s also not afraid to take on his fellow Lanterns to protect John Stewart. While Guy was always second banana to Hal Jordan, he’s really become a strong, well-written hero under Tomasi. Guy’s actions may force the hand of the Guardians who, for the first time in Green Lantern Corps, speak of the “Third Army.” They also speak of the threat Guy poses, and how he needs to be “marginalized,” a statement which hints at Guy’s possible end.

The art in this issue is a better display of Fernando Pasarin’s abilities. A few issues back, I bemoaned his lack of diversity. Now, since the story takes place on Oa, Pasarin gets to draw as many alien Lanterns as he wants. Yet while the aliens are all individual, humanoid characters still have similar facial features. At one point, Guy is arguing with a Lantern named Vath Sarn who wants to destroy the image of the Kirrt, but Sarn looks exactly like John Stewart. If not for the name, I would have been utterly confused and thinking, “Why is John suddenly fighting with Guy?”

While the ending was predictable, Tomasi is not. As a writer – in both Green Lantern Corps and Batman and Robin – he has shown that he is not afraid to take risks with his characters, nor is he afraid to dish out violent justice. In Tomasi’s hands, John Stewart is not safe, and I look forward to seeing how – or if – he survives. 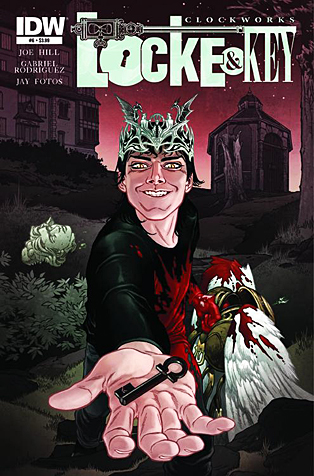 For a comic that has been running for 30 issues, Locke & Key has been a consistently excellent read. Joe Hill’s foreshadow-heavy storytelling and Gabriel Rodriguez’s meticulous imagery have made Locke & Key a dependable mix of strong characters, great stories and fantastic art. Closing out the “Clockworks” arc, Hill and Rodriguez give readers another strong issue that paves the way for the final arc, “Omega,” due out in the fall of 2012.

For the conclusion of “Clocks,” Joe Hill packs a lot of action and violence into this issue. Now that he’s established such a magical world, he’s free to play in it, and this issue in particular relies heavily on the familiar mysticism. Hill’s story is fluidly constructed, and transitions between scenes are well executed. The finale in the cave is immediately offset by an establishing shot that contrasts completely with the previous tonality of the story, and it helps guide readers through. The final pages are heavily emotional, and due to a lack of dialogue, those emotions are palpably conveyed to readers.

Gabriel Rodriguez is once again crucial to the story. Some pages require him to methodically tell the action or story in the same setting (the cave scenes, for example). The action is spread across two pages, yet much like a stationary shot in a movie, a lot is happening on the periphery. And this kind of storytelling, which readers of Locke &Key recognize, is an additional highlight to the issue. The comic may be word heavy, but at no point is it tedious. Rodriguez’s illustrations, as well as Jay Fotos’ colors, make the comic a beautiful read.

IDW has put a countdown above their logo on every issue of Locke & Key. Now, only seven issues are left until the series ends. This is sad to see. Joe Hill has created and penned continuously fantastic issues and has led readers into a terrifying and magical world. To see how things have built up, and how Hill has ended the arcs in this story, leads me to trust that the final seven issues will be spectacular. As much as I’ll hate to see this story end, I can’t wait for it to happen. 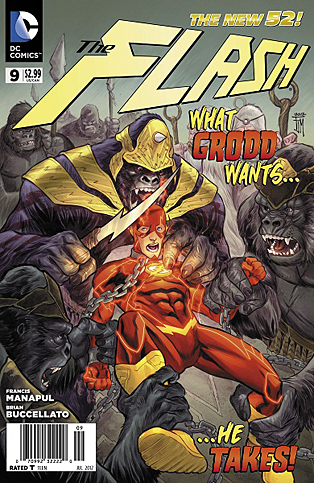 Bannen’s Book of the Week: I liked this book from the first page due to its panel construction. I’m a fan of Francis Manapul’s art, and the way in which he chooses to illustrate the story makes The Flash a great visual read. While the issue has a few hanging threads, Brian Buccellato and Manapul reintroduce Gorilla Grodd, as well as expand The Flash mythos and rogues’ gallery in a finely-penned story.

Manapul and Buccellato spend a lot of time developing Grodd’s home world. As a fan of DC, I’ve always been aware of Gorilla Grodd (and promptly scared of him), but I have a very sparse understanding of his history. The writers seem to be aware of this, because much of the issue is taken up with explaining Grodd’s history. While the opening of the story immediately sets up Grodd as the villain, Manapul and Buccellato use the other gorillas in Grodd’s village, particularly the elders, to give readers the basic understanding they need to enjoy the rest of the comic (which is action-heavy). By the time the story concludes, readers will have a good sense of who Grodd is and what he stands for. Several unanswered questions involving Iris West and the Pied Piper remain, but given the cryptic final page, I think we’ll get those answers in the near future.

Francis Manapul’s art is fantastic in this issue. The first two pages alone are a brilliant mixture of narration and storytelling through fluid visualization. Depicting action, especially in a Flash comic, cannot be easy. Yet Manapal finds a way to smoothly illustrate Barry’s movement, be it throwing punches or evading his captors. And even with Manapal’s thin, angular lines, Grodd looks terrifying. He’s an imposing figure from the first page.

Additionally, Manapal’s style – which has the faded colorization found in a watercolor painting – is vibrant and engaging. He has a great mixture of pencils and inks that hone his style so that it is instantly recognizable. One page in particular shows Barry getting his memories back, and while there are no panels, each image blends seamlessly with the next so that I had no trouble tracking across the page. This is also due to Wes Abbott’s lettering. Whenever an artist has a unique take on panel construction, it seems like the letterer has the task of giving order to the page. Abbot does this throughout the book and given the detail, he succeeds in creating a smooth flow.

I’ve never really considered myself a Flash fan, but I have always been a fan of Gorilla Grodd. To me, the idea of a super-intelligent silverback gorilla is terrifying. Manapul and Buccellato succeed in making Grodd a scary villain, and while I wish he appeared in more than one issue, the writers left the story in a way that shows Grodd will return. And when he does, no amount of bananas or fecal shields will save the day.