There’s a scene in the role-playing documentary The Dungeon Masters where one of the subjects, Scott, is sorting and arranging his hundreds of dice. As Scott’s doing this, he’s talking about how the dice need to be touched so that they’ll gain some of your personal vibrations and roll well; then he starts to talk about the die that roll poorly. Those die are separated from the rest, dipped in water and put in the freezer. Once the offending die is frozen, all of the other dice are lined up and the frozen die is placed in the middle so the other die can “see” it. Scott then smashes the frozen die with a hammer as a lesson to the rest of his dice. “This is what happens when you roll poorly!” he shouts at the rows of unshattered dice. 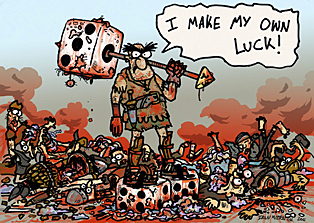 Games and people and superstition go hand in hand in hand, and while I’ve never gone as far as freezing a die and shattering it, I have deemed certain dice unlucky and swapped to a new set mid-game. Baseball players will notoriously attempt to recreate the exact same circumstances that preceded their last good hit or throw, right down to wearing the same socks – unwashed. Gamblers hold that using certain denominations of currency is bad luck, and that even wearing certain colors will affect your game negatively. Games of chance and fun become games of luck when people start to take them seriously, and role-playing games are no different. I thought it would be interesting to find out all of the different ways gamers express their superstitious natures when it comes to their dice, so I crowd-sourced my question on the Internet. Here’s a sampling of what I found.

• By far, the most common superstition comes with letting other people touch your dice during play. Do not let anyone else touch your dice during play, ESPECIALLY not the Game Master! Why? It messes up the vibrations in the dice, confuses them and then they don’t know who they’re serving.
• If your dice are rolling poorly all night, and you give them to the GM, they’ll start rolling really well. They are fickle servitors.
• Always place your dice together when you’re not using them. Organize them and put them to the side. Place them in a row or a line. You could also stack them straight up on top of one another or in a pyramid.
• Alternately, never place your die together when not using them. A bad roll can be contagious. Separate them to prevent this from happening.
• Regardless of how you’re putting them off to the side, they all must be set to either their lowest value or their highest. For example, a twenty-sided die is to be placed either with the 1 or the 20 side up. Most people said that they stack them with the higher value facing up, so that the dice understand that this is their preferable state and they must try to achieve this with each toss. Some, though, place them with their lowest value facing up in an attempt at expending the low rolls. I’m torn on the matter.
• Dice are to be praised for rolling well and punished for rolling poorly. The example I opened this article with is one extreme method of punishing your die. Some just freeze them and then take them out later for further use; others burn them. Some players have a special holding box or bag that bad dice are exiled to. This is most often called the box/bag of shame.
• Always have a few full sets of dice on hand. You should only ever roll with a full set of dice.
• Test your sets of dice at the start of the game to see how they’re going to roll. Or don’t, because you might be wasting good rolls on a test. Don’t test more than once! There are only a certain amount of good rolls in each die; you don’t want to waste them.
• Always roll on the wood of the table, on your character sheet or on some other predesignated rolling area! Anything outside of that doesn’t count. Unless it’s a 20, 20s always count.

It can’t all be boogeymen and vibrations though; some science behind good and bad die rolls must exist, right? If you talk to Louis Zocchi, GameScience dice manufacturer, he’ll tell you that the way most dice are created leave them with rounded edges and a slightly oblong shape. Most dice will only reliably give you access to a certain amount of sides. Being slightly ovoid in shape, they’ll tend toward their longer sides each time you roll. Sometimes, the sides that the dice prefer are in the higher range, sometimes in the lower range – and this is where the myth of lucky and unlucky dice comes from. It’s a good thing for you that GameScience sells truly randomized dice that will give you access to all of its sides equally. 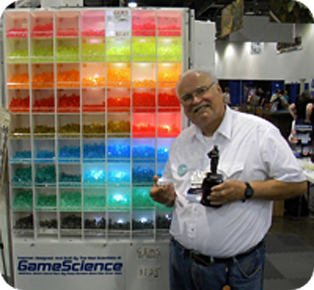 The science doesn’t end there, though! To find out just how reliable your die is, check out this article on Gnome Stew.

I’m not even going to pretend to understand what’s going on over there. There’s more wizardry on that page than in any of my current D&D campaigns. I couldn’t even begin to decode the algebraic alchemy happening there, but it looks like this is a mathematical method that will allow you to truly decode how lucky and unlucky your dice are.

In role-playing games, dice have become the physical embodiment of luck. They are miniature gods that we all try to appease, deluding ourselves that we are the ones in control, that anything we do will somehow affect their outcome in a way that’s favorable to us. They’re working on a whole other plateau of reality, so we desperately seek to figure out how to gain their favor and we will try anything, from physical violence against them to prayer, to try to assert control over them. We must always remember, however, that dice are as much our allies as they are our adversaries, and the true enemy is the Game Master, who is actively trying to kill us. In the end, dice are just as integral a part of the game as are our own thoughts, feelings and imagination. So as long as you’re enjoying yourself, feel free to believe in as many crazy superstitions as you’d like. Just don’t forget to have fun with it!

Sound off in the comments if I haven’t listed your favorite superstition!