Here’s something: I lived in a frat house for three months.

It wasn’t as bad as you might guess. Actually, it was nice. I only got two parking tickets that summer. I also read several issues of Men’s Health, cover-to-cover, on the toilet. It was a type of tourism. (“I’m in here!” I’d shout from my toilet’s stall, absolutely panicked anytime I heard the bathroom door open. In a frat house you can never predict when and how someone will be naked.)

When I wasn’t sitting on the toilet, I was probably in Kurt’s room. Kurt was a healthy, handsome young man: high-strung but easy-going, intelligent and polite. He had a ready laugh and lots of friends. He was popular with the ladies, too. Sometimes he wore sleeveless shirts, and his arms were golden-brown and muscular. 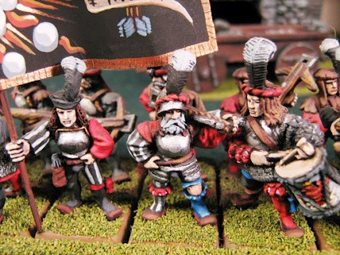 But behind those twinkly eyes and all those muscles lurked a terrible, terrible secret.

Kurt was into tabletop Warhammer.

I was horrified. Thanks to this discovery, I now considered Kurt with grim fascination, exactly as I regard serial killers and Satanists. I spent weeks watching Kurt labor, meticulously, over an entire battalion of miniature figurines. Each was the size of a M.U.S.C.L.E. or a Monster in my Pocket.

Every last one of the tiny figures would be painted by summer’s end, Kurt insisted, but I wasn’t so sure. Still, Kurt dedicated himself to each individual statuette. The paints were itsy-bitsy, too, all these little canisters arrayed on a table in the center of the room. Every paintbrush was, somehow, the most delicate paintbrush I had ever seen. The figurines themselves were stunning in their detail.

“I think it’s great you’re so into this,” I murmured to Kurt, trying to not shake the table. I was impressed in spite of myself. Moreover, I never let on that this was the most audaciously dorky thing I’d yet witnessed.

I do appreciate Warhammer‘s appeal, though. Warhammer is just… so… cute.

The first and best strategy game I ever played was MissionForce: CyberStorm. The game is turn-based – that is to say, it’s low-stress, like Chess or Go – and “time” becomes this staccato of ruminative decision-making. The board is arranged into hexagon-shaped spaces and you can move yea-many spaces in any direction during any given turn. (By the way, this is the nearest I have ever come to understanding a tabletop strategy game.)

Perhaps CyberStorm is meant to describe a dystopian future in which the evil corporation Unitech is bent on the Universe’s death and destruction. I simply found the game endearing. I loved it – tens and twenties of mecha, all warring onscreen! – because the little laser-zaps and explosions and plumes of smoke were just so darling. The sounds were also very satisfying, marvelous metallic grates and squeals and crunches coming out of these “massive,” tiny robots. 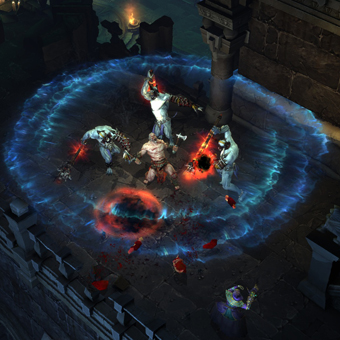 Diablo III is adorable in the same way. I loved the first Diablo, and I love this Diablo, because everything is so Lilliputian, so intricate and charming.

The first Fallout game has very much the same effect on me. The box copy advertises that your “victims” might “explode like a blood sausage into chunks of flesh” but I, a squeamish person, am never overwhelmed by the game’s violence. Rather, it’s enchanting and twee! Perhaps the sounds are visceral and immediate, perhaps gore is over the top, but all I’m really doing, aren’t I, is clicking on an anthill.

I recently described Diablo III as a toy theater, as a paper proscenium designed for my Jaelym alone. Jaelym: Tiny Champion, Slinging Death and Destruction Everywhere! (It isn’t a very good epitaph, no.)

An acquaintance of mine, somebody named Andy Pressman, wrote that he “approved” of my reading of Diablo III as “literal space,” where the set pieces and figures are already actual-size and to scale. At first I was pleased that Andy knew exactly what I meant, but then I was jarred: doesn’t everybody interpret Diablo III as a small diorama, located just inside the computer’s screen? Isn’t this a normal attitude?

So I was relieved when another friend on Twitter (someday we’ll exchange names, but for now I’ll have to keep calling him “Sega Juice”) wrote that he felt this way about nearly every Blizzard game: “TINY OVERSERIOUS MINIATURES *YOU* CAN MANIPULATE FOR SERATONIN,” he said.

I emphatically agreed with him, adding that the game’s unending gravitas makes it all the more adorable and dear.

In playing Diablo III, I feel such an expansive detachment from its happenings and goings-on. Take, for instance, my unprejudiced penchant for destruction: “We aren’t bad people,” I assured my friend Julian, right as his Witch Doctor punched a desk into smithereens. “We are only cats who like to tip things over.”

I am so uninvolved with the plot that I become irritated with any pretense of storyline or dialogue. “Shut up shut up shut up,” I suggested to my MacBook. Then I looked at Julian. “Ugh! Why won’t they get the story out of the way? Man, in the ludology versus narratology argument,” and I pounded my fist against my dining table, “ludology wins.”

Sega Juice (sorry) remarks that Diablo III treats its plot in an oddly nice way — it is “crucial to the characters but [just] window dressing for the player.” My play experience matches his: as the 2-inch-tall characters chat among themselves, I usually smirk. It’s so cute, the way you believe everything is so important! I think at them imperiously.

We aren’t bad people. We are only cats who like to tip things over.

Even the largest, most intimidating baddies are simply pygmy figures on a small stage: Isn’t that dear, how this guy supposes he’s going to destroy my tiny Jaelym, I idly wonder. Then an adversary will murder my tiny Jaelym and I am very slightly irked.

If there actually is a Christian God, I imagine this is how He might feel when He peers in at us.

The concept of pure Christian love is a funny one. Charles Grandison Finney, an evangelist working in the 1700s, advocated the idea of God as a “disinterested spectator.” Finney’s version of God borrows from the Aristotelian notion of a God who is content only to gaze into His own navel, wholly disengaged from humankind’s insipidness. Finney adapted Aristotle’s idea, preaching instead a “benevolent complacency.” Perfect love, Finney argued, is objective, unselfish, unbiased. He believed in a loving God who is also impersonal – like a high school guidance counselor, sort of.

I’m no theologian, but that is how I feel about tiny Jaelym, the littlest punch-happy monk. My divine cursor charts her diminutive course, and when she encounters real trouble – not server lag, not a network timeout or the million other things plaguing Diablo III – I swoon with delight over her teensy-tiny struggles and even her tiny deaths.

Because I am such a dispassionate benefactor, I don’t feel any pangs of guilt when I kick down lampposts or kill the hell out of nonhuman creatures. I am as much a god of destruction as I am of grace, I guess: the world of Diablo III is my ashtray. So I have a lot of feeling – and then again, I suffer a real lack of feeling – for Diablo III. This terrible ambivalence, this objective complacency, explains how I’m able to feel little stress anytime I encounter some boss-level enemy.

As an anxious person, I have a stress continuum. First-person games are the most stressful, by far; “adrenaline” is seldom a comfortable sensation. In an FPS, especially for those of us who have short spatial working memory, making a geographic space/time assessment is not always easy (see: Jenn spins in one place and shoots like an idiot). For others, stepping into the shoes of a gunman can be downright stomach-roiling: “By 1996,” Heather Chaplin writes in Smartbomb, “the medical profession was recognizing DIMS, or Doom-induced motion sickness, as a medical term.”

No, thanks. I play better with third-person games, probably because I am farther from the action. Third-person games are lower-stress – and here I mean “slightly less panic-inducing” – because I, the player, can more easily estimate where my avatar is in time and space. The over-the-shoulder viewpoint is somehow more accessible, too; even the greenest player can pick up and play Katamari Damacy without a hitch.

Diablo III is, for me, low on stress. From a top-down, isometric vantage, every sprite’s location is readily apparent. The sprite itself is yet another walking, hopping landmark. Meanwhile, every command of the cursor is the equivalent of stage direction. This perspective suggests a space/time objectivity that is almost Godlike. It’s a geographic omniscience. I mean, I can see through walls, here. But isometry is almost always distorted. Every angle and dimension is subtly tweaked: in lending you, the player, a Godlike visual objectivity, isometry has to lie to you. 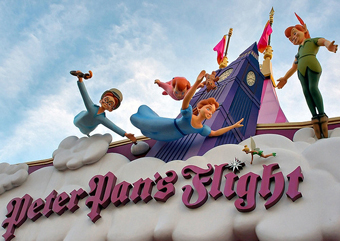 In theater, the “raked” stage – the plane an actor might walk across – is another type of spatial distortion. It’s easy for the audience to see the entire stage and make sense of its whole, while the slope itself is not obvious to the audience. It is a deft illusion – a magic trick – and it mostly works.

I haven’t been to Walt Disney World since I was eight years old. A theme park like Disney World, for me, evokes being trapped in an actor’s nightmare, because the whole place is a soundstage. Its architecture employs a lot of theatrical illusory techniques like foreshortening (famously, the buildings lining Disney’s Main Street, U.S.A. use a “forced perspective,” so that they all appear taller than they really are).

For an 8-year-old girl, I did not have much of an imagination. During a ride called Peter Pan’s Flight, when I was supposed to believe I was flying over London, I stared down and only saw robotic miniatures, an elaborate clockwork. This perspective did not make me feel Godlike at all; rather, it made me feel ill. The magic trick did not work on me. There was a gaping disconnect in how I was supposed to interpret my experience and how I literally, spatially read it.

Here is something I learned recently: the first version of Peter Pan’s Flight, which opened in 1955, was something of a failure. Peter Pan did not appear in this early draft of the ride, because you were supposed to be Peter. In a sense, the ride was supposed to be experienced in the first person, not in the third. But spectators didn’t feel like Peter; they felt like birds, and they collectively wondered why Peter Pan had disappeared from the narrative.

I have the same difficulty reconciling “space” and “distance” in Diablo III. Who am I supposed to be, anyway? I am certainly not Jaelym, the Tiny Destroyer. Who am I? Where am I? Am I very close to the action, grappling with miniatures? Or am I far away, clicking from a comfortable, divine distance?

Or does it matter, even? Whether I consider myself either suspended high above or just on the outside of a picture window, perhaps the outcome is the same: I am a benevolent spectator and little else. And every click of the mouse is only another tiny, darling intervention.

Jenn Frank spectates from her lofty perch, occasionally intervening on the real world via Twitter @Jennatar.

Foreign Affairs: How to Make the Perfect Wrestling Villain