Growing up in the 80’s, pro wrestling was the perfect morality play.

Unlike today, where fans boo the relatively virtuous John Cena in favor of the infinitely cooler CM Punk and Daniel Bryan, the lines between good and evil were very clearly marked, especially in the WWF. At the top, you had Hulk Hogan, who famously extolled the virtues of training, saying your prayers and eating your vitamins. On the other side, you had a number of nogoodniks who were ready to subdue Hogan by any means necessary.

While Hogan feuded with the likes of Big John Studd, King Kong Bundy and “Macho Man” Randy Savage, the bulk of his feuds seemed to be centered around foreigners who wanted to harm Hogan as a way of harming our American way of life. The Iron Sheik. Nikolai Volkoff. Iraqi sympathizer Sgt. Slaughter. Even “Rowdy” Roddy Piper, to an extent. It seemed like the easiest way to make the fans boo a wrestler was to drape him in a foreign flag. It’s a common enough trope that even Futurama spoofed it in the episode “Raging Bender” with The Foreigner, a bolero jacket clad competitor in the Ultimate Robot Fighting League: “I’m not from around here! I have my own customs! Look at my crazy passport!” 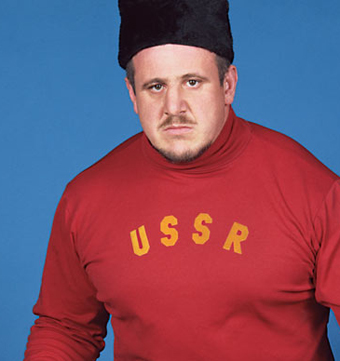 Granted, much of this was born out of Cold War sensibilities. The US and USSR, while not engaging in active warfare, were stockpiling military influence and weaponry just in case. It was very easy for Croatian weightlifter Josip Peruzovic to make the transition from tag team wrestler (as Bepo, one half of the former WWWF tag team champions The Mongols) to Soviet stooge Nikolai Volkoff. Volkoff was a regular thorn in the side of former heavyweight champion Bruno Sammartino during the 1970’s, but 10 years later Volkoff ramped up the rhetoric by singing the Soviet national anthem before his matches, both as a singles wrestler and as part of a tag team with the Iron Shiek.

Indeed, the “evil Russian” was a common archetype in wrestling. The easiest way to turn mid-carder Jack Victory into an intimidating figure in the NWA was to throw a red mask on him, team him with Ivan Koloff (who was Quebecois), and dub him The Russian Assassin. Likewise, the NWA shaved Scott Simpson’s head, told him to speak with an accent, and he became wildly successful as Nikita Koloff, Ivan’s story line nephew. Nikita would actually be the first of his “Russian” brethren to be cheered, when he rededicated himself to good in honor of longtime rival Magnum TA, whose career was cut short by a 1986 auto accident. Likewise, with the dissolution of the USSR, it was only natural that Volkoff would change, and he eventually turned into a force for good. Instead of being billed as a Muscovite, Volkoff became Lithuanian, and his status as a symbol of freedom allowed him to retire as a sympathetic figure.

The Iron Sheik never had the advantage of thawed diplomatic relations to soften his character. An Iranian immigrant himself, Khosrow Vaziri intended to use his amateur wrestling background as a stepping stone to the Olympics, but he opted to go pro, training with Verne Gagne in Minnesota. But with the Iran hostage crisis of 1979, Sheik saw his character follow a similar path to Volkoff’s, and he became reviled simply for being Iranian. Sheik embraced the character and saw himself remain a top heel for most of the 1980s, both as the man who ended Bob Backlund’s six-year WWF title reign and as 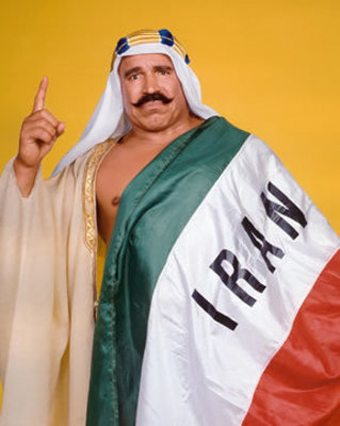 a WWF tag team champion with Volkoff. Sheik was a foil for Hulk Hogan even six years after he lost the WWF title to the Hulkster, when he aligned himself with Sgt. Slaughter after the longtime hero turned his back on America.

Sheik remained a heel through retirement, but found himself with renewed popularity after a particularly profane interview he did went viral. Between that and a number of appearances on the Howard Stern Show, Sheik has become a popular figure on the Internet. His very active Twitter feed, where he rants and raves about his former rivals in the ring (Hogan and the Ultimate Warrior are common targets) and pop culture figures (he really hates Chris Brown and Snooki), has over 100,000 followers.

The Iron Sheik served as an inspiration in many ways for Muhammad Hassan. Drawing partially on Mark Copani’s own life as an Arab-American (born in Jordan, raised in Syracuse, NY), Hassan originally campaigned against post-9/11 stereotypes. But rather than embrace the debate, WWE largely pushed Hassan towards those same stereotypes. He took on a Farsi-spouting manager, Khosrow Daivari (no doubt named after the Sheik) and began wearing Arab headgear, playing on fears generated since 9/11 and the murders of Daniel Pearl and Nick Berg at the hands of Islamic fundamentalists.

In a bit of poor timing, Hassan was set to enter a high-profile feud with the Undertaker the same week as the 2005 London bombings, with an attack involving Hassan and a number of masked men choking the Undertaker with a garrotte on Smackdown. While the segment aired unedited on UPN, the network pressured WWE to end the story line immediately. After losing to the Undertaker on PPV later that month, Hassan was never seen on WWE programming again, while Daivari would leave for the independent circuit and TNA two years later.

As long as there is a great evil out there, it doesn’t matter how global our society becomes; wrestling will never run out of villains.

Hosting Queerness in Star Trek: The Next Generation
Previous Post

Waa! In Defense of Waluigi