I recently watched Mission Impossible: Ghost Protocol on DVD, and one of the trailers I was forced to sit through was for the upcoming G.I. Joe sequel, G.I. Joe: Retaliation. My first reaction was surprise, because the first movie was, by my recollection, terrible. But as I watched this trailer, I felt strange. Unsettled. What was this emotion? Anticipation? Excitement?!?

This is a sequel to a crap movie. How could I be excited for it? After all, nobody was like, “I’m super psyched for Transformers 2.” It just came out and people who enjoy that kind of shit went to see it because, deep down, they hate themselves. But by the end of this trailer, I turned to my wife, who has to put up with me saying stupid shit like this all the time, and said, “I am super psyched for that G.I. Joe movie.” She is a lucky lady. 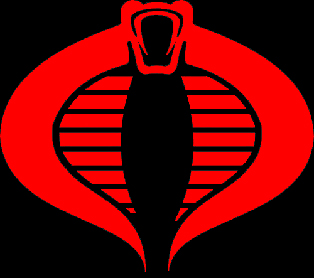 The first movie, G.I. Joe: The Rise of Cobra, was not good. I didn’t expect it to be after seeing the ads, where the characters were jumping through buses wearing robot suits. That scene turned out to be one of the more interesting parts of the movie. But the film was an advertisement. Much like the Star Wars prequels, scenes existed only to stage expository dialogue and put characters in new outfits to add to Hasbro’s toy catalog. Of course, it’s hard to fault Hasbro for making a bad movie because they was more concerned with toy sales.

This is especially true, because I think I remember the original toys more fondly than the cartoon. But the film lingers on a confusing and convoluted backstory between Duke and Baroness, where they were once in love, but Duke left her like a giant asshole, because he felt bad about her brother’s death. I repeat, HER brother died, but he couldn’t deal with how bad HE felt about it, so he ditches her. He literally shows up at the funeral on a motorcycle, watches from afar and then drives away, never to speak to her again – until she becomes Baroness. Ridiculous. Channing Tatum would never do that to a woman.

The biggest problem with G.I. Joe 1: The Joe Movie to End All Joe Movies, was the number of OOFM moments. OOFM™ is a term I just coined before your eyes. It stands for, “Oh, Okay Fuck Me,” and it refers to the frustration you feel when something idiotic occurs in a movie and you realize the filmmakers really don’t care about you, or your reaction to the idiotic thing they just showed you. It’s as if the filmmakers are like, “Hey, Audience – Fuck You.” And if you intend to keep watching, all you can do is say to yourself, “Oh, Okay Fuck Me.” I knew I was in trouble the instant the movie started. It’s a G.I. Joe movie and the first scene takes place in 1641. It depicts Destro’s ancestor, a Scottish “arms dealer,” being violently placed into a Destro mask for selling whatever amounted to arms in 1641. And even worse, the movie ends with an assault on an underwater lair by Joes driving manta ray underwater-fighter-jets. OOFM! The beauty of this new acronym, which I assume we have all completely embraced, is that it matches the huffy sound you involuntarily make when a filmmaker drops an OOFM on you. 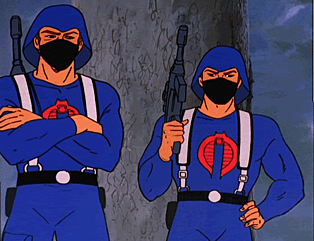 So, why did I experience this elation when I saw the new trailer? It couldn’t just be Channing Tatum, could it? Maybe. But a while later, the image that stuck with me was the shot of Cobra banners unfurling down either side of the Truman balcony. That’s when I knew it was Cobra that was drawing me in. How could you not love them? They are cartoon fascists, with their awesome, boldly-colored uniforms. Their simple, blood-red snake icon rivals the Thundercats’ symbol for ultimate coolness, though Thundercats may still have the edge because I’ve never met anyone with a Cobra tattoo (I’ve met several people with Thundercats tattoos).

Any self-respecting villainous organization needs a compelling leader, and Cobra Commander is the most wonderfully-crazed leader one could hope for. The Commander is practically lovable with his delusional pursuit of power. This guy wants to rule the WHOLE world. It’s so ridiculous, it’s adorable. I definitely want a lot of Cobra Commander in this new movie, with plenty of bat-shit, crazy hissing about taking over the world. I feel like his psychotic ambitions don’t have a properly thought-out endgame. Like, the Commander doesn’t really have anything planned for the day AFTER he takes over the world. He’d sign treaties or whatever, giving him total control of every country on the planet. But that night, sitting on the window seat in his bedroom, he’d stare out the window, clutching his favorite stuffed animal, paralyzed by his own success and writing poetry like a wistful 13-year-old.

Of course, there’s more to Cobra than the faceless, well-dressed infantry and cuckoo-bird ruthless/hilarious overlord. It also has its share of bizarre secondary characters, including a dude who can shape-shift to look like anyone and a guy who wears a metal mask on his head. What more could you ask from a criminal syndicate? Oh, you could also ask for a ninja. Storm Shadow has you covered. As a kid, he was always my favorite bad guy, just as Snake Eyes was my favorite Joe. Like every kid, I just assumed that at some point I would be a ninja. Now, I’m an attorney. OOFM. The best part of the first movie was the lengthy flashback showing Storm Shadow and Snake Eyes as children. There is a bitchin’ fight scene between these two kid actors that convinced me we need an action movie where the cast is entirely comprised of 10-year-olds. Maybe they can make a prequel. 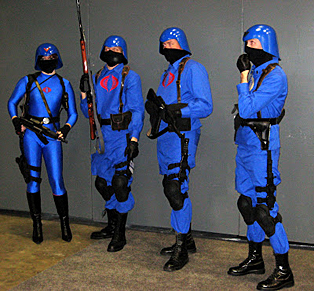 This trailer for G.I. Joe 2: Pig in the City has rekindled the excitement I once had for G.I. Joe. The basic plot, so far as I bothered to understand, is that Cobra has inserted Zartan in place of the President, paving the way for Cobra to achieve its goal of global domination. The Joes have been castigated as treasonous scum. Cobra is winning. Apparently, the American public saw all these intensely uniformed motherfuckers stormtrooping around and agreed to let them handle national security and redecorate the White House with their gang symbol. That makes sense. The trailer also shows a sword fight where everyone is swinging and dangling from ropes on the side of a mountain. This looks badass to me right now, but any Cirque-du-Soleil-style ninja sword fight on the side of a mountain has OOFM potential. Also, Bruce Willis is apparently playing THE G.I. Joe, whatever that means. The trailer says he’s the reason they’re called the Joes, and he is brought out of retirement to assist in the revolt against Cobra. This sounds retarded, but I won’t let it bother me. After all, the first movie was all about nanomites.

In thinking about Cobra for the first time in years, I’ve reawakened the child in me. The child who enjoys murderous tyrants. He was a cute kid. But this excitement means I’m doubling down on this movie. I’m allowing myself to get into it. I’ve started reading the G.I. Joe: Cobra comics because I heard they were good. They are. For some reason, I’m really into how Cobra would operate if they existed in the real world. Are the soldiers paid on the 15th and 30th? Do they have direct deposit? How many vacation days do they get? Did Destro and Baroness make a training video or are new recruits simply shown a PowerPoint? I doubt G.I. Joe 2: Nerds in Paradise will answer these questions for Cobra’s human resources department. But I’ll let myself be psyched. I might even rewatch the first movie, Cobra: First Blood. Of course, I would need to get super drunk or maybe meth it up first.

Check out the other (way cooler) trailers here and here. Ed Coleman has now accepted that he will never be a ninja. Follow him on Twitter @edcoleman78.
[Editor’s Note: Paramount has announced that G.I.Joe: Retaliation is being pushed from its June 2012 release date to March 2013. In the meantime, get your Cobra on with IDW’s superb G.I. Joe: Cobra comic].

GoldenEye and the Politics of Espionage