I picked up Batwoman on a recommendation from a friend. I had passed on the title previously because, while I enjoyed Kate Kane’s appearance in 52, I had no desire to follow her in her own series. What I found, after reading this issue, is that I’ve been missing out on some of the best art to come out of the DC machine in years.

Previously, Kane had been training Flamebird to be her sidekick, while trying to avoid Cameron Chase, a D.E.O. agent working under Director Bones. Bones’ obsession with Batman led him to have Chase actively pursue Batwoman in the hopes of learning her identity.

Kane is indisposed for the beginning of the issue, as she’s having a romantic night with her girlfriend, Detective Maggie Sawyer. Chase, however, gets lucky when Flamebird tries to make a name for herself by battling criminals without Batwoman’s help. The results are violent and painful. Meanwhile, Kane’s trying to track down a demon spirit that’s kidnapping children. After Flamebird is revived, she spits out the words, “Kate Kane,” leaving Chase to call in her boss to return to Gotham City. The issue ends with Bones standing on a helipad in the snow, smoking a cigar and telling Chase that they’ve just unmasked “one of Batman’s shadow soldiers.” 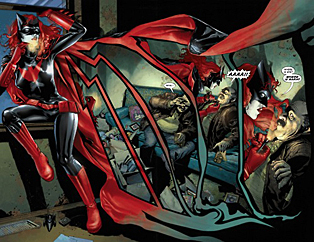 I struggled to understand the story in the first few issues, as the supernatural connection feels out of place in a Bat-comic. Not that Batman hasn’t battled supernatural beings before – it’s just that most issues have logical explanations for the villains. The explanation for this should be mind-blowing, as I have no friggin’ clue how they’re going to explain a kidnapping spirit that pours tears down the throats of her victims.

If the thought disgusts you, you should see the pictures.

Which leads to the strongest aspect of Batwoman: J.H. Williams’ art. He uses several different styles, even on a single page. For example, one page has Polaroid-type shots of Kane getting intimate with her girlfriend. These are illustrated in black and white charcoal art. The main page, however, is a battle between Flamebird and some thugs. This is illustrated in Williams’ traditional style, but he gives the costume a sheen, like it’s made of patent leather. Every illustration that has a costume in it uses this design – Dave Stewart’s sleek colors accentuate the emotions of the panels, as the comic relies heavily on emotional design. Additionally, Williams uses a third type of art in the comic, one that’s reminiscent of Michael Allred’s art in iZombie.

The page construction is also a celebration in visual beauty. One page in particular has Batwoman on the left side, and her cape creates a flow of panels, each jagged and unsettled. The effort Williams has to put into this comic seems staggering, but the results are phenomenal.

I can’t get enough of this book. It’s a visual masterpiece, and it moves Batwoman beyond the realm of comics into the world of art. Williams needs to be celebrated for his work because while the story is getting better, the visuals carry the comic.

I’m in awe of Williams’ work, and I hope you will be too. 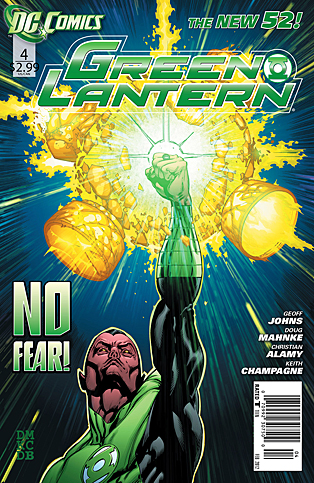 While not my favorite of the week, Green Lantern does have a strong story. I thought by this point the issue of Hal’s ring would be resolved, but while we wait for Jordan to get his ring back, we’re still treated to a tale written mainly about Sinestro. Readers have to stick through Sinestro’s story, because I’m sure the ending will be epic, like all of Johns’ other work.

While Hal tried to destroy the yellow battery terminal in the last issue, he’s stripped of his power in the beginning of this one. Hal ends up draining the ring’s energy using its last bit of power to make a construct of Carol – the one thing he wants to see before dying.

Sinestro, meanwhile, battles the Corps he used to control. When they realize they can’t remove the ring, they lock him up with the rest of the people of Korugar – people that hate and fear him. Under Hal’s guidance, Sinestro creates a batch of green rings to empower the Korugarians and allow them to help Sinestro break out of jail and defeat the yellow Corps. Their anger with him, however, leads to him facing off with the people he terrorized – but now they have power rings.

The issue is another solid effort from Johns, even if it feels like he’s stalling a bit. Johns has worked especially hard at developing Sinestro’s character, and while he’s not likable, he’s tolerable, and one can’t help but feel for him. I’m empathetic to Thaal, not because I want to be, but because he has a lot of redemption within him. I think one of the smartest things Johns ever did was to bring Sinestro back on the Green Lantern side. He doesn’t have to be a hero, nor does he have to be liked by the rest of the Corps. In fact, he doesn’t seem to care either way (as evidenced in previous issues).

Thaal is supposed to be the greatest Green Lantern to ever wear the ring (behind Abin Sur, of course). So far, however, we haven’t really seen him do anything to prove that. I’d like to see Sinestro kick some ass and use the ring in ways Hal’s never thought of. Hal should spend this arc becoming the kind of Lantern he should be. The dilemma, of course, would be that he learns at the hands of the man who almost dismantled the greatest peacekeeping army in the universe.

I want something to happen soon. Hell, I need something big to happen to stay interested in this story. Every Green Lantern issue Johns writes is good. Some, however, just happen to be better than others. And those phenomenal issues usually involve Hal.

So get the damn ring back on his finger, Geoff. 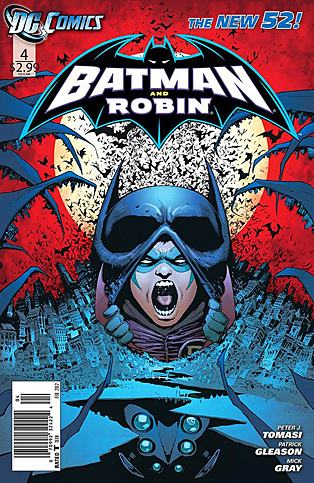 Bannen’s Book of the Week: Only six pages of this comic involve any action at all. The other 16 are full of dialogue and are pure ecstasy for any Batman fan. As in Green Lantern, Peter Tomasi spends the issue developing the conflict between the characters, but his dialogue and character interactions make this one of the best issues I’ve ever read.

After being captured by the villain Nobody – an old acquaintance of Bruce named Morgan – Batman and Robin find themselves tied up in the rotting frame of a car, parked at a drive-in theater. Here, Nobody goes over Bruce’s life as Batman and all the pain it’s caused him. He tells Bruce that had he just killed his villains, none of the continuous murders would have occurred. He hopes to kill Bruce and free Damian from the shadow of the bat. As he’s about to disintegrate Bruce’s face, Alfred swoops the Batwing in (from a remote terminal) and drives Morgan away.

Afterwards, Bruce and Damian fight about how Damian feels Bruce doesn’t respect or trust him. After he storms out, Damian goes to his grandparents’ graves and tells them their son is a “stubborn ass.” Out of the darkness, Morgan appears – dressed as Nobody – and offers Damian the chance to learn from someone who “won’t hold back.” Damian is left standing at the grave, his face shadowed, his closed hand squishing the life out of a lightning bug.

Tomasi is phenomenal at playing up the father/son conflict in this series. Damian has quickly become one of the best characters written into the Batman universe, and while Gleason draws him as a little kid, there’s always a danger lurking below his surface, like he’s a live wire waiting to be picked up by bare hands. The intensity with which Tomasi writes him – and Gleason draws him – makes him the standout character of the issue. As always, Alfred is there to provide Bruce with an external focus, a voice of reason that shows him the point he’s too stubborn to see or admit. Damian, for the first time, saw his father as a mortal being – and it scared the hell out of him.

I don’t do the dialogue justice, but I can tell you that it reads like actual speech and is so well done that readers can tell that Tomasi has Bruce, Damian and Alfred’s voices all down to perfection. He’s captured the souls of each character and done a spectacular job of presenting them to readers. Not a single word is wasted (save for the stereotypical, “Any last words?”), and while the word bubbles clutter the pages, at no point does the story drag. This kind of character development is rare, and I can only emphasize that few writers are able to capture the feel of a character the way Tomasi does.

Much like Scott Snyder, Peter Tomasi knows how to craft a tight story, as well as use dialogue effectively. I would even love for Tomasi to write a comic that only shows Bruce and Damian arguing for 22 pages. Without a lick of action, the story would still read well.

The intensity of their discussion and the earnestness of their voices make Batman and Robin the book to own this week.

Brian Bannen has finally decided to stop holding back with his enemies. Read about his brutality on Twitter at @Oaser.