“How much stuff do you have here, and what can we make with it?” “That depends.” “On?” “What you can imagine.”

One of the simplest ways to recognize media that’s getting videogames wrong is to look at how it treats the rules of gaming. If a television show depicts a videogame where the rules don’t make sense, a gamer will probably recognize that as wrong. Community’s “Digital Estate Planning” seems to flirt with that wrongness, but it actually incorporates several different styles of gaming, utilizing the medium for conflict and comedy. There is a constant interplay of a gamer with the game, testing their limits, seeing how they interact with one another, where they bend and where they break. Community gets that right. 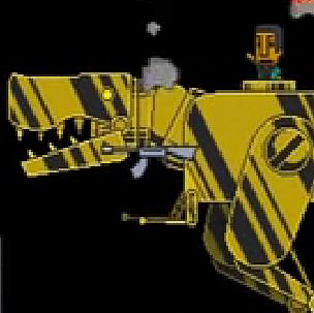 In one of the most famous games of all time, Super Mario Bros., one of its apparent rules (and a rule for most games) is that you cannot act outside of the game screen. In an underground level, a row of bricks across the top of the screen indicates “undergroundness” and seems to reinforce that rule. Yet there are moments when you can guide Mario outside of the expected screen, onto the bricks on top, and run to a secret Warp Zone where you can move ahead significantly in the game. This occurs at multiple points.

An apparent rule turned out to be a false guideline, and in so doing, became a new rule: you can skip ahead if you can get above an underground level. The Japanese sequel to Super Mario Bros., released in the United States as The Lost Levels, initially seemed to behave as if this rule held true. But its Warp Zones actually teleported the player backwards. The rules of the second game subvert the player’s expectation of the rules from the first. The exploration and interplay is necessary to understand the games.

That’s the kind of interplay that other-media representations of games miss, especially when the games are supposed be do something exciting and new and different. You’ve seen it before – a character says, “This game will blow your mind!” while hooking up a virtual reality system that immediately turns into The Matrix or the holodeck from Star Trek: The Next Generation. We don’t have videogames that allow for that kind of ultimate freedom and imagination – or if we do, they’re Second Life, and it’s questionable whether they’re even a game. 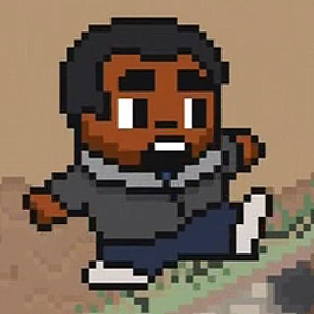 Well, we didn’t have that kind of game before Minecraft. It’s Minecraft that needs to be grappled with in order to put Community’s recent “Digital Estate Planning” episode into context.

“Thanks for the advice, but I think we can choose how we want to play.” “I suppose you can.”

The storyline of “Digital Estate Planning” goes like this. Pierce Hawthorne’s (Chevy Chase) racist, belligerent, father has died. The elder Hawthorne was also a successful businessman, estranged from his son. So he forces Pierce and his friends, the rest of the cast, to play a multiplayer game, where the first person to sit on his throne inherits his wealth. (The videogame format is chosen because Pierce once told him to invest in videogames, which was ridiculous since “arcades are closing all over the country!”)

At first glance, the game appears to be a 16-bit (Super Nintendo-era) platformer or brawler. It shows some RPG-style numbers during fights, but the characters interact primarily through jumping and punching on a two-dimensional plane (the opening sections of the game allow the players to move up and down, similar to Double Dragon, but outdoor sections only allow left-to-right movement, oddly.) Many discussions of the game, and even the Wikipedia entry, call it 8-bit or NES-style, but this isn’t quite the case. First, the character avatars are far too detailed and colorful, and second, the music is too dense in terms of channels. Yet even calling it 16-bit isn’t quite the case: the game that looks the closest to Community’s Journey to the Center of Hawkthorne is Terraria, a computer game from 2011.

This isn’t an accident: Terraria is an adaptation of Minecraft that fits in two dimensions, and one that uses a graphical style that deliberately evokes 16-bit gaming. The first associates it with player-driven mechanics and creativity. The second associates it with classic gaming that many viewers, who probably haven’t played Terraria or Minecraft, will still be able to understand and enjoy.

“Each baby is capable of writing custom code, which means you can make one baby that tells another baby what to do.” 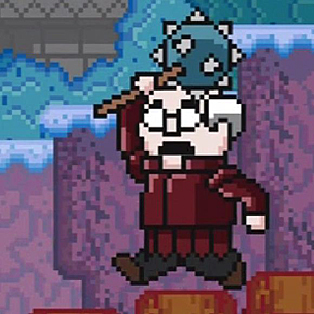 The mechanics of Hawkthorne are shown to be not those of 16-bit platformers/RPGs early on when the antagonist, Gilbert (assistant to Pierce’s father), attacks the main characters by opening an inventory and using raw materials to craft knives.

But the real demonstration of the openness of Hawkthorne comes at the end of the game. After being defeated by Gilbert despite their power, the cast members return to Abed, who has stayed behind in-game to build a relationship with the milkmaid Hilda, through whom he can access the most powerful creative components of the game. When Abed declares that he and his army of baby Abeds are limited only by imagination, it sounds exactly like those terrible depictions of videogames I mentioned earlier.

Except it’s not. In Minecraft, people have actually used its game mechanics to build working computer systems within the game. Players have built massive, incredible Game of Thrones recreations. A water jump. Working train stations. Roulette wheels that actually let you gamble. I don’t know if anyone has created a fire-breathing robotic dinosaur in Minecraft, as Abed does at the end of “Digital Estate Planning”…but they have built a cat fountain!

“Shirley, these things happen in videogames.” “They do?” “Yes. We can’t get caught up on real-world morality. We have to survive. And win.”

The episode’s best scene takes place when the party arrives in the village for the first time. Immediately, Annie and Shirley, the goody-goodies of the group, go shop for equipment. While there, Annie accidentally sets the blacksmith on fire. Instead of working to make it better, she grabs an axe and finishes him off, telling Shirley, in the conversation quoted above, that game morality is different from real morality. That being evil and murdering people for your own benefit can in fact be a good thing. Annie is essentially arguing that playing Renegade in Mass Effect is okay. Ends can and do justify means.

The characters’ separation of themselves from their avatars is what makes this amusing. Once the situation is out of control, Shirley takes charge, killing the smith’s wife and telling Annie to take all the equipment. Yet when they leave the shop and discover that Abed’s non-player character friend Hilda is the blacksmith’s daughter, they hide their actions. They can separate themselves from their characters in the moment, perhaps, but they can’t when they’re back with the rest of their friends. Gamers may be able to describe their nasty actions to one another with ease, but saying, “Oh yeah, I shot my former companion in the back so that he wouldn’t be able to prevent a slow genocide,” can be awkward. 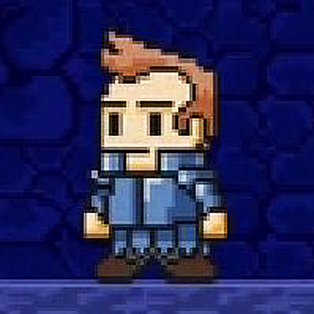 “How do I straighten that painting?” “You can’t. Now stop playing like a girl.”

The combination of traditional videogame presentation with much more modern morality systems and creativity-encouraging gameplay allow Journey to the Center of Hawkthorne to act as all things to all game viewers. For those who are less literate in gaming, it’s coherent. But game fans will be able to see and respect a fondness for the medium in multiple forms – and accurate jokes are better jokes. Community creator Dan Harmon has tweeted about playing games like Minecraft and Dragon Age. With “Digital Estate Planning,” he demonstrated how games like that can be used for comedy. It embraces the past, present and future of gaming, using plausibility and absurdity to create excellence.

Community, Journey to the Center of Hawkthorne, TV PARTY

Ruined by the Bell