This last week, life has unexpectedly taken me away from my home and my consoles, ripping me cold turkey from my Trials Evolution addiction. Going through all my iPhone’s game folders to find something that might quench the cravings for at least a little while, I came across a game I had downloaded and immediately forgotten about: SevenOnly’s jAggy Race. 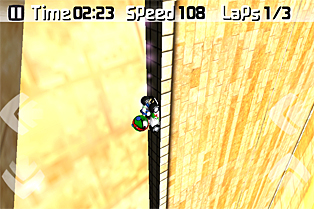 While jAggy Race can’t hope to shine a light to Trials Evolution‘s precise controls and satisfying sense of mastery, it is still an absurd racer/platformer hybrid with a greater concern for getting to the end of the track than getting there at top speed. Controls are simple accelerating, braking and jumping, while the iPhone’s gyroscope can be used to do flips or, more importantly, level out for the perfect landing.

What makes jAggy Race special, though, is gravity. Each track is its own planetoid of sorts. Gravity doesn’t go down but towards the center of the track, meaning half the race could be spent upside-down or on your side. But it isn’t a strong gravity. Take a corner too fast or jump at just the wrong time and you might rocket yourself away from the track and into either oblivion or a buzzsaw.

Other than the fairly forgiving timer in the corner and the promise of gold, silver and bronze trophies, there is little motivation to finish each track quickly. Unlike Trials, there simply isn’t the same room for improvisation and improvement to foster competition for the top of the friends’ leaderboard – either you finish the track in time or you don’t. jAggy Race’s tracks are more enjoyable simply to experience. While the opening tracks are deceptively uninteresting, they soon begin to show a modest mastery of design, with tracks consisting of multiple planetoids and centers of gravity sending you on all kinds of crazy trajectories. You may jump off one to land upside-down and backwards on the next, forcing you to reverse for half a lap. Or you may have to launch yourself off one chunk of land without jumping so as to glide through a narrow gap fenced in by lasers and land on another.

But what is perhaps most interesting about jAggy Race is its art style. Or, perhaps more accurately, its lack of art style. It looks like the kind of cheap, thrown-together 3D visuals that you would typically ignore on a browse of the App Store (or the shelf of pre-owned PlayStation One games at a game store). It’s kind of ugly, but it’s kind of all the more beautiful because of it. It’s not the sterile, inoffensive cartoon stylings of Jetpack Joyride or Angry Birds (or countless others), and it’s not the nostalgia-induced pixelart of indie offerings like Ziggurat or Canabalt (or countless others). Instead, jAggy Race is more… punkish. There’s a unique character to the way things are just all thrown together, seemingly without a care in the world.

Which makes jAggy Race precisely what I love about iOS games. It’s sloppy and unpolished, but in all the right places.

We Can’t Have Dreams