This past February, indie Korean developer Turtle Cream released its first commercial game, only to announce that it would be unavailable in the one place you’d most expect to find it: South Korea. As a way to protest their government’s game regulation policies, the developers have decided not to release any of their titles in Korea (or even with a Korean language option) until these practices are lifted. Korea’s shutdown law prohibits kids 16 and under from playing videogames past midnight, while the cooling-off policy keeps children from playing for more than four hours a day or two hours at a time.

Turtle Cream’s latest project, Sugar Cube: Bittersweet Factory, follows a runaway cube of sugar trying to escape a future that involves being mashed up into a cookie. The game’s distinguishing feature is that its levels are composed of two-sided tiles that must be flipped accordingly so that players can advance through the stage, and the team was rewarded for its efforts by winning Best Title at the Independent Games Festival China in 2010. We recently had a chance to talk to Sun Park about his group’s protest, forming an indie team in Korea, and the crushing pressure that many Koreans face to find work at giant conglomerates rather than strike out on their own. 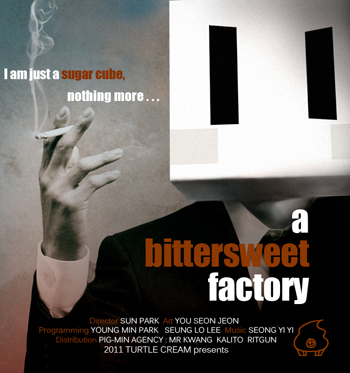 Unwinnable: Can you tell me a little about yourself? What is your role at Turtle Cream?

As our team says, I do the “thinking,” our programmer does “materialization,” and our artist does “expression.”

Unwinnable: How big is your team at Turtle Cream?

S.P.: We are a three-man team: game designer (me), programmer and artist. For SFX sound, I make it from editing free-licensed sounds. For background music, outsourcing with a musician (and that musician is my girlfriend.)


Unwinnable: What was the inspiration for Sugar Cube?

S.P.: Before we started making Sugar Cube (freeware version), we were building a prototype of another platformer, but we didn’t like that idea very much while we built it. “What if the background tiles flipped when the player cleared the stage and proceeded to the next?” At first, that idea was just for changing stages. However, I got the core idea of Sugar Cube from that. We terminated the earlier prototype and started making the Sugar Cube prototype.


Unwinnable: Sugar Cube is your first commercial title. What was the most challenging part about getting the game ready for retail?

However this is the most difficult part: make a game which is worth it to buy.

Unwinnable: In the game, you play as a little cube of sugar that doesn’t want to be crushed into a cookie. Is there a personal side to this story?

S.P.: I got the idea when I ate rice at home. In Korea, there’s mat-tang made with sweet potato. It’s a kind of dessert, fried sweet potato with syrup and sesame. Right after eating mat-tang, I placed the dish in the sink. Some sesame was left after eating and they were gone into the drain. It’s a pity that those sesame are just used for decoration. The story of Sugar Cube, “I don’t want to be a cookie,” started from that thought.

Sugar Cube asks back continuously: “Why must I be something else? Can’t I live as a sugar cube?” It’s the story of us. We are not hired by AAA developers; [we’re] just living life as a full-time indie developer.

Unwinnable: Recently you said that you won’t release your games in Korea or even in the Korean language because of some of your government’s policies. Can you explain the situation for us?

S.P.: The zeal for children’s education in Korea is very high. Many people already know (even Obama knows). Korean parents don’t like anything that interrupts children’s study. Games are the same. Children play games when they must study and that’s what parents don’t like. Grown-ups make the government’s policy. They are parents, or they want to win elections to make parents happy.

Right now, the shutdown policy has started. Children and low-teens can’t play after 12:00 p.m. midnight. Any kind of game including indie freeware must be rated by the GRB [Game Rating Board]. And now they try to charge big fees from big game developers. And more and more. Too many of them.

Unwinnable: Why do you think these policies go too far? 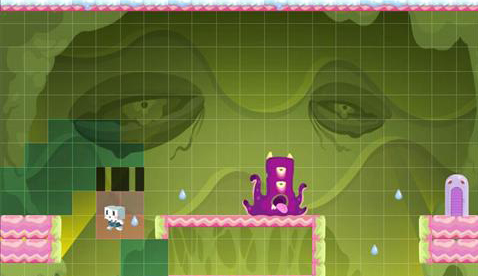 As I think, it’s all about point of view. Many newspapers and media tend to claim games are [part of the] axis of evil. Games are hazards; games hurt society, so they want to prohibit games, like cigarettes and alcohol. Even some members of congress and the big newspapers said that games are another kind of drug.

I’d like to ask you, who are reading this interview: are games really a social evil? Is it bad to seek fun? Everything must be productive?


Unwinnable: Some people say the government is just trying to protect kids from game addiction. What are your thoughts on that?

S.P.: Of course, I don’t protect people who only play games all day – not working at all. If something is a social issue, it must be improved. But prohibition by law is different. Is it a good solution? To minimize the side effect of games, it doesn’t have to be prohibition by law. It could be better to have some filter, rather than policy such as a shield.

Unwinnable: How worried are you about your financial situation if you’re refusing to release Sugar Cube and other future games in your native country?

S.P.: The Korean gaming scene is all dedicated to online gaming. Sometimes users talk about indie gaming in the community, but the indie game market is almost nothing in Korea. Even if we release our game in the Korean language, only a few gamers will enjoy.

As we told you before, our game must be rated by the GRB if we’d like to release our game in Korea. Can we earn enough funds to be rated in Korea? And what about the shutdown? Even our game must have the system to do the shutdown, let younger players stop playing after midnight.

It’s sad that we can’t release our game in Korea, while we are making games in Korea. However it’s not a financial disaster. Anyway, we hope foreign gamers enjoy and play our games more. We are Earthlings, not only Korean.

Unwinnable: Was it difficult to start an indie game studio in Korea?

First, there is no market to sell indie games in Korea.

The second is, there are no friends to communicate with.

As you already know, the Korean gaming market is all dedicated to PC online games. I told you already so let’s skip.

The market doesn’t exist, so developers don’t exist. Recently some smartphone games gained good money and fame, so some smaller teams are united. However they are somewhat different from us indies. We are at Galapagos in many ways.

Unwinnable: Many Koreans feel a lot of pressure to study as hard as possible and find work at a Korean conglomerate or chaebol. Did you feel this kind of pressure too? What pushed you to go indie?

S.P.: That’s it. That’s major, so Korean society doesn’t like gaming. Just study hard; just get a job in a big company. So they hate anything that disturbs studying.

Did every worker at a major company have a dream to be a worker in big company? Maybe not. In recent Korean society, we can’t have dreams. It’s like a BIG COMPANY which produces SIMILAR COOKIES. It’s suffocating. But we don’t like to be cookies. We’d like to be Sugar Cubes, even if we are less-tasted than cookies.

Right now, we are small. However we will improve. We can prove life with a dream is possible. With our improvements, Koreans could consider games as better things.

Unwinnable: What is the toughest and also the most rewarding thing about working independently?

S.P.: Money, money, money! Anything regarding money is toughest. But except for money, everything is perfect.

Even if we are short of money now, we make our games on our own. Nobody else controls us. It’s fun to communicate with others. We wake up when we want, we make what we want, and we work how much we want. We must control ourselves within perfect freedom.

Due to that, all of us consider our games as ‘ours.’ This must be the biggest advantage of indie game development.

A Visitor’s Guide to Sigil

How Valve is Making Dota Approachable