I’m the one posing with a portrait of the queen in an old-fashioned London telephone booth that doubles as the entrance to a West Village cafe called Tea & Sympathy. In another shot, I’m holding a teapot with the Union Jack painted on it, but the Post didn’t use that one.

Why am I on Page 39 of today’s New York Post? Because I am, apparently, a ‘Downton’ Dude – and, clearly, I am not afraid to say it.

Not only that, but because of my job, not to mention my sterling quotes, I am the lede to the story – and I sneaked my way into the headline, too: “Move over, ESPN! Men are getting gabby over Brit masterpiece ‘Abbey'”

You can read the story online (sans picture of me, sadly), so I won’t bother explaining what a ‘Downton’ Dude is.

However, since hundreds of thousands of New Yorkers now know who I am and what I stand for – in an era of great financial upheaval, groundbreaking new technology and the continuing struggle for human rights, I litter a public forum gushing about a British soap opera called Downton Abbey – I feel I must use this opportunity to lead a groundswell of New Yorkers, nay Americans, in feeling free to admit to the world what they really are:

Yes, I cheered out loud, alone on my couch, when Mary and Matthew kissed.

Yes, I was genuinely thrilled when Anna and Bates fell for each other (although Bates, a perennial victim, seriously needs to grow a pair already).

Yes, I rooted for betrothals to break and marriages to mend.

And if you have a problem with that, I now have a series of dry, cutting remarks and a fresh arsenal of disdainful glances at my disposal. 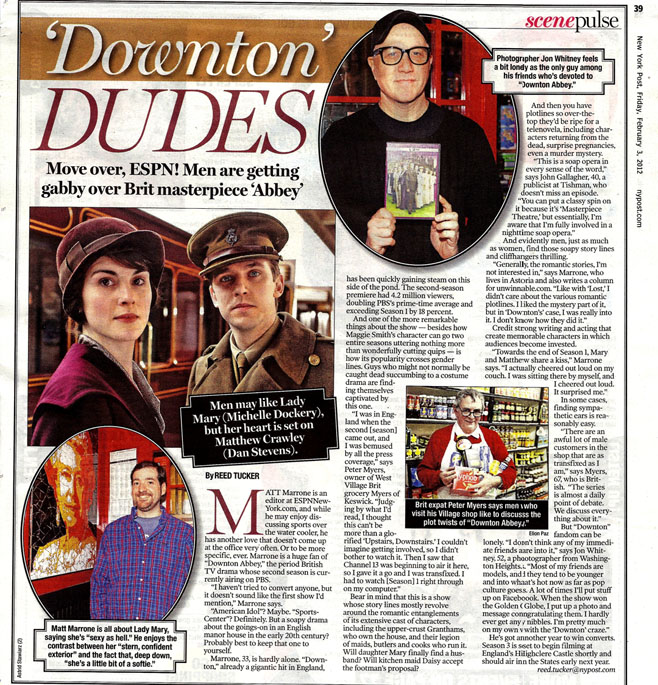 Matt Marrone also watches Breaking Bad. But he’d take Carson over Cranston any day of the week. Follow him on Twitter @thebigm.