I recently saw The Cabin in the Woods with two friends of mine, one of whom had already seen the movie three times since it came out. I was intrigued by his interest and was not disappointed when I saw the film for myself. But over the next few days, I realized the movie was more than just a riff on horror movie conventions – it was a movie about making movies. 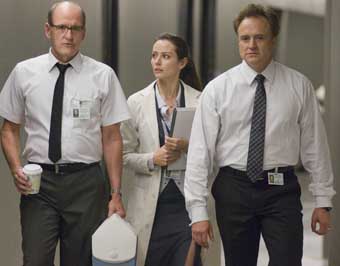 In The Cabin in the Woods, we have a secret underground organization of middlemen, led by the Director, trying to placate ancient and evil gods by sacrificing five very recognizable archetypes. Drew Goddard and Joss Whedon use this setup to play around with classic horror conventions, but what may be read as simple tongue-in-cheek jabs at cliches may have something even deeper hidden in its fruit cellar – we, the audience, are the gods the Director is trying to placate.

The whole movie is a metaphor for the film industry struggling to keep asses in the seats and money in the bank. We, as the gods in control of the industry’s fate, enjoy the rules and the archetypes, but grow restless with endings that do not satisfy our expectations. When we are displeased, we go to our friends and our blogs and our message boards and destroy the worlds that have been created for us.

Gary Sitterson (Richard Jenkins) and Steve Hadley (Bradley Whitford), the lead middlemen, are two put-upon writers who have become complacent in their positions but still hope for the chance to lend some creativity to their project. They are limited in how they can go about their task by all of the rules they must follow, always aware of the demands of the Director as well of that of the audience they are creating for. A new member of the team, the security guard Daniel Truman (Brian White), is a young writer/filmmaker who entered the industry for creative reasons only to find that it is, at its core, a business.

Horror is one of the most marketable of movie genres, so long as you stay within the right parameters. Tits, blood, gore, teen massacre, recognizable monsters with easy-to-understand origins – this is what the masses want and expect to see.

And then there is Rubber, written and directed by Quentin Dupieux. The movie is the story of Robert, a sentient car tire with psychokinesis who wakes into existence for no clear reason a 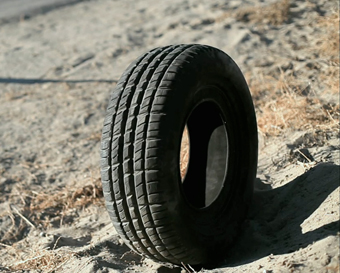 nd goes on a very explosive killing spree. There is no explanation as to why he chooses to use these powers to kill, aside from the fact that it seems to be all he is physically capable of aside from rolling around.

Meanwhile, we are handed a mirror – there is an audience on-screen watching as Robert’s story unfolds. Unlike the gods of The Cabin in the Woods who sit in unseen, silent judgment, the audience in Rubber is a noisy, complaining crowd, open with their judgment of the film and constantly questioning the motives of the antihero tire and the characters around him. One of the actor/filmmakers goes as far as to give a disclaimer that the film is dedicated to the concept of “no reason,” but for this audience “no reason” is not reason enough.

As the audience oscillates though interest, boredom and hunger, the impatience of the filmmakers grows. Their growing contempt leads them to poison the audience and abandon the project. In the end, the film takes on a life of its own. No one involved in making it has any control over it. The final scene sees tires marching (rolling, really) on Hollywood – the creative avant-garde filmmaker rising up against the tyranny of the system, the thesis of the film as a whole.

How does one entertain an audience and still allow oneself to be creative? Creativity, especially in the film industry, always suffers under the yoke of marketability – perhaps it is time for us to celebrate the filmmakers who are willing to throw stones at the gods.

Rubber, The Cabin in the Woods

To Love a City