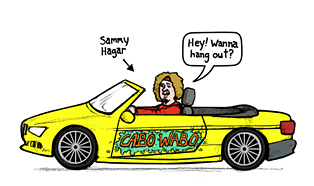 Hi! I’m Bee Tee Dee and I draw cartoons. Unfortunately though, I’m not really that great at coming up with characters. I’d love to say that I’ve created a huge ensemble cast with indelible characters like Pig Pen and Peppermint Patty and maybe a few forgettable, third-tier players like Rerun thrown in there, but I have done no such thing. Don’t get me wrong, though – I do understand why creating memorable characters is a worthwhile undertaking! It’s incredibly difficult to give a flying fuck about a movie or TV show or a comic if you don’t care about the characters! Kind of like how it’s hard to get into a band if you don’t like the singer, you know? You don’t wanna spend all that time hanging out with someone you don’t like. 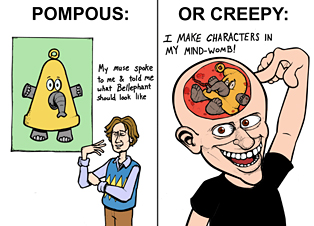 I should probably be more bummed out by my inability to concoct a graceful, elegant creature on the level of Zippy the Pinhead. It could be seen as a failure of imagination, but stop and consider the possibility that maybe I’m just KEEPING IT REAL. If you think about it, the type of people who create characters are either pompous or creepy.

That is probably how we wound up with so many goddamned author avatars. There is, of course, something inherently pretentious about deciding you’re going to become a novelist or a cartoonist, but using an author avatar tends to at least feel less pretentious. I mean, you’re going to put your own voice in there anyway, so why be so sneaky about it? Just because you’re creative doesn’t mean you have to be some wishy-washy relativist who longs to comprehend the whole of humanity. I can’t speak for anyone else, but I’m a bit solipsistic!

In cartooning, a lot of character creation comes down to getting the LOOK of the character right. It’s a certain brand of insanity.

A character’s look often comes down to designing something an artist can draw over and over, well beyond the point of hating said character’s stupid face. But you know, it is kinda intellectually satisfying when characters look a certain way for a reason!

Even Mario, the most famous character ever spawned from a videogame, looks the way he does for boring utilitarian reasons! Supposedly, Mario was given a mustache because mustaches are easier to render within the strict limitations of an 8-bit sprite. It’s a pretty ingenious solution! In fact, it’s pretty astounding that other 8-bit characters didn’t have mustaches! 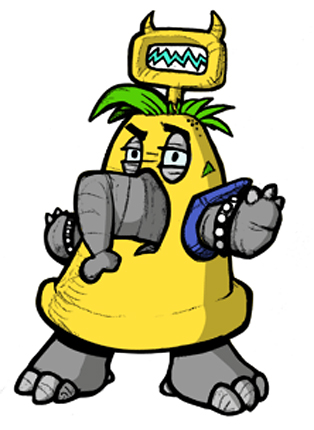 When you consider the importance of complex, believable characters in a narrative, it’s not that surprising that videogames have so long struggled to deliver a compelling story. Videogames have come into the world at a distinct disadvantage, because the earliest characters were friggin’ mascots, and if The Incredible Crash Test Dummies have taught us anything, it’s that mascots generally don’t work well as characters in a fictional narrative. Sure, a stylish, smirking character with badass attitude is perfect for your sidescrolling platformer, but such characters don’t tend to fare very well in a narrative with a lot of depth to it.

I think that some creators are timid about making bold characters, because they’re afraid an audience might balk and say something like, “I don’t know anyone who acts like that.” And it’s not a totally unfounded fear! If a work of fiction clashes too much with our life experience, we sometimes reject it! I mean, has anyone ever actually had a substitute teacher who tried to change your life? This sort of shit has always seemed hokey. 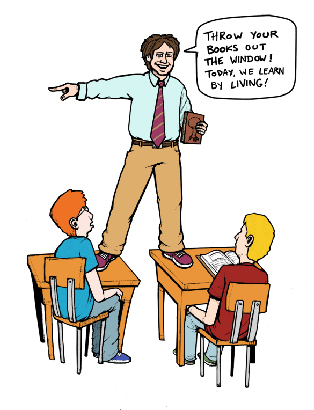 On the other hand, why shouldn’t your characters be implausible? Maybe they don’t have motivations and experiences that the average person can relate to, but that’s why they’re, you know, worth writing about. Historian Lee Sandlin once said of WWII, “Nobody cared about making the system logical, because everything only needed to happen once,” and that’s kind of how it is with characters. Unless you’re trying to create a new archetype (no one is trying to do this), a character only needs to work once, like a bomb!

In a way it almost seems kind of insane to try to create characters if you’re not an actor! Most of the characters people hold dear nowadays don’t just live on the page. Nobody can really add depth and texture to a character in the same way as an actor interpreting the character, especially one that brings their own ideas and experiences to the table.

Consider Willy Wonka! If you’ve ever read Roald Dahl’s Charlie and the Chocolate Factory, the Willy Wonka character is okay, but he doesn’t quite make nearly as much of an impression as Gene Wilder’s snarky smartass. Wilder famously insisted on including one of the movie’s best character moments – the very first time we see Willy Wonka. Wilder emerges from the factory and slowly limps towards the gate before planting his cane and dropping forward, only to somersault onto his feet triumphantly. It’s a great introduction that establishes Wonka’s M.O. without a word of dialogue. This is the sort of stuff you can’t write! I mean, I guess a writer who possessed the genius of Gene Wilder could describe that sequence in a screenplay, but there’s no way of knowing it would work that well. 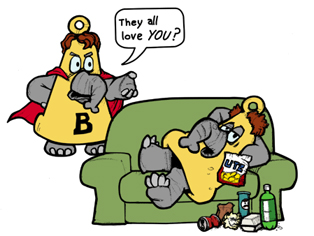 I used to read books with tips for aspiring writers and they’d always give pretty similar advice with regards to character-makin’. Essentially, characters need to be imbued with above-average intelligence, and they need to be highly motivated. It sounds like the sort of stuff you’d try to say about yourself in a job interview! It’s certainly sound advice if you’re trying to create a human pinball to bounce around in a thriller or courtroom drama.

But there is a sort of Salieri effect at work when it comes to the way the counterintuitive way an audience often reacts to characters. As much as we may appreciate reliable, hardworking people in real life, virtuous characters never really seem to endear themselves in the same way that dumbass slackers do! What can I say? We’d all kind of like to fall ass-backwards into greatness.

And falling ass-backwards into greatness is the only way. You could work your ass off writing backstory for your character, you could bring in the smartest people you can find to help you, you could draw the PERFECT nose! Still, your creation might go unloved. It’s kind of scary how little control you have over the way your imaginary friends are received once you foist them upon the public, but that’s the way it is. Like a good character, an audience is often unpredictable!