It’s a story about a man who doesn’t know he’s dead. He still has a life, sort of, but the life he used to know is gone forever. It would be quite a tragic story, but this protagonist has, however involuntarily, exchanged his old life for some sort of superhuman ability, which is significant because he wanted to be a hero in his old life. 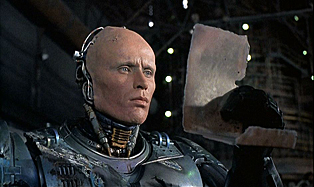 If I were a lazy digital cable capsule review author, I could use that paragraph to describe both 1987’s RoboCop and 2011’s Source Code! Though their narratives are very different, both films feature protagonists who are struck down and became more powerful than you could possibly imagine.

It’s a theme that Unwinnable is quite fond of, the loss of self. But in cases like this, the horror trope is subverted; the individual will hasn’t been claimed by a demonic force but commandeered to complete some public service. Neither Source Code nor RoboCop could be described as horror, but for the 21st-century individualist who’s carved out an identity for him- or herself there is something terrifying about the idea of surrendering all of that for a dubious cause. If it’s a commentary on war, it is at least an updated, more optimistic version of Johnny Got His Gun.

For those not familiar with the video for “One” by Metallica, Johnny Got His Gun is an unmitigated psychological horror about a wounded soldier who loses all of his limbs and senses but remains fully conscious, locked inside a useless body. RoboCop and Source Code present a future in which technology has addressed this type of hellish predicament – sort of! 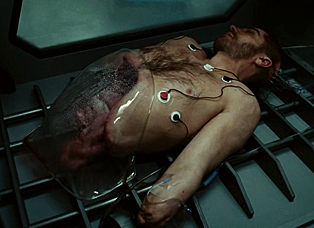 But hey, there is still a fair bit of psychic angst to be had here: While they’ve been stripped of identity in service of the mission, the heroes in RoboCop and Source Code ultimately find that their superhuman abilities are restricted such as to prevent them from completing their mission, at least until they summon enough of their human ingenuity to improvise a game-breaking solution. It’s a heartwarming message, or at least some pleasant species cheerleading: While our crappy, fragile bodies could use some help from bleeding-edge technology, we humans just can’t be beat when it comes to creative problem solving.

So there you have it. No need for a RoboCop remake! We already have Source Code. I mean, OK, they’re actually very different movies, but I’d be willing to pretend they’re identical if it would spare us another pointless remake!