This quote begins the misguided juvenile mess that is Holy Terror. In short, this book’s as blunt as a fart in the face.

The storyline reads like something an angry ten-year-old boy would write if he had bizarre sexual hang-ups and a Batman obsession. It’s ugly through and through and relentless in its tale of a terrorist attack on a pseudo-Gotham called Empire City.

One thing that hovers over the narrative is the fact that Frank Miller originally conceived this as a Batman story. Consider the opening scenes of the heretofore unknown hero, The Fixer, chasing Natalie Stack (a.k.a. Cat Burglar) around Empire City. Miller changed the names, but the book still has a lot of artifacts from the originally-conceived Batman story remaining, right down to a police captain (Dan Donegal) who looks very much like Jim Gordon, mustache and all. In a scene that recalls All Star Batman and Robin, there’s even some implied rain-soaked sex between The Fixer and Cat Burglar. It’s all stuff Miller has done before – Brand Miller going wild.

The closest we get to any “villain” profile is of college exchange student Amina, who gets all of four pages to tell her brief tale of hating the United States. She then blows herself up along with a bunch of other teenagers. Other than that, there is an Al-Qaeda cell composed of a bunch of people with covered faces, and for some reason an Irish guy. Much in line with Brand Miller, there’s even a mysterious character named David who is flanked by two cute Asian women (who are probably ninjas). 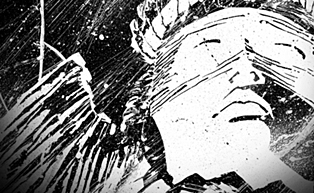 In my recent assessment of Frank Miller, I mentioned how it would be nice to find anything of value in this hardcover. In that respect, I will admit that some of the art in Holy Terror is wonderful in its detail and craft. It’s amazing and sad that Miller has evolved in some ways as an artist and yet lost so much as a writer.

This book is a waste in the sense that you can plow through it in less than an hour and retain little of what you just read. Two vague characters in costumes kill a bunch of racist caricatures who are setting off bombs all over a city. There’s also some obscure political and social commentary thrown in, although it’s mainly just images of politicians and media types like Michael Moore.

Sometimes anger makes for a great creative muse, but in other cases it just yields a product that is regrettable. Oddly enough, Holy Terror reminds me of the situation behind Tommy Wiseau’s angry breakup farce, The Room – a movie created with a serious intent that has since been called a black comedy by Wiseau, after it was apparent that all of the angry ridiculousness couldn’t be taken seriously.

What’s strange is that Frank Miller doesn’t seem to care how ridiculous his work has become – work that teems with propaganda and vitriol and a dose of juvenile noir. I think I will cleanse myself of the experience of Holy Terror by reading a run of Daredevil, written and drawn by Frank Miller 25 years ago. I’ll be wondering all the while what happened to the promising creator of those comic books.