RoboCop is everything that was right with the ’80s. 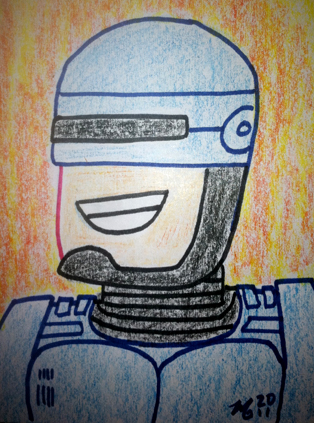 RoboCop was released in 1987, far away from the groovy ’70s science fiction of Logan’s Run, Planet of the Apes and Flash Gordon. It took from movies like Scarface, Terminator and Wall Street and made what is essentially Republican fan fiction. Full speed ahead with Ronald Reagan as president – this is how the GOP wishes they could have been seen. The megacorporation OCP (Omni Consumer Products), the company that made RoboCop and wants to privatize the police, wasn’t even depicted as a bad lot of businessmen. They had the best intentions in mind for the city of Detroit and, at least in the first movie, OCP was portrayed as having a good heart with only a few corrupt people trying to spoil it.

There is much to be said about the social commentary in the movie series but when I first saw RoboCop, I was a kid; I didn’t know what all this was about. I was a young man who thought robots and Ford Taurus cop cars were cool. I knew there were jokes about society – I remember laughing at the Nuke ‘Em game and the SUX 6000 car. I liked how the news reports reminded me of how the story unfolded in The Dark Knight Returns and Max Headroom. I liked how RoboCop’s Detroit had its own version of Benny Hill – Bixby Snyder – who would be more than happy to purchase whatever you are selling for a single dollar. I laughed at these jokes and didn’t know why. At the end of the day, kids love robots. I did then and I still do now.

I had a RoboCop VCR game. It was a VHS tape that had scenes from the movie out of sequence, with the curses edited out. Before each scene, some kind of graphic would come up on the screen and say something like “roll again” or “draw a card, creep.” That game never made sense to me, but I would watch the tape just to see cool scenes from the movie. RoboCop eventually had several bad sequels, a toy line, a cartoon, a TV series and several Canadian made-for-TV movies. All of this is based on a movie that was originally rated X for the violence and gore. Oh, and RoboCop doesn’t swear. Way to go!

Sadly, the sequels never felt as good as the original. I remember seeing RoboCop 2 at the Westwood Theater; my cool older cousin Jim took me. He had a car and we both left disappointed.  The youth-centric movies of the time, like Goonies, Explorers and Home Alone, seem to empower children into making the right choices for a good outcome, but RoboCop 2 was more in line with a movie like City of God or that weird Scott Baio gangster movie, Bugsy Malone. Even, to a much lesser degree, Hostel and Hostel 2 with their inclusion of kid gangs. I love movies that have kid gangs.

Good robots have a good soul. RoboCop is built around the man Alex Murphy – a good cop, an Irish Catholic and family man. That man was gunned down in the line of duty. One of the best moments in RoboCop 2 is when RoboCop tells Ellen Murphy, the widow of Alex Murphy, to touch his skin and see that it is cold. She touches his lip and pulls away quickly, knowing that she was traveling too close to the uncanny valley.

As if to comfort her he said, “They built this to honor him.” So this week at Unwinnable, we too honor RoboCop in all his glory.

Eating baby food like all good robots do, Chuck can be found @JapanDudeGirl. Illustration by Mark Mariano.