I didn’t expect to like this comic as much as I did, especially because on first glance I didn’t think I could take Roberto De La Torre’s art for more than a few pages. But Age of Apocalypse #1 is a great comic that engages its readers almost instantly, bringing them seamlessly into an alternate version of the Marvel universe that appeared most recently in Uncanny X-Force. Given the strong character development and fantastic storytelling, I’m sure I’ll be following Age of Apocalypse and I recommend you do as well.

If you’re unfamiliar with the Age of Apocalypse world, here’s a quick synopsis: In an attempt to help Charles Xavier’s dream of seeing the X-Men become humanity’s saviors, Legion travels back in time to kill Magneto. He accidentally kills Xavier, who is his father, erasing himself from the timeline and altering history. Saddened by his friend’s death, Magneto brings the X-Men to the world. But Apocalypse rises to power and enslaves humanity. In Uncanny X-Force, Wolverine and his crew had to travel to the alternate universe to save Archangel. The intertwining of their stories is where Age of Apocalypse fits. 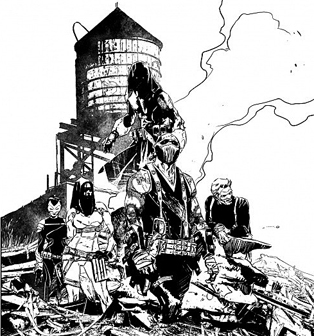 Told through the eyes of a reporter who accidentally crossed over when Dark Beast was broken out of prison in Uncanny X-Force, Age of Apocalypse focuses on a group of mutants who are trying to save humanity, restore a good standing to homo-superior and defeat Weapon Omega – Apocalypse’s servant, Wolverine.

David Lapham throws as much characterization and history into this issue as he can, and the result is a seamless, if dense, read. At no point was I bored with the story, nor did I feel it was cumbersome. Lapham does a fantastic job of establishing the characters of this alternate universe, while still providing enough action to appease those readers who lose the thread if a story is bogged down with too much exposition.

Most of this characterization is done through Harper Simmons, the reporter who narrates the story. His opinions are obviously slanted in favor of the good mutants, but his insights provide unfamiliar readers with an understanding of the alternate timeline. And since he’s new to the world as well, his ignorance is where we learn about the heroes and villains. His explanation of Daredevil, for example, is clear and direct: “In this world they call [Daredevil] Keeper Murdock, Leader of the Overlord’s Hounds, and he shoots every third person.” This simple note gives readers enough background to see a difference between the usual Earth-616 Daredevil and the Apocalypse Daredevil, and its intonation helps elucidate his violent tendencies (which we get to see).

I equate Roberto De La Torre to Sean Murphy. The pages are full of the same kind of structure – jagged lines, compact images and graphic inks. I also think of Marvel’s 1985 and Tommy Lee Edwards’ pencils. If you’ve seen that comic, you know the kind of visuals to which I’m referring. Lee Loughridge gives the issue some nice coloring at the beginning and in the final page, but through the majority of the action, he sticks to strictly depicting the characters rather than trying to fill in the background imagery. We know he’s capable (as evidenced by the first few pages), but by leaving the background detail sparse, he smartly directs the eye towards the action.

I loved this book. I didn’t expect to, especially after the awesomeness that was “The Dark Angel Saga.” I didn’t think anyone could come close to developing characters and creating conflict the way Rick Remender did. But David Lapham has done a great job of picking up where Remender left off, and I look forward to seeing how the rest of this series plays out. If the last page is any indication, we’re in for a hell of a ride. 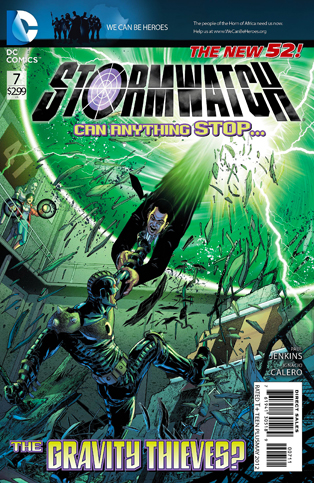 When Stormwatch returned to the DCU, I was excited at the prospect of seeing Midnighter and Apollo again. When I first read The Authority, I loved the gritty violence and temperamental characters, so I hoped Stormwatch would bring some of that back. Instead, it has created its own persona, but still one that is intellectual, engaging and visually stunning.

Paul Jenkins takes over the writing duties for Paul Cornell, but the comic has the same established feel as Cornell’s writing. In this issue, the Stormwatch crew deals with an alien menace that mines gravity. It’s a strange concept but one that is well executed, as the aliens Apollo battles prove to be more than he can handle. Part of the story is taken up by Martian Manhunter and Jenny Quantum discussing theoretical math. Their level of discourse is highly technological but fun to read. I didn’t expect it to be, but I enjoyed seeing J’onn work with Jenny on proving a theorem that becomes vital to the saving of Apollo’s life at the end. While the major problem ultimately isn’t resolved, Jenkins proves that each team member plays a vital role in any given situation. This has serious implications for the next issue, considering they’ll need to work together to solve their problem.

As for the art, Ignacio Calero has a lot to depict in each panel. Some of the work looks computerized, but that may be the colorization done by Pete Pantazis. Most of the images glow, and Apollo’s fight with the alien creature is highlighted by a blue resonance. The alien’s lack of symmetry also makes it a fearsome entity, as it mostly swirls around Apollo while its tentacles ensnare him.

The composition of the book is very dense, as many of the images not only have the characters in the foreground but a majority of detail in the background. This is mostly debris and rubble, but in the scenes that take place in the Stormwatch headquarters, Calero throws in as much technological gadgetry as possible. It makes the image dense, but not cluttered.

I enjoy the character designs for the most part, but Martian Manhunter is Calero’s bread and butter. When he gets to draw J’onn J’onzz up close, Calero always makes him look fierce and powerful. Calero’s Midnighter, however, is not as fun to look at. The slight changes to his costume – namely the spear on his chin – are a bit distracting. He looks like he has a goatee. I like Bryan Hitch’s Midnighter design, where he wore the black overcoat rather than an armor-plated suit. It’s not enough to derail the story, but it irks me enough to mention it.

While the concept of gravity miners may seem silly, the execution is not. Stormwatch #7 is action-driven with a few strong character moments thrown in, but for the most part Jenkins is trying to show us how the group operates as a team. The final pages make for a great conclusion, and I’m looking forward to seeing the resolution. I think Stormwatch is a surprise contender for one of the best books of the New 52. While this two-part story is meant to give Paul Cornell a break, I think Jenkins has proven that if need be, he can step in and write as good a Stormwatch tale. 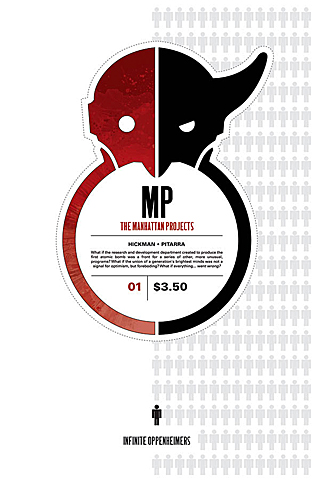 Bannen’s Book of the Week: Given the précis on the front cover, readers already know that The Manhattan Projects is not going to be a historical retelling of Oppenheimer’s work: “What if the research and development department created to produce the first atomic bomb was a front for a series of other, more unusual programs? What if the union of a generation’s brightest minds was not a signal for optimism, but foreboding? What if everything … went wrong?”

Pairing with his art partner Nick Pitarra, Jonathan Hickman brings us the story of J. Robert Oppenheimer, the man who worked on the top secret “Manhattan Project,” a government operation that developed the first atomic weapons. What The Manhattan Projects does is take the well-known story of the project and add another layer to it, one that looks more in detail at the life of the man who would become known as the “father of the atomic bomb.” The result is a great story with a fantastic climax and a book that should be a pick for every comic book fan.

As the book opens, readers are given a synopsis of the Manhattan Project by one of its coordinators, an army sergeant who reveals that he knows a bit more about Oppenheimer than most people. In Hickman’s world, Oppenheimer had a twin brother. At first, the doctor only gives the cryptic statement, “I am not my brother.” But as the comic progresses, we learn why he was so adamant about distinguishing himself. Oppenheimer’s twin brother, it seems, is a psychopath. Throughout the comic, Hickman flashes back to the brothers’ lives as children and then young adults. Before we’re even told that Robert’s brother Joseph is crazy, we can assume it to be so, given Cris Peter’s colors. Every image of the normal Oppenheimer is colored in blue, while every image of the insane Joseph is colored in red. This kind of design utilizes a simple trick, but it establishes personae for readers before the characters are even introduced.

The brothers’ lives are paralleled throughout the story. While Robert examines minerals, his brother examines dead animals. Robert lectures to physics students while Joseph spends his time in a mental institution. This duality becomes important later on, and one can tell where the comic is going before it gets there. It doesn’t make the journey any less fun, though.

After establishing his character, Hickman breaks away from the historical piece to get readers into the truly zany world in which The Manhattan Projects exists. A Torii (Japanese gate) “Zen-powered by Death Buddhists” slams into the middle of the research facility and unleashes an army of Samurai robots.

I’m not making this up.

While it reads as pretty silly, the effect is the exact opposite. It creates a palpable world in which mythological weapons – like Neptune’s trident – can exist. Nick Pitarra does a fantastic job of making this world real, as each page has layers of detail – especially those inside the War Department’s secret compound. When the robots attack, the full-page violence looks like a page from a Where’s Waldo book. And given the eccentricity of the story, some reality has to be established for the fantasy to exist.

I loved every page of this book. While I disliked Hickman and Pitarra’s other project The Red Wing, I find The Manhattan Projects to be a more engaging read, both in its character development and its storytelling. Unlike The Red Wing, The Manhattan Projects is a much more original idea, taking what everyone thinks they know about the atomic bomb but then turning it around and giving a twist to the Oppenheimer mythos.

My advice? Buy this book. I don’t think you’ll be disappointed.