It is with great sadness that I learned the world of comic books, art and film lost a major creative force on March 10, 2012. He was born Jean Giraud in Paris in 1938, though he would later take the pseudonyms of Moebius and Gir. 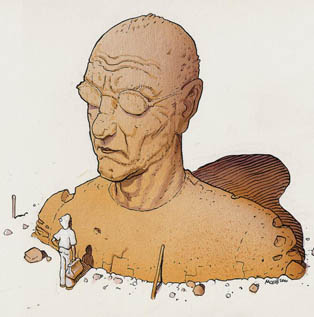 It was under the Moebius name that he produced some of his best known science fiction work, often collected in the magazine Heavy Metal (Metal Hurlant in the original French), which he co-founded with other artists in 1975. Heavy Metal was conceived as an adult-themed alternative to superhero comics and many of the stories fell into the fantasy, science fiction and horror genres while being chock-full of nudity and gore. One of these stories was an ongoing silent series called Arzach – my introduction to the strange world of Moebius.

In the years since, I have seen flying cars, flying dinosaurs, tall towers that pierced the sky and futuristic cities laid out like puzzles. There were monsters, aliens with intricate and colorful technology or even indigenous natives with simple stone tools. Every Giraud story usually has at least one of these things or some combination.

In 1996, at the Starlog that used to be on the main drag in Ridgewood, New Jersey, I picked up a trade paperback collection of Arzach released by Dark Horse. On the cover is a man in a pointy hat flying some kind of pterodactyl. I was in my mid- teens and not so into superhero comics any more and I figured it looked weird enough to give it a shot. From the gorgeous opening splash page and beyond, I was lost in a silent world, timeless and yet populated both with elements resembling our distant past and inventions never seen before. I plowed through it in an hour, but I kept it by my bed and revisited that world regularly. The style seemed so fresh and new to me, but I felt that I had somehow seen it before, maybe in movies or in videogames. Since then, it has been amazing discovering how much Giraud’s contributions have appeared in mediums outside comics – and how much they have inspired. 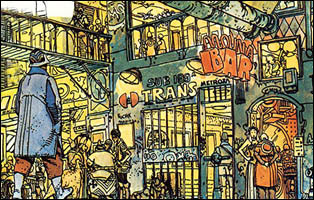 Not too long after my first exposure, I watched the infamous animated film Heavy Metal, which adapted material from the magazine of the same name. While entertaining and debauched throughout, there is a segment towards the end that I’ve always loved in particular. Entitled “Taarna”, it is the story of a warrior woman summoned by her massacred people for vengeance against a mutant barbarian horde. When she first dons her minimal outfit and weaponry, she mounts a familiar pterodactyl-like beast. The flight sequence that follows is lifted directly from Arzach and is a beautiful little segment.

In the years since, I have tried tracking down his work but, sadly, much of it has gone out of print in the US. There’s L’Incal, his extremely influential science fiction collaboration with psychedelic filmmaker/comic writer Alejandro Jodorowsky, and his long-running Western series Blueberry, the classic The Airtight Garage and The Long Tomorrow, a collaboration with Alien screenwriter Dan O’Bannon that William Gibson and Ridley Scott have cited as influences on Neuromancer and Blade Runner respectively. In fact, Gibson shared this story about a lunch he had with Ridley Scott in an October 1992 interview for Details magazine:

“Years later, I was having lunch with Ridley, and when the conversation turned to inspiration, we were both very clear about our debt to the Metal Hurlant (the original Heavy Metal magazine) school of the ‘70s – Moebius and the others. But it was also obvious that Scott understood the importance of information density to perceptual overload. When Blade Runner works best, it induces a lyrical sort of information sickness, that quintessentially postmodern cocktail of ecstasy and dread. It was what cyberpunk was supposed to be all about.” 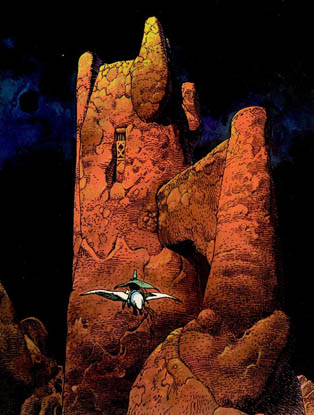 Fortunately, a Silver Surfer collaboration with Stan Lee from 1988/89 entitled Parable will be re-released in May. Hopefully this will lead to enough interest for more of his work to be reissued. Parable is about the only reasonably-priced way to experience his printed work for the time being.

Giraud was not just a comic book artist. He co-created the feature-length animated film Time Masters, released in 1982. Over the years, he had a part in the conceptual and production design work of numerous films including the various Star Wars movies, Alien, Willow, Little Nemo in Slumberland, Tron, The Abyss, and much of the design work on The Fifth Element, which borrows many of its elements from L’Incal. He also did conceptual and artistic design work on a number of videogames including the Panzer Dragoon series. His artwork even graces the Japanese cover of the game.

Giraud’s influence can be still be seen across the creative landscape, with artists like P. Craig Russell and Frank Quitely citing him as an influence, as well as Japanese director Hayao Miyazaki. One of my favorite current comic series that owes much to him is Prophet, from Extreme Studios. Brandon Graham’s minimal yet effective internal monologue and Simon Roy’s outstanding artwork are a wondrous treat to behold, and the lead character, Prophet, reminds me of the silent, contemplative and sometimes cranky protagonist of Arzach. Come to think of it, so does the silent (and sometimes cranky) environment!

Still, no one can replace the master, and it is unfortunate that he will show us no more new worlds. He will live on in his glorious body of work.