“Mass Effect 3 is a great game until the last few minutes, they destroy
everything fans have been playing for in the past 5 years.”

As of writing this, there are over 3,000 signatures on the petition to change the end of Mass Effect 3. That is not a lot of people, but it is enough people to be interesting, especially given the recent attack on BioWare employee Jennifer Hepler. I think there’s something going on here about the types of people who play games (beyond the presence of misogynerds) and how they relate to them.

But first, I want to be clear: I’m not saying BioWare is ultimately responsible for its monsters. I don’t think it’s quite Frankenstein and his creation; the latter, snubbed by the former, is twisted beyond humanity in his formative period and now out for revenge. It’s not BioWare’s responsibility to teach fans basic human respect. The Mass Effect petition is, so far, much more respectful than the attack on Hepler.

Work and you will be rewarded” is the promise of games

Fan culture depends on corporate production to exist. It is the appropriation of things protected by codes of law and commerce that defines a certain kind of active fandom (see Henry Jenkins’s Textual Poachers: Television Fans & Participatory Culture). It used to be that these businesses wanted to maintain control of their property so desperately that they leveraged all those codes to shut down fan behavior (see cease-and-desist orders). They didn’t want people turning their intellectual property into folk texts that individuals could re-edit into tribute videos or write fan fiction about, to remake in celebratory or subversive ways. 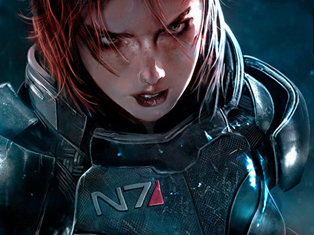 BioWare games exploit these participatory aspects of fan culture in their game design. The company knows that fans like to ask “what if?”, to maneuver characters into romantic relationships, and so they build in the options. They appear responsive to the desires of their fans and so it’s not really surprising that rather than use older forms of remixing like fan fiction, content to be ignored so long as their own version of the world can be created, the fans go to the company itself. Maybe it’s a desire for validation, or some kind of misguided creative impulse.

BioWare has cultivated loyalty and a sense of fan ownership over the object. It’s a franchise’s dream: a loyal audience that will evangelize for your product. Word of mouth is free and trusted advertising; friends share experiences with friends and it brings them closer together. Everybody wins. Fan engagement can be reaffirming and it is certainly complicated – her marketing presence makes the decision to play Commander Shepard as a woman less subversive on the part of the player even as BioWare embraces her.

There’s a dark side to this relationship, however, when fan engagement and ownership turns controlling (and, in the case of Hepler, abusive). It is not blind entitlement. It’s a matter of degree, a matter of misunderstanding the basic relationship between player and designer, player and game, designer and game (and then it’s turned nasty by misogyny).

As in videogames above, so in Mass Effect below. The entire series has been marketed around your input as a player having massive effect on the world you move through. There’s always a tension between us and BioWare’s system, though, and the system always wins. There was a hint of this in The Arrival, when Shepard makes a monumental decision without input from the player. And we never really control Shepard’s interactions outside of combat, do we? We nudge conversations with a suggested subtext rather than the specific wording, pull a trigger to say, “Shepard, be nice (or throw a punch) now!”

At a session on choice architecture at GDC 2012 last week, Obsidian’s J.E. Sawyer argued that it was important for the player to have an idea of consequence before they made a choice. In the second game, there is very little feedback for the system that determines who lives and who dies in the game’s final mission.

But it was the lack of feedback that made that final sequence in Mass Effect 2 more tense. You don’t know what’s going to happen. What if I had made a bad decision as a leader and caused one of my squad to die? The game’s system (and there is a system – these deaths aren’t entirely random) models not individual agency but a paternalistic approach to leadership where survival and success and failure depend not on the individuals’ actions but how they respond to the leader, who, in this case, is the only one blessed with my player agency. You are the Great Human Parent.

My entire team made it through unscathed because I am a good leader who cares about helping team members resolve their personal issues and because I game the system. I would love to see how my choices effect events, but the time investment required makes it unfeasible for me to really play with the character survival system. There is a very real part of me engaging with the game and I can understand how, if you accept the rhetoric of choice and agency and it being your story at face value, and if you believe systems are (or should be) meritocratic, and if you’ve spent money…I can see how frustrating it would be and how you could interpret that frustration as having been cheated.

From the start we’ve been told how important we are to Mass Effect. For some of us that is less about Shepard and more about the entire world. We don’t want to be a character in BioWare’s system. So we crack it a bit. For some of us that means FAQs, or saving and reloading until we get a desired outcome. For others, it means petitions. And for some, it means ugly attacks on a person you’ve turned into a representative of everything you are afraid of.

Don’t be those people.

It is wonderful that people feel comfortable engaging in conversation with the creators of their media (both inside and outside it). The key is, I think, not to let the conversation remain so stunted. Embrace the beauty of needing to be heard, to communicate, to matter, without being twisted by misogyny or commerce or fear of change. Or accept that there are different ways for games to challenge you that can’t be ranked by score and that might extend beyond the limits of their worlds.

Brian Taylor thinks about changing his Twitter name, but he still has like 300 business cards with this one on it.