The iPhone was never meant to play games, but countless game developers made them anyway. Of course, many thousands crashed and burned while they tried to simply jam classical game types onto a touch device, and many more continue to do so on a daily basis. But many others reappropriated the unique functionalities of the hardware and the unique (one could say “mongrel”) model of distribution and instead made games that never could have existed before now. Small games, sure. Perhaps even disposable games, as Nintendo has constantly claimed in defense of the exuberant price tag of its own DS games. But whoever said a disposable game was necessarily a bad game? Maybe disposable is exactly what the iPhone needs. Perfect for a moment, then forgotten in the next wave of releases.

For a column that takes such games, such deviant treasures, as its focus, it seems appropriate to begin with a game as much about reappropriation as the iPhone itself. Manufacturing Content’s Tractor Beam is as simple as it is instantly recognizable. At first glance, you might think you are looking at an Asteroid clone. You do indeed control a simple, white, triangular ship through a field of vector-based asteroids, but this is Asteroid reimagined into a worst-case scenario. Your ship’s engines and weapons are both down. You aren’t flying through this asteroid field; you are stranded in it, drifting through space and just waiting for an asteroid to smash you to smithereens. 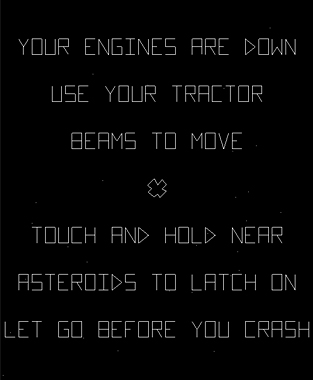 Your ship only has one tool still working: its tractor beam. Touching an asteroid connects it to your ship via a thin white line. The primary outcome of this is the asteroid and your ship are pulled together at full speed, doing nothing but quickening your demise. Against the larger asteroids, the effect is something like a toddler aiming a gravity gun at a bus – while holding the gravity gun backwards. Your tractor beam will, inevitably, put your crippled ship right in the path of whichever lump of rock you just flung yourself at, but it is the only tool, the only mechanic, at your disposal.

To play Tractor Beam successfully is to use the only mechanic the game has in a non-optimal way – to reappropriate it. After several clumsy mis-starts, you learn to pull yourself towards one asteroid (and, horrifyingly, it towards you), and then use the obtained speed to slingshot around another. You fling smaller asteroids out of your path while anchoring yourself to larger ones. Just like Asteroid, you swoop off the top of the screen and back on the bottom. You fling yourself at breakneck speed through one slither of space then break suddenly before the next wall of stone.

Essentially, it’s a grappling hook game where you are MacGyver, and you don’t have a grappling hook. Tractor Beam rewards thinking over twitching. It is a contemplative, considered play style over a rushed, headstrong one. Points are scored solely for distance traveled, not for speed. This is a test of endurance and wits, not strength and reflexes. Often, the best option is to press nothing at all, to just drift through the emptiness of space reinforced by the lonely, minimalist, procedural beeps of the music. Sometimes it’s all you can do.

Tractor Beam is, at its core, about improvisation and reinterpretation, about using abilities in ways they were never intended to be used until you can’t imagine they were ever built for any other purpose. By reappropriating one of the earliest classical videogames, Manufacturing Content has not just made Tractor Beam instantly recognizable but created a more appropriate, more telling game about iPhone games than they could have ever intended. By asking, “What if you were playing Asteroid but your engines and weapons were down?” they are also asking what all iPhone game developers are constantly asking: “What if you took these tried-and-tested mechanics and game types and deployed them in an entirely different form?”

As you expertly swing from asteroid to asteroid in Tractor Beam and learn to harness a tool intended to attract asteroids in order to avoid them, you find the answer to these questions. iPhone games aren’t something entirely new, but they are something deviant. They take elements of games we are familiar with and flip them all on their heads to create experiences we’ve never had before. Experiences we always assumed we would be repelled by but instead find ourselves strangely attracted to.

Ready to Rage on iOS