I still miss Brian Michael Bendis’ Peter Parker, and I thought I would have a hard time connecting with Miles Morales, the new hero donning the spider-tights. But I love Miles. He’s a great character. Ultimate Spider-Man #7 is an example of how Bendis has been able to sell us on a new character after we grew so attached to Peter (and were so heartbroken by his death).

In the beginning of the issue, Miles is in his bedroom trying to emulate Peter Parker, watching videos of Peter’s fight with Doc Ock. It’s a wonderful homage to the late hero and one that elucidates for readers the depth into which Miles has gotten himself. Peter wasn’t a hero, either, but he learned. Miles feels even farther behind. It’s one thing Bendis has done very well – Peter had time to get into his role. Miles, however, has to work in the shadow Peter left behind, and Bendis has been able to portray this character insecurity brilliantly. 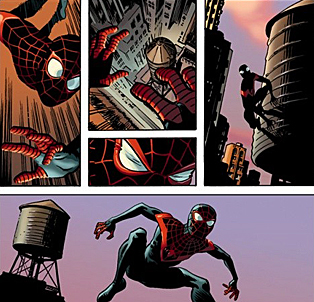 Two concurrent storylines appear in this issue: one following Miles Morales as he fights Omega Red and one following Miles’ uncle, who moonlights as a villain known as the Prowler. Bendis’ dialogue in this issue is top-notch, especially in the interactions between Miles and his parents. Whereas his mother sees Spider-Man as a hero, Miles’ father sees him as a menace and this opens up new doors of conflict for the characters.

Soon, Miles goes out into the city to practice being a hero. Luckily for him, Omega Red is loose and tearing things up. Miles decides this is the perfect time for him to hone his skills. Along with Miles, readers have been figuring out the new Spider-Man’s powers. He can turn invisible, has a super-charged punch that can incapacitate his villains and still has the spider-sense and the ability to stick to surfaces. So when he encounters Omega Red, we get to see just how skilled Miles really is.

When the story switches to the Prowler, the action scene is broken right in half, but the comic never loses its fluidity. After the middle section is resolved, readers transition right back into the fight. This isn’t a grating transition, however, and I think it showcases Bendis’ ability to keep his readers engaged, despite the lack of segue. The final page of the issue is awesome, and I can’t wait to see how it’s resolved It’s a big conflict and it has serious repercussions for all members of Miles’ family.

My only complaint is Chris Samnee’s art. Whereas Sara Pichelli’s art is smooth and polished, Samnee’s looks muddled. It’s not bad art, but it’s a jarring transition from the sleekness we’ve seen before.

This comic is getting consistently better. The father/son dynamic missing in the first series adds a layer of depth that works well in the current one. Bendis operated in the Spider-Man world when Peter was alive, but here he has free rein to create a whole new series of engaging characters. And Miles is fast becoming a hero like Peter.

They’re big shoes to fill, but after reading this issue, I have no doubt Miles can do it. 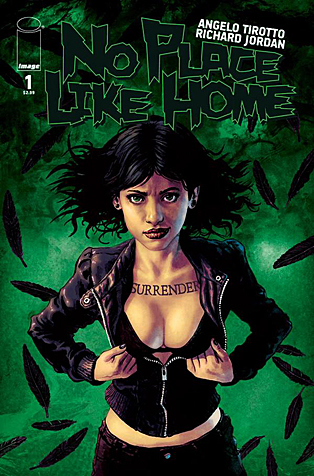 The story seems straightforward: A girl who left home to find fame and fortune in Hollywood returns home after her parents are killed by a tornado. But more appears to be occurring. The town drunk has some poignant but cryptic things to say, and a flock of decapitated ravens is found by the local police. The final page also leaves a lot to be answered.

What I loved most about the comic were the character interactions. The dialogue reads genuinely, and for a word-heavy comic, I enjoyed what was being said. Angelo Tirotto does a great job of capturing honest speech and filling in readers to the history that these characters have with each other. One scene in particular shows all of the characters in a diner. Their conversation covers two pages, but it has enough depth to make me believe that these people have known each other for a very long time. This isn’t easy to do in text and even more difficult to depict in comics, so I applaud Tirotto for his writing abilities.

Richard Jordan’s art reminds me of Darick Robertson’s illustration in Garth Ennis’ The Boys. Several of the characters, like the town drunk, appear gritty and unkempt. This technique is used stylistically to convey emotions and characterization because other characters, like the heroine Dee, are drawn smooth and colored so that their features appear unmarred.

With enough character background and an intriguing story, I won’t have a hard time getting on board with No Place Like Home. I look forward to seeing how the mystery of the ravens is explained and what role the town drunkard plays in all of this. For an introductory issue, Angelo Tirotto and Richard Jordan have done a nice job of giving life to their characters, crafting a unique style for their comic, and writing an engaging tale of loneliness, murder and mystery. 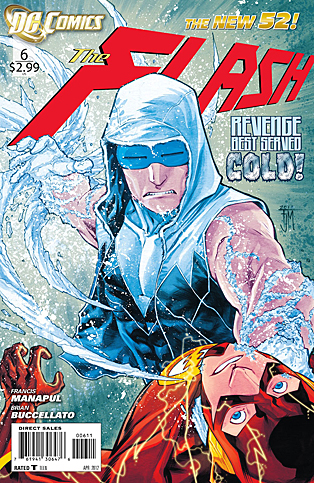 Bannen’s Book of the Week: I found the first art of the new Flash series to be a bit mediocre. The cloning of the villain Mob Rule was one of the weaker stories to appear in The Flash since his rebirth in 2009. This issue was a welcome return to form. With a redesigned Captain Cold, Flash dukes it out with his old rival while trying to avoid becoming a literal time bomb that could destroy existence.

The story jumps around a lot in this issue, but where I derided this in Deadpool #50, the switches in the story flow seamlessly here. Manapul and Buccellato start the story in the present time then jump back to the moments building up to it. This makes for some great character development for Barry and his girlfriend Patty, Flash, Dr. Elias and even Captain Cold. The flashes back and forth between the current action and the past events layer the comic so that its climax leaves several threads still unresolved, but in a way that makes the solution evasive. Basically, I don’t know how Flash will be able to do all the things he needs to do in the next issue.

Francis Manapul’s art is top-notch, and Brian Buccellato’s colors are brilliant. The story opens with the Flash and Captain Cold fighting on the frozen surface of Keystone City’s harbor. Several boats teeter on plateaus of melting ice and this shot is depicted from Flash’s point of view, so readers can see the precariousness of the current situation. I love Manapul’s stylized art. His clean pencils make for some great shots, and his panel constructions play with the setting, particularly on one of the last pages where the panels are depicted as chunks of broken ice.

I don’t particularly dig the redesigned Captain Cold’s costume. The sleeveless shirt makes him look like a wrestler or a snowboarder, and if the character were not written as such a badass, I think this would have come back to bite Manapul in the behind. But because of his tortured position, Cold has added depth. While his justification feels trite, it still gives his actions an edge of determination.

After the previous arc, this is an unexpected and pleasant change. The story has more weight to it than before, and the character development helps create a stronger connection to the people in the issue. And since this is the first of a few character redesigns, I look forward to seeing how the rest work.

No Place Like Home, The Flash, Ultimate Comics Spider-Man