Those of you who know me know about my broomball obsession and may have followed some of my regular smack talk with rival captain and dramaturge, Christopher Diercksen. Christopher presents himself as a nice guy most of the time, but I’m convinced that he’s pure evil, especially on the broomball court. I’m sure he’d do anything to gain an advantage over my team, and I doubt he’d deny it if pressed. 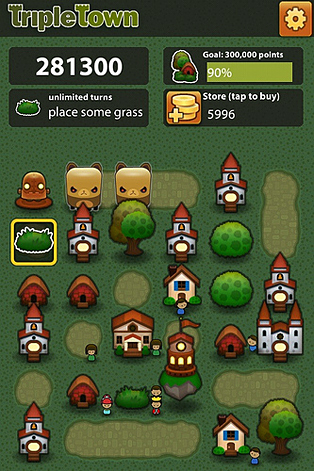 If we’re even going to have a broomball season in 2012, I think Triple Town may have been sent by Christopher to keep me distracted. It might just work.

Triple Town, by Spry Fox, is a straightforward match-three puzzle game. Each set of three tiles you match turns into one more powerful tile, which eventually turns from patches of grass to mansions. The end result is that you are actively engaged in building a city through the puzzle. The game throws bears at you that eventually turn to tombstones, which then turn to churches and cathedrals. To make things more interesting, some bears are so-called “ninja bears,” which randomly hop throughout the board and can only be eliminated by, obviously, robots. The game ends when the entire grid is filled, and on Facebook and Google+, you are building not just one town, but an entire civilization of ursaphobic city-states.

The puzzles are random enough to be challenging, but not frustrating enough to scare anyone away. Much like Bejeweled, Snood and Angry Birds before it, Triple Town has hit on the right balance of difficulty and playability. Since the game offers a limited number of turns, which regenerate over time, it’s perfectly geared for occasional play over the course of a day. Make a few moves, build some cathedrals, sic the robots on those ninja bears, then go back to work, knowing that by the time you can take another break you have enough turns to keep things going.

Of course, it is possible to earn unlimited turns through in-game gold. Gold is earned regularly for reaching certain score points or achievements, but it can also be obtained relatively quickly through in-app purchases. I’ve railed against the “freemium” model before, but in this case I don’t feel that in-app purchases are a requirement to enjoy the game. Having a treasure trove of gold would make the game a lot easier, since you can just purchase the piece that you need to keep going instead of hoping it comes up at random. But while playing the game I never felt once that the whole thing was an obvious cash grab by the developers.

As a free download, it’s pretty much exactly what you could ask for in a game – quick to play, engaging, well drawn and well coded. And I don’t think anyone’s going to look down on you for dropping a few dollars to rack up coins and get a much larger city out of the deal. It’s still nice to know that you don’t have to – that free can actually stay free.

If @UnwinnableDonB doesn’t answer your tweets, it’s because he’s trapping bears to make cathedrals, like in the olden days. Triple Town is available from the Android Market and iTunes, as well as Facebook and Google+. It is a free download/play for all four platforms.