Fresh off my high from Arkham City, I was looking for a comic that would bring me back into the dark universe of the Batman. The Dark Knight #2 is a vast improvement over the first issue. The art is more consistent, the story is linear and the issue focuses solely on Batman. Save for a pretty silly concept, The Dark Knight lives up to its name this week.

The issue starts off where the previous one ended, with a juiced-up Two-Face emerging from a cell. After several painful panels and pages of Bruce getting the crap beat out of him, Two-Face’s eyes start bleeding and he collapses while uttering a strange prophecy: Batman will see a world of people without fear. It seems – and this is the silly part – that someone is injecting the inmates of Arkham with a toxin that causes them to repress their fears, grow to seven feet in height and develop a musculature that rivals Mr. Universe. 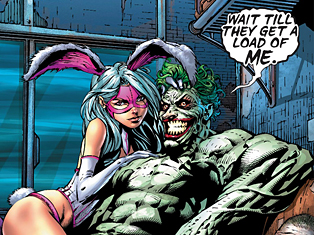 We’re given a montage of Batman’s allies fighting juiced-up villains including The Ventriloquist, Zsasz, the Cavalier and the Clock King. After an intense train chase, the issue ends with Bruce confronting a massive, muscled Joker who, as an homage to Nicholson’s Joker, says, “Wait till they get a load of me!”

First, the positives: Batman is violent and merciless in this issue. David Finch is a stellar Batman artist, and his images resonate with the Arkham City feel. Batman is big and powerful. Each of his punches elicits a free flow of blood that speaks to how painful it must be to get hit by the Bat. Richard Friend’s inks add just the right depth of tone with shadows and darkness, and Alex Sinclair’s colors – vibrant and muted at the appropriate times – make for a visually engaging comic.

Additionally, Jenkins and Finch do a great job of showing exactly how reliant Bruce is on those around him. His conversation with Gordon highlights how much both men need each other. Alfred is a reliable and important player in this issue, as he helps Bruce solve the mysteries behind the drugs infecting the inmates. Lastly, Batman’s interactions with Two-Face show just what lengths he’ll go to get his answers. Basically, he knows Harvey is an addict at this point, and Batman reminds Two-Face that he will eventually want another fix, but he’ll never get his hands on it.

The negatives: the concept of the drug is dumb. An injection that makes you fearless? You could get the same result from booze, and it’d be a lot cheaper. And much of this issue feels like a tie-in to Arkham City, as if Finch and Jenkins are playing up the connections between the two in order to drum up interest in their story. In a sense, it’s a pretty unoriginal piece. Even the train chase scene – which I loved – feels directly pulled from a supplemental activity in Arkham City.

These are minor issues, as much of the comic is pretty damn good and worth the read. I was skeptical after the first issue, but now I’m hooked. I think this is a comic that many Batman fans should read, and one many Batman fans are going to like. 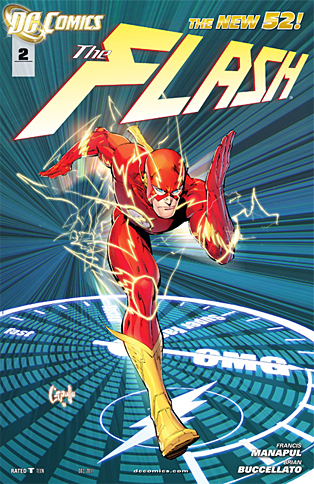 The Flash suffers from a similar issue as The Dark Knight: the concept is cool, but it’s executed a bit too quickly. There’s no attempt to build up Barry’s abilities, and while Manapul’s art is one of the best features of the comic, he doesn’t have the same grand feel that Geoff Johns did when he wrote The Flash. Tonally, the stories feel very different, and in the end, Barry Allen loses some of his wonderment.

Barry has a problem. He’s fast – the fastest man on earth. But he’s not thinking fast enough. So he’s given a task: practice Augmented Cognition. This will give him the ability to focus his thoughts and allow him to process all the information around him simultaneously. Basically, he can see events before they occur and then make sure all of the events play out correctly so that no one is harmed.

I’m not against this idea. It’s not a bad thing for The Flash to have precognition. In fact, I think it will make the character more interesting. Maybe this is a side effect of the Speed Force? Maybe it will make him insane? Who knows? But my problem with this ability is that he’s able to develop it IN A SINGLE PAGE! There’s no effort whatsoever. On page six, he’s told about it. On page seven, he tries it. On page eight, HE HAS IT?!?!

Manapul does something very cool with the art here. Whenever Barry sees things in his AugCog state, they appear as purple-hued pencils. I like Manapul’s art anyway, so this simplistic, stripped-down version is even more visually captivating. A few times in the issue, Manapul eschews the color for muted pencils – sometimes as flashback, and sometimes as AugCog reality – but every time it occurs, the panels appear beautifully crafted.

I still can’t say exactly what this book is about because I’m not sure. Whereas Johns immediately jumped in to a story that eventually led to Flashpoint, Manapul and Buccellato have given readers a side story involving an old friend of Barry’s who seems to have cloned himself. Why? Not sure. Is it important to Barry’s AugCog abilities? Probably, but not sure either.

The rest of the issue is good, and the climax at the end is pretty awesome. But for such a game-changing ability, I thought more service had to be played to the character developing it. It seems lazy on the parts of Manapul and Buccellato. A character should have to struggle to earn something, and in the end, he will/should appreciate it more. I also wonder if it’s going to be a permanent part of Barry’s abilities, or if its only purpose is to serve this arc.

Again, The Flash isn’t a bad read. But its flaws are glaring and distracting. Hopefully, I’m in the minority here, and people can steer me straight because I feel like I’m missing something. And that ain’t a good feeling, folks. 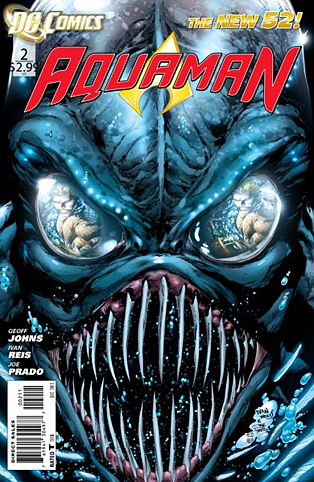 Bannen’s Book of the Week: I should have bought stock in this idea. When Geoff Johns finished Blackest Night, I wrote that he would probably turn his attention to the rest of the Silver Age DCU. He came back with Flash: Rebirth and reworked the origin of Barry Allen to make him a mainstay of the new DC. I told anyone who would listen that I bet Johns would do the same thing to Aquaman. And now I get to say, “I told you so.”

A few months back, Johns was interviewed about his Aquaman comic. He posed a simple question: “When you think of Aquaman, what comes to mind?” The interviewer responded, as most people would, “As the guy who talks to fish.”

What readers get, though, is a tougher version of the Sea King. He’s not ruthless, but he is strong. Readers are reminded, continuously, that Arthur Curry is the King of Atlantis. He’s the DC version of Sub-Mariner, but he’s not cold like Namor. Because his father was from land, Arthur is a man of a two worlds. Similar to Superman, he has a soft spot for the people of Earth and does what he can to protect them.

Do the people need protection? Hell, yea! The villains Johns and Reis create are scary and violent. They look like much more evil versions of the Creature from the Black Lagoon, and their sole drive seems to be for food. They want Arthur to come down to the Marianas Trench. Why? Don’t know. But knowing Johns, it’ll be for a cool reason.

As with all of Johns’ stories, this one is well constructed – split evenly between developing Arthur and Mera’s relationship and showing the badassery of Aquaman. With Ivan Reis’ confident pen, Aquaman appears as a regal and imposing figure. And the fight scenes have a gorgeous, if unsettling, texture to them.

With a story that clips along at a pretty rapid pace, Aquaman is a quick read. The character, however, has never seemed more alive. I hearken back to the years when Aquaman had a beard and a hook for a hand (which was later replaced by a water-like appendage that could be manipulated). He always seemed silly.

Now, he’s more interesting. He has Batman’s intimidation and Green Lantern’s confidence, but there’s something more subdued about Arthur Curry. Johns has captured a perfect balance between the Sea King and the little boy who wasn’t allowed near the ocean. He seems like a man torn in two, but one with the humility that allows him the ability to take people’s abuse. It’s like Johns is writing an Aquaman who knows most of the comic world thinks he’s a joke. He seems hurt by it.

But he also seems determined to prove readers wrong. I’m a Johns fanboy, but I also recognize when his efforts work (Blackest Night) or fail (Flashpoint). This issue has the same exuberant feel that Green Lantern had when it was reintroduced, but Aquaman seems like a blank canvas –he’s a character about whom most people know nothing. As a writer, this must be very exciting. As a reader, it’s an introduction to a whole new world. And so far, I’m loving it.

The Choice Is Theirs: X-Men Destiny