The first time I saw The Exorcist, I was 10 years old. It was on basic cable, so most of the more graphic bits and cursing were edited down. However, the makeup, voice effects and pea soup were intact. The central idea of an outside force possessing someone and subjugating his or her will completely is a potent kind of terror – especially to a 10-year-old that’s enrolled in Catholic school.

I was raised in a pretty strict Roman Catholic home – so Catholic that my godfather is a priest. Father Yeo was my mother’s teacher. He helped her through some tough times in high school. He also put together musicals and plays in the church hall, and both of my parents worked with him on those shows for years (possibly decades, given the tapes and CDs Father Yeo’s sister recently gave me). Over the years, Father Yeo and my mom became very close friends. So when I was born, he was a natural choice for godfather. 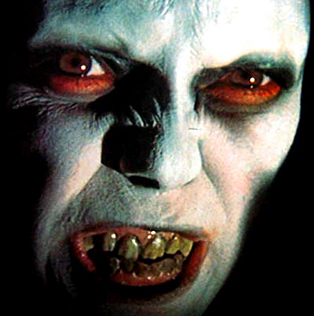 Father Yeo was trained as a Roman Catholic priest in the 1950s, before the Second Vatican Council. Opened by Pope John XXIII, the Second Vatican Council addressed the Roman Catholic Church’s relation to the modern world. Before Vatican II, all secular priests were instructed in the Rite of Exorcism. Therefore, Fr. Yeo knew the rite (though he never performed it). Since the movie bothered me, he was the natural person to call.

Lucky for me, it was around Christmas time and we were due to visit Father at his parish in Scotch Plains, New Jersey. I asked him about possession and if what happened in the movie was possible. Mind you, I spent more than a few nights hearing the heater go off, expecting to see Captain Howdy in the corner of my bedroom. Father Yeo explained that Max von Sydow’s Father Merrin was, more or less, performing the rite he was taught, but that the film, like Star Wars, was a work of fiction. He told me not to worry about it and that I had more important things to worry about than demonic possession – namely, the opening of my Christmas presents.

A few years ago, Fr. Yeo was diagnosed with Alzheimer’s disease. According to the National Center for Biotechnology Information, “Alzheimer’s disease is characterized by degenerative changes in a variety of neurotransmitter systems.” That’s a clinical way of saying that Alzheimer’s takes its victim’s mind away.

A lover of the arts, Father Yeo knew so much about film, theater, painting and even magic. To realize that he would forget how to do his favorite magic trick (sticking a cigarette through his ear and out his nose) or that he’d forget his duties as a priest had to be terrifying, but you’d never know it. He took the news with ease in much the same way he did when he had a heart attack. It was happening and it was out of his control. All he could do was pray and let what would happen do just that – happen.

When I was about 20, a good friend of mine from high school was on summer break from college. We met up at a diner and he brought his cousin along. In the interest of privacy, we’ll call the cousin Jack. Jack was recovering from substance abuse and he’d been getting his life in order. He’d been working in the cafeteria at a local hospital for a few months and he really enjoyed it, especially his talks with the chaplain.

Father Yeo had gone on to hospital chaplain work after he had triple bypass surgery. Years of smoking cigarettes and eating bologna sandwiches had taken their toll on him, so he thought it best to retire from the parish life and get on with the business of helping sick people. He enjoyed it quite a bit. He was able to bring comfort to people and console their loved ones every day, and he had a nice living space on the premises.

According to Jack, Father (in a weak moment all smokers are far too familiar with) bummed a cigarette off him one day and the two began chatting. Jack said Father Yeo was really easy to talk to – not like any priest he’d ever known growing up. Their talk quickly became a daily ritual. Father would come down to the cafeteria, get his lunch, then he or Jack would say, “OK, it’s time for confession.” Jack said he was really helpful, not because of any sermon or great spiritual revelation – Father Yeo was a good listener and he listened to Jack’s story about recovery, and they bonded over their mutual addiction to a stupid little stick of tobacco.

That’s the thing; Fr. Yeo was always a thoughtful and compassionate man. 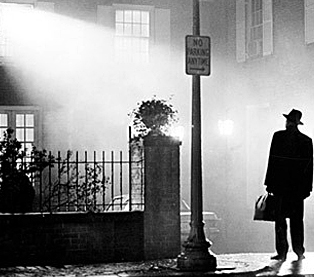 Here was a man who was so sure of himself and so giving, slowly slipping into a place where he could no longer prepare a meal or remember telling a 10-year-old kid to forget about a movie. I thought back to The Exorcist and thought of this disease, systematically attacking all that he is – robbing him of his memories, his ability to listen, his bodily functions – everything. As silly as it sounds, I think back to that movie, where a possessed Regan MacNeil flung herself off the bed, spit pea soup and spouted profane blasphemy. The character was no longer in control of who she was. She wasn’t the innocent kid we saw at the beginning of the film – she was subjugated by pure evil and had no control.

I saw Father last week. He’s living in an assisted-care facility. He has a private and spacious room with a TV, a dresser, a mini fridge and a private bathroom. The staff is excellent. They genuinely care about the patients’ well-being and keep an eye out without being intrusive. He recognized my mother and me, but he had a little trouble recalling my father. To alleviate the mood in the room, he looked over to an oil painting that his friend, Victor, had made for him, pointed to it and asked, “Who’s that?” He grinned as we looked back at him. Then he stood up and asked if we wanted to take a walk.

Father had such a keen mind and now it’s slipping away. It seems like he’s no longer who he was. It’s not right – it isn’t fair. Then I remember it wasn’t his production of Oliver that defined him, nor was it the recreation center he built while serving as a parish pastor. I think back to that man who told me not to worry about evil spirits from another realm and to focus on the here and now – to enjoy what’s good.

Thankfully, Father Yeo has not suffered from some of Alzheimer’s more insidious side effects like mood swings, violent outbursts and withdrawal from his surroundings. While Father may never stick that cigarette in his ear and pull it out of his nose again, he still has the one thing that makes him uniquely himself – his compassion.

The Devil and the D20

The IGF is Just Fine – You’re the Problem