I caught a glimpse of myself in the mirror and something was different. Perhaps it was the late hour, or the bourbon, or the harsh lighting, but there seemed to be a gauntness in my cheeks that I did not recall. The change was infinitesimal – no one but me could possibly notice – but I could see it.

I can deal with the idea of being eaten by a demon zombie because that means I have 21 grams of soul that can’t be digested.

There, now, among the grey hairs of my beard and the nearly invisible web of lines gathering near the corners of my eyes was another indelible mark of aging. In that slightness, I saw a hint of the future, of a taut, scowling mouth, of skin turned leathery. It made me feel weary.

It made me feel old.

There are really only two kinds of horror story – the natural and the supernatural.

The first type has a person, or some kind of natural agency, as the villain. I think Psycho or Texas Chainsaw Massacre are the best examples of this, as they clearly involve people doing terrible things to other people, but natural horror can also be fantastic. Frankenstein resides here, with its monster created by science gone wild, as does John Carpenter’s The Thing – the shape-shifting creature may not be of this earth, but neither is it from outside of our accepted reality. It is alien and unpleasant, to be sure, but not unnatural.

Supernatural horror, of course, revolves around those things which stand apart from human understanding. This is the realm of dark magic, demons and ghosts. In life, Dracula studied at the Scholomance, a school of black magic from Carpathian legend. Freddy Krueger stalked his victims from dreams. Pazuzu, a Babylonian famine spirit, inhabited the body of a young girl to commit murder. Stories like these defy our basic expectations of the world.

I have always preferred the supernatural stories. Their authors may have intended their monsters to be all the scarier for their strange powers and outré origins, but to me, they are comforting. 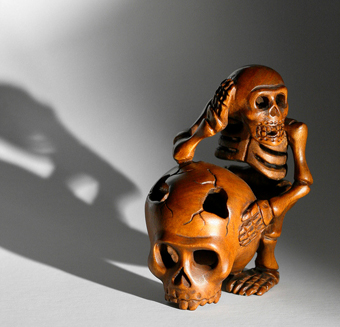 My dad died of cancer at 58. His father died of cancer at 68. On its own, my family health history doesn’t exactly inspire much confidence for a long and storied life, but as a confirmed agnostic, things can get downright bleak now and then.

So I have sat in a church at night recording the silence, in the hopes of hearing whispers in the static hiss. I’ve gathered around an Ouija board with friends, hoping to see the planchette jerk into motion. And I embrace stories about things from the outer darkness wreaking havoc on mortal lives.

Imagine, for a moment, the zombie apocalypse. Not the one from The Walking Dead, but one that started in the apartment building of [REC]. Those zombies aren’t the product of some strange new disease; they are created by a spiritual infection. They’re powered by evil entities.

A single supernatural occurrence, no matter how horrific, at least implies the possibility that thousands of years of human superstition are rooted in something real. In a Romero movie, eaten is eaten. There is no hope of anything else. I can deal with the idea of being eaten by a demon zombie, though, because that means I have 21 grams of soul that can’t be digested.

With every new grey hair and every wrinkle, I come to terms with the idea that one day I will die, but I will never really believe that is the end of things, no matter what the evidence. So I will continue to look for ghosts and play with Ouija boards and read stories about monsters from beyond.

They give me a naïve kind of hope, because the darkness is scarier with nothing in it.

Stu Horvath is going to spend his weekend building a working proton pack. You know, just in case. Follow his progress on Twitter @StuHorvath. He took the photos, too. Next week’s Burnt Offering expands on this week’s ideas with a look at some supernatural horror that isn’t comforting at all.

How the Indie Half Lives

Dorks on a Plane