One of my first experiences with the idea of role-playing games was the 1982 movie, Mazes and Monsters. The film was loosely based on the real-life case of James Dallas Egbert III where, supposedly, a mentally unstable young man who was playing a live-action game of D&D went missing and was believed to have committed suicide in the steam tunnels beneath Michigan State University. That was a false hypothesis put forth by the private detective that Egbert’s parents hired. It was parroted by the local media, thereby lending it credence. Egbert was actually hiding out at a friend’s house the entire time, and while he had played D&D in the past, it wasn’t the reason he went missing. 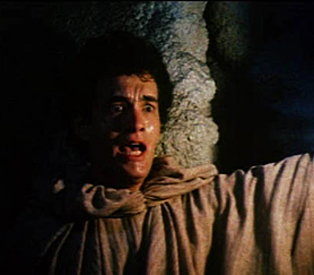 Mazes and Monsters, on the other hand, features a young Tom Hanks (in one of his first roles) as Robbie Wheeling, an already mentally unstable young man who becomes so obsessed with role-playing games that he starts believing that he has become his character, a cleric named Pardeux. Robbie and his friends find a cave and start to live-play their fantasy game, which proves to be the trigger that really pushes Robbie into madness. Robbie then travels around the city and the subway system seeing visions of monsters and dragons. In one of the most memorable scenes, Robbie confronts a subway conductor and asks him if he can see the man’s dragon – which is really just a subway car. Robbie’s ultimate goal is to ascend to the top of the Twin Towers, cast a spell and then leap off so that he can enter a sacred location called the Great Hall. His friends are able to stop him, but Robbie’s experiments with role-playing have driven him inexorably mad. So right from the start, D&D was getting a bad rep in the media.

While I’m sure the intended effect of Mazes and Monsters was to warn kids about delving into a fantasy world, it just made me want to play D&D even more. I mean, imagine a game that’s so immersive you can actually almost become your character!

Even though it was proven that the Egbert case had nothing to do with D&D, the game could not escape negative press. Around the same time in 1980s America, there was something called the “Satanic Panic” that was sweeping across suburban towns. It began when parents started complaining that their children were being abused in the daycare centers they were sending them to. When the children were questioned, the scenarios they painted were stranger than anything anyone had expected. The kids wove tales of flying witches, cults that dropped babies out of hot air balloons and satanic rituals that involved rape and murder.

Therapists used hypnotic regression to dredge up these fantastic hidden memories of satanic abuse. It was all bunk, however. No actual forensic evidence was ever found that indicated satanic abuse was going on anywhere across the whole country. It was more likely the fault of the adults’ overactive imaginations and coercive questioning.

During the Panic, many new forms of music and entertainment were becoming available and were also being labeled as satanic. Dungeons & Dragons was one of them. 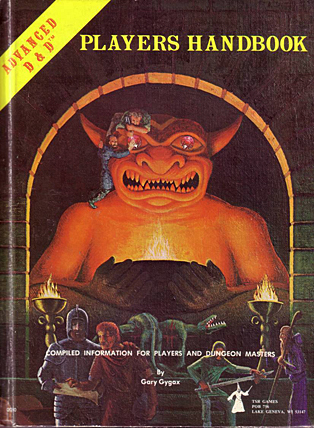 In those days, pretty much everything was thought to be subversive and satanic, including a game where a bunch of kids congregated in a basement and played make-believe warriors over a pizza pie. It was mainly Christian groups that did the complaining, and really, taking a look through those early D&D books and seeing page after page of alchemical formulae (THAC0 charts) and black-and-white line art of demons, devils and scantily-clad ladies, I’m not sure that I can blame anyone for prejudging the game.

There’s a great comic that depicts the “satanic” view of Dungeons & Dragons written and drawn by the legendary Jack T. Chick. As anyone who’s ever played D&D can attest, Chick’s version is pretty spot-on, though you can tell that he never actually played D&D because almost half of those players are women. If you don’t know Jack Chick, you should do some Googling – no one produces wacko Christian comics like this man.

As you can see in Chick’s comic, D&D was viewed as a sort of mystical training ground for occult secret societies. The rationale seems to travel along the lines that the mind is so fragile that playing a game fueled by pure imagination can lead you to thinking you can really cast spells and summon demons. If only that were true – I’ve been looking for a way to break into the Illuminati and after all these years of playing D&D, I’m still no closer to mystical world domination.

The dungeon master was seen as a high priest of sorts, and the actual game was considered a primer for rituals and black masses. A self-proclaimed sorcerer-turned-Christian, William Schnoebelen wrote an article entitled “Straight Talk on Dungeons and Dragons.” According to Schnoebelen, “[M]ale characters in the game often try to seduce female characters; and references abound to things like venereal disease and satyriasis (a male condition of permanent sexual arousal). Can these sorts of things be appropriate for Christians or even for any decent person of whatever faith?”

Christian groups believed that D&D taught you how to rise in the ranks of mysticism and how to best venerate Satan; in fact, an anti-occult activist group even brought TSR, the company that once published D&D, to court. They alleged that the game is a danger and causes kids to commit suicide. The case was thrown out of court, because there is not one single shred of evidence to show that D&D or any kind of fantasy role-playing is harmful. In fact, Sci-Fi/Fantasy author Michael Stackpole presented evidence during the trial showing that gamers actually have a much lower suicide rate than non-gamers. Even though they won the suit, TSR decided to remove many of the references to demons and devils from the various 2nd Edition sourcebooks and added “for mature audiences” labels on later editions.

Playing Dungeons & Dragons is not going to forever mar your immortal soul. You’re not going to gain access and insight to dark spiritual powers by playing, though you may learn something about communication, teamwork and the benefits of logical thinking. So go ahead and play to your heart’s content. No one is going to try to recruit you into an underground cult, then force you to commit suicide by killing your character and making you leave the house and go home – though you’d be pretty cool if you did have as awesome a character name as Elfstar the cleric or Black Leaf the thief.