I grew up going to Catholic school and attending a Catholic church. Obviously, I got bombarded by a lot of Satan talk, but I was never able to take any of it seriously. I mean, the idea that there is an actual place like hell, where people are being boiled in pots of oil and skewered on pitchforks for eternity? That’s so much effort. How do the demons sustain their enthusiasm to torture for all time? Do they get dental insurance? And Satan himself always came across as more needy than terrifying. Oh, I need your soul. Reject God and be my BFF. Even as a child, I remember thinking, well, this is a bunch of bullshit (I always cursed in my mind as a child because my mother has a potty mouth).

Regardless, in honor of Unwinnable’s Satan week, I thought I would comb through the memories of my personal, favorite depictions of Satan in film. I studied film in college, which means I wasted tens of thousands of federal loan dollars while I watched a bunch of movies. Now I’m a lawyer. Stay in school, kids! Please note that these are simply the five depictions of Satan that I, personally, enjoyed the most. You may disagree, because you are almost certainly a different person with different thoughts and feelings. You may even have your own list of favorite depictions of Satan in movies. I encourage you to write your list down on a piece of paper, and then take that paper and place it in an ash tray and set it ablaze, pretending all the while that you are watching the flickering flames of hell. 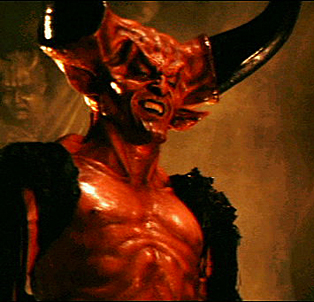 The Last Temptation of Christ (1988) – This was a highly controversial film because it showed Jesus being tempted by Satan, and when given the choice between dying on the cross and having a normal life with a wife and children…he chose to die on the cross! Hey now! No, sorry, I think that was an episode of Everybody Loves Raymond. Here, Jesus is portrayed as a not-crazy-person and chooses to get his baby-making on, rather than be tortured to death. What I always liked about this movie was Satan’s use of rationalization, calmly appealing to what Jesus already wants, rather than garish attempts to overtly seduce. This is a toned-down Satan, comfortable in his own skin. Well, not technically his own skin. Satan appears in different forms: as a child when Jesus is on the cross and as a lion and a snake while Jesus is tripping his balls off in the desert. I think he is supposed to be at Burning Man. Interesting bit of film trivia: David Bowie plays himself as Pontius Pilate, because David Bowie has always existed on Earth and was literally the original Pontius Pilate. He also served as technical advisor on the film.

Legend (1985) – I would be remiss if I failed to mention Tim Curry in Legend. Technically, he is not called Satan. But let’s face it, if the Satan of medieval folklore came to life and was a sweet transvestite from Transylvania, this is what he would look like. Curry plays the Lord of Darkness, who wants to rid the world of sunlight. He needs to kill some unicorns and also wants to steal a twink Tom Cruise’s woman. The filmmakers probably avoided calling him Satan because Christians would think a movie where unicorns exist is completely ridiculous! Curry went through 45 minutes of makeup a day for this role. Yeah, that’s all. They just sprayed him red. Little did people realize at the time, but those giant horns are actually on Tim Curry’s head. That’s why Clue was the most expensive movie ever made ($800 million), because of all the digital effects needed to remove Curry’s obscenely large horns from every shot. Why else would a movie have three separate endings in theaters to try and force people to attend multiple screenings? You’d have to be evil to pull that shit without good reason. 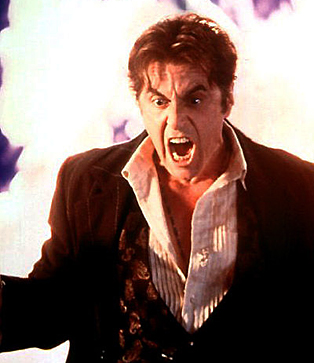 The Devil’s Advocate (1997) – The pitch for this movie was simple: Some jerk walked into a producer’s office and said, “Satan Lawyer!” That producer was a total ding-dong and said, “I love it!” Al Pacino signed on because the role called for equal parts yelling and lip-licking. Keanu Reeves wandered onto the set one day in a suit. The rest is history. Satan is a highly successful attorney named John Milton, proving that Satan is as clever as anyone who has ever taken English in high school. Fine, I’ll spare you the Google search – John Milton wrote Paradise Lost. Get it? C’mon, read a book! Pacino Whoo-Haas his way through this campy and entertaining (?) portrayal of Satan in a way that makes the ruler of hell seem like a giant douchebag. Hey Satan, you’re going to leave your shirt unbuttoned all the way down to your belly? And now you’re just gonna throw a scarf over that look? Ugh. The only thing worse would be if you wore the same vest I wore to prom. Oh, there it is! Actually, the scariest part of this movie is that Keanu’s character is named Kevin. God forbid Satan ever comes to our mortal plane and the only person standing in his way is named Kevin. We are all fucked.

Rosemary’s Baby (1968) – We only get to see Satan’s beautiful, hairy eyes in this movie. If it were me, I might get my eyebrows waxed a little if I only had one shot with a woman every millennia, but what do I know. I also rarely resort to roofies to get laid. What?!? Nothing. Anyway, what always creeped me out about this movie is the idea that nice, old, weird people will eventually get you literally fucked by Satan. I grew up in a large family, so I was constantly surrounded by nice, old, weird people. Luckily, I didn’t have Mia Farrow’s child-bearing hips, so I knew I was safe. Seriously, Satan? You want to bring your horrible monster baby into the world so you choose a blond Olive Oyl? Most 8-year-olds weigh more than Mia Farrow did in this movie. The film also instilled in me a natural aversion to those who are well-traveled. The nice, old, weird neighbor in this movie (Sidney Blackmer) has a great scene early on, when getting to know the doomed young lovers, saying, “I’ve been everywhere. You name a place and I’ve been there. Go ahead, name a place.” John Cassavetes says, “Fairbanks, Alaska,” and the old man immediately says, “I’ve been there!” He turns out to be the leader of a Satanic coven. Well, I’ve spent 95% of my life in Hudson County, New Jersey, and I’ve only met a handful of Satan’s minions. I’ll continue to be a homebody, thank you very much, and I think it’s entirely appropriate to regard the Travel Channel with uneasy suspicion.

Cabin in the Sky (1943) – This is my favorite movie depicting God and the Devil. It’s a musical made with an all-black cast, which was a big deal at the time. The film was also the directorial debut of Vincente Minnelli, who never went on to do anything else of any significance. Eddie Anderson’s character is shot to death while gambling, but thanks to the vigilant prayers of his wife, he is granted a reprieve to prove he shouldn’t be sent to hell. Rex Ingram steals the show as Lucifer Jr., who is determined to capture Anderson’s soul by tempting him with the advances of a young Lena Horne. If you have not seen this movie, do yourself a favor and check it out. It is extremely fun, it is full of some of the great character actors of the era and the costumes are dope as shit. The outfits worn by good and evil – the angels in immaculate marching band uniforms and Satan and his minions looking like spiffy soldiers in an army of doormen – make this eternal battle seem innocent and lighthearted. Just like real life! Plus, Ingram’s hair is awesome, with little spikes of hair in place of horns. This movie portrays a Satan I could hang with. And when you get right down to it, isn’t that what we’re all searching for in the embodiment of evil?