My only real experience with the character of Deadpool is through Rick Remender’s Uncanny X-Force. In that series, Deadpool is limited to a few quips, and he doesn’t serve a major role in the story. He does provide serious muscle and comic relief.

I also know that Deadpool can’t die. This factor has come up a few times in Uncanny X-Force, so when I saw that Deadpool would be facing death in his own series, I wanted to find out how. The comic I read, however, lacks coherence and clarity, and it only showed me why I’m glad I haven’t read an issue of Deadpool before and why I won’t again. 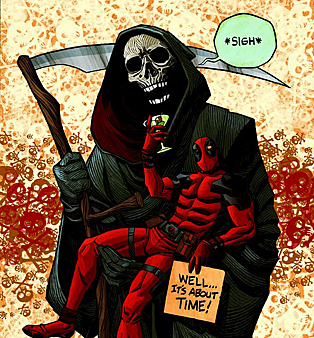 The basic premise of Deadpool #50 is that Wade found out he can die. When his clone, Evil Deadpool, was shot and killed with a dart that negated his healing power, Wade realized that now he, too, can die. His task becomes finding out who killed his evil clone and how he can have the same person assassinate him. Using his X-Force allies as pawns, he gets them to believe that the Kingpin had something to do with his attempted assassination. Wade gets Bob, an agent of Hydra, to go and seek out Wilson Fisk to get help in killing Deadpool. Since Fisk has nothing to do with the serum, he gets Typhoid Mary to pull the Hand together and go after X-Force.

Earlier in the comic, a man breaks into a storage unit and finds a baby book, which he sends off to a mysterious connection. The book, it turns out, has something important hidden inside – something that can kill Deadpool. The final page of the issue shows readers what was hidden and who’s behind trying to kill Wade.

Maybe if I were more indoctrinated into the world of Deadpool, I wouldn’t have had such a problem following the story. Apart from the corny jokes, the lack of structure in the comic made it a difficult read. It starts “Five Months Ago,” then jumps to “Four Days Ago,” then the present, then just a page later it jumps back “Two Days Ago.” Time can be manipulated in any comic, but the extent to which time becomes loose made following the major thread of the story an arduous task.

Additionally, the narrative voices in Wade’s head make for a painful read. His thoughts respond to his words, which respond to the thoughts of his thoughts. Throw in some sex jokes about Psylocke’s underwear, and you have the basic level of discourse that occurs in the comic.

I also couldn’t get used to Carlo Barberi’s art. Whereas Jerome Opeña draws characters like Wolverine and Fantomex in tight pencils, Barberi depicts them as blocky and shoulder-heavy, misshapen to the point of distraction. Plus, Typhoid Mary struts around in a costume that would embarrass Satan himself, and I really didn’t see the need for it.

All of this coupled together made Deadpool a disappointing read. I get that the comic is an acquired taste – many people love Deadpool just the way he’s written. But after reading Remender’s variation on the character, I don’t see how other writers can’t have similar incarnations of the “Merc with a Mouth.” I’m interested to see if Deadpool really can die, but not at the expense of the writing and art.

I’ll pass and pick up Uncanny X-Force instead. 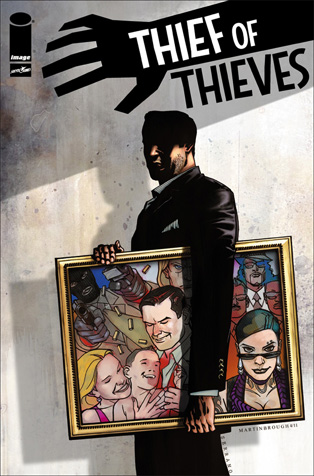 Robert Kirkman and Nick Spencer are hotter than bubblegum right now. Kirkman, with his Walking Dead series on AMC, and Spencer, with his wonderfully-crafted Morning Glories, both have a lot to offer the writing and comic world. One would think that a pairing of these two would make for an earth-shattering, watershed moment in comics history. Well, it doesn’t. Thief of Thieves, while entertaining, feels bland and uninspired. It’s like every other good thief story and adds nothing new to the genre (if such a genre exists). Thief of Thieves feels too contrived, and its lack of originality makes it just one more book that will hit the shelves every month.

Redmond is a thief, but it appears that he’s the best there is. The issue opens with him being caught while trying to steal something important on a cruise ship. After he surrenders, he’s threatened with torture at the hands of the woman from whom he stole. Due to U.S. law, she can’t torture him on her ship, so she kidnaps him. It turns out that she’s one of his crew, and in a Mission: Impossible-style theft, several people were in on the robbery. What follows is a brief history of how Redmond met Celia, his partner in crime (so to speak). Catching her trying to steal his car, Redmond educates Celia in the art of car theft. He agrees to take her under his wing and teach her how to be the best thief. The last pages of the issue show us Redmond being toasted by his boss for yet another successful robbery. But on the last page, Redmond says, “I quit.”

There’s not enough depth here to really understand the tag line on the cover: “There is nothing he can’t steal, nothing he can’t have… except for the life he left behind.” At the end of the issue, all we know is that Redmond is a great thief, yet he’s quitting. The most interesting part of the book is the robbery on the cruise ship, but that gets resolved in three pages. And the second act of the book, about Celia and Redmond’s history, is too clichéd to feel authentic. The dialogue – while an interesting breakdown of stealing cars – lacks genuineness. It’s too clean and slick and cool. It’s meant to be character development between the two, but I would have preferred a more realistic connection. When Batman caught Jason Todd trying to steal the Batmobile’s tires – that felt authentic. This is too Hollywood, and coming from Nick Spencer, it feels a bit cheap.

The lack of character development hurts the final pages, too. I get that Redmond and Celia have a connection, but the odd shift to a surprise party for the thief and his agonizing decision to quit aren’t properly set up. The vagueness is intentional, but there’s a lot of nebulousness prior to this moment so that it doesn’t feel right. I’m more confused than anything else, and given the fact that I feel I’ve read this story before, I have little desire to see where it goes from here.

Still, I have faith in Nick Spencer. Morning Glories is on my pull list every month, and I love diving into the cryptic world of Morning Glory Academy. Kirkman, however, has lost a bit of his spark. Haunt is too trite compared to The Walking Dead. This first issue of Thief also lacks the engagement of the Dead book.

It’s only issue #1, but it still should put its best foot forward for the series. Unfortunately, it doesn’t.

Bannen’s Book of the Week: I’ve really enjoyed Tomasi’s run on Batman and Robin, and this issue is another example why. Things between Damian and Bruce have been building to a point where it looks like Damian is going to go rogue and start killing people. It seems inevitable that his programming at the hand of the League of Assassins would override the work by his father, and that breaking point feels at hand. Last issue, Damian joined forces with the villain “Nobody,” an assassin who turns out to be Bruce’s old friend, Morgan. The story of their fallout is explained in this issue, and the final two pages have me very excited for the conclusion of this arc.

In the last issue, Damian had a gun to the head of a human trafficker. Morgan was urging him on, telling him to pull the trigger and shoot. The resolution for that isn’t very satisfying until the final pages, but the explanation is too good to ruin here, so I’ll skip to the main part of the story. When Morgan and Bruce were younger, they trained with each other at the hand of Henri Ducard, Morgan’s father. As Ducard tracks down his target, Bruce and Morgan learn and help each other. What Bruce finds out, however, is that Henri Ducard never wanted to turn his target over to INTERPOL. He intended, from the beginning, to assassinate him. Bruce and Morgan’s falling out because of this is bloody and brutal and fantastic to read. This is the story of how Bruce once came close to killing someone, and it has serious ramifications on his relationship with Damian. When Bruce finally discovers where Damian is and speeds off to get him, Patrick Gleason draws a panel that shows only the profile of Bruce’s face, and focuses particularly on his gritted teeth.

The emotion of this piece makes it such a good sell. The cover is a bit misleading, as the showdown between Batman and Robin has yet to occur. But it is building. Plus, as much as Bruce and Damian lack a strong father-son relationship, Tomasi does a fine job of depicting their emotional connection to each other. For Damian, it’s more loyalty, but for Bruce it’s definitely love.

The brutality of the issue is also brilliantly depicted. Drawn in reds and blacks, Bruce’s fight with Morgan is scary and awesome. I don’t want to give too much away, but I will say that Bruce eventually returns Morgan to his father – through a skylight.

Batman and Robin is one of the best books on the market and an example of a title that is definitely in the first tier of DC’s New 52. I can’t wait to see the final fight in the next issue, as it’s going to be emotionally charged and, in all likelihood, very bloody.

Turn On the Dark, Already!