When we think of superheroes on stage these days, the horrible truth is that we’re likely to picture Spider-Man flying through (falling from?) the air before anything else. Julie Taymor isn’t to blame for this, at least not directly. She has merely followed in the footsteps of the most successful superhero filmmakers who, for the last decade, have made films that are too serious and too intensely immersive to be anything but emotional rides of wonderment and despair. 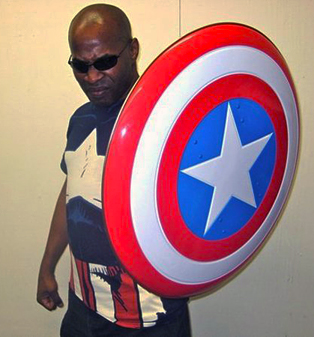 Maybe it holds true that we go to the movies for that kind of escape, especially nowadays. And I can’t deny my own enjoyment of Christopher Nolan’s work, among some others I could lump in with him. The general feeling toward Taymor’s effort in critical circles has been negative, though. So, if theatergoers and theater critics seem less interested in the kind of world-building, disbelief-suspending superhero experience we get on film, what are they looking for? Do they even know?

In Philadelphia, a 100-year-old organization, the Plays and Players theater company, has transformed itself for a new century with an influx of young talent and visionary direction. Central to its transformation is the theater’s new artistic director, Daniel Student, whose Superheroes Who Are Super! tackles the problem of heroes on stage with grace and humor.

I caught up with Mr. Student at a performance of Superheroes in Brooklyn last fall. Wild of hair and beard, Student looks more folk troubadour than theater elite. That is, until you see the theater he creates, which is as conscious of the true nature of superhero stories, and theater in general, as any I’ve yet seen. Because superheroes are folk legends told in folk formats through contemporary media, and Superheroes Who Are Super! is nothing if not a faithful romp through the language of that folk tradition.

The performance at the Brooklyn Lyceum was the last of the day, the adult performance, if you will, as the earlier shows were more of an all-ages crowd with lots of children there to see superheroes. The difference between the two performances, according to Student, is language. “It’s the same,” he said to a passing and curious woman, “The same performance as before, just with more penis jokes.”

At the roots of so many classic comic series is a vernacular long since extinct. It is the language of the ’50s and ’60s media, exacerbated by camp and honed on the rough whetstone of old-school machismo. Superheroes captures this not by attempting to recreate or adapt original comics for the stage, but by performing staged readings of the works word-for-word. With each performance the company selects a different classic comic and a set of new actors, with a few steadfast players returning to take on new roles.

With a line of actors – scripts poised on music stands before them – each performing several characters and executing costume changes and prop acquisitions for all to see (the props and costumes consist of anything from Silly String, to googly eyes, to miniature dinosaurs), there is no opportunity for the audience to suspend its disbelief à la Taymor or Nolan. And for an art form that tends to greatly overcharge audiences for its ludicrously expensive productions, Superheroes offers a dreamy respite, something Student is particularly conscious of as the director of several different projects through the theater.

“Here I am on one end spending thousands of dollars directing six plays a year, putting in six weeks of rehearsals, and I do this other thing that takes three rehearsals, 50 bucks on props and five volunteer actors and it’s more popular than anything I’ve done in my life,” said Student that evening. 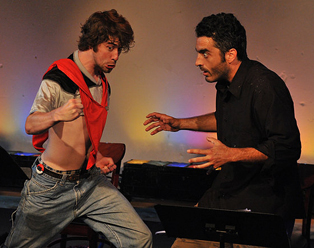 Now, a few reminders that we are, in fact, watching actors performing on stage does not create an alienation effect in the Brechtian sense. Bertolt Brecht’s epic theater utilized the alienation effect to force viewers to encounter the content of a play from a modernist, analytical angle. And despite the fact that analytical modernism has gone the way of the mammoths, young theater still seems to be mired in experiments of direct symbolism and simple alienation. It’s gotten to the point where a circle of actors warming up on stage, out of character and for all the audience to see, has become part of the illusion. It’s no longer even remotely alienating.

So when Superheroes takes attempts at alienation and makes what is often hilarious, hyperbolic light of them and compounds that with the jolting, snappy dialogue of the old comics, we as viewers find ourselves entering a state of suspended alienation. Here, we are free to leave behind our logical minds and revel in accent play, sight gags and slapstick in a way not seen since the heyday of vaudeville.

On its surface, especially if improperly described, Superheroes sounds like little more than a cheaply produced, canned reading of some old kids’ books. But when you experience it, watching Superheroes Who Are Super! is like joining Bertolt Brecht reading comics on acid in a room full of friends. And everyone is in it together.

“I think a big part of why I do this is that, while there have been some good movies lately, with the whole commercialization of the Spider-Man musical, and especially the DC movies, which are just a pile of shit, we can step in and take back the imagination you had as kids. When you pictured Wolverine, you didn’t picture Hugh Jackman running around screaming, you pictured yourself in a Wolverine costume. And that’s really what comics are all about.”

Daniel Imperiale soars through the air on wires on Twitter @DPIWins. Don’t miss Superheroes Who Are Super at the Plays and Players Theater. This weekend’s performance is Black Panther #18, “Bride of the Panther, Part 5: Here Come a Storm.” Check out SaveTheDayProductions.org for more information.

Superheroes Who Are Super!