If you haven’t watched the trailer for the upcoming Ghost Rider: Spirit of Vengeance, then do yourself a favor and check it out. Not only does it feature Nicholas Cage in crazy mode (as opposed to his more typical “jobbing mode”), but it also shows a CG Ghost Rider pissing fire after being asked by a kid if he can do so. It’s from the guys who brought us the Crank movies (where Jason Statham has sex to survive), so I’m sure that ridiculousness is only the tip of the iceberg.

Between the new movie, playing as Ghost Rider in Ultimate Marvel vs. Capcom 3 and a recent legal case between Marvel and Ghost Rider co-creator Gary Friedrich over rights to the character (where unfortunately and typically the creator loses again), the flame head’s been on my mind lately. What is the essence of the Spirit of Vengeance, or does he even have one? Is he just a cool design that looks good on decals and T-shirts or an important character that’s been slumming since the early ’90s? 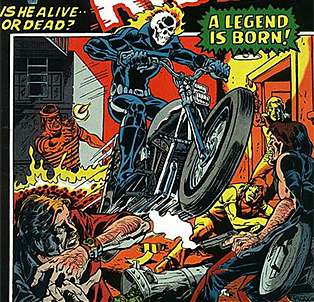 It’s hard to say when I first became aware of Ghost Rider. It was probably around 1990, when the character was revived and made contemporary by Howard Mackie, Mark Texeira, and Javier Saltares. The book cost $1.50 an issue, which was an outrage in the days of dollar comics. Being a much skinnier lad in those days, I was able to skimp on meals to pick up the occasional issue with my saved-up lunch money. Of course, there would be gaps in my collection, and after a while I realized that I couldn’t keep up with the storyline, especially when it became too convoluted and I stopped caring about the characters.

I went back into the history of Ghost Rider and read a sampling of his adventures from the ’70s until now. I also finally sat through the mediocre 2007 film directed by Mark Steven Johnson (of Daredevil infamy), and I’m glad I didn’t rush to go see it in the first place. Why is it so hard to get this iconic character right? One factor could be that it’s such a loose premise to begin with, one that anchors itself on a guy with a flaming skull riding something.

The confusion begins with the creation of the character. There was a Western-themed character called Ghost Rider that Marvel used in the 1960s, which in turn was based on a comic book character from the 1940s. Famous comic book writer Roy Thomas teamed up with original 1940s Ghost Rider artist Dick Ayers to make this happen. That character would eventually become The Phantom Rider in the ’70s, due to a character presented to Roy Thomas by his friend and early ’70s Daredevil writer Gary Friedrich. Originally, the character was going to be a Daredevil villain, but Thomas insisted they try to launch a series based on the concept of a demonic motorcycle rider. 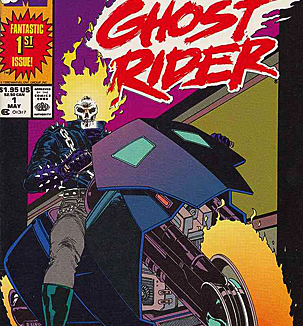 Friedrich, Thomas and artist Mike Ploog would bring the modern Ghost Rider to the page, and the elements of who did what (essentially, who came up with the flaming skull) would lead to the 2007 lawsuit by Gary Friedrich. The character first appeared in Marvel Spotlight #5, released in August 1972. A regular series followed in 1973, and over the course of 81 issues the tale of Johnny Blaze was twisted and contorted to try to justify the framing device and atmosphere of a guy who’s a supercool carnival stunt rider by day and a supercool-looking (but kind of dickish) demon and Spirit of Vengeance by night. Since I read these in the phonebook-like Marvel Essentials collections, I would have to say the 4th and final volume of the original series is when the writers finally get things right, and even then they’re still trying to make the origin story logical!

The strengths of the ’70s Ghost Rider series was how much it was a creature of its time. The combination of ’70s stunt bikers like Evel Knievel and horror comic books was excellent when done right. At other times, the idea was completely ridiculous. Eventually, the origin of Johnny Blaze making a deal with Satan to save the life of his foster father Crash Simpson was retconned, and THE Devil instead became the resident Marvel Satan stand-in, Mephisto. With all of its ups and downs, though, Ghost Rider managed to make it into the ’80s, and Johnny Blaze ultimately freed himself of his possession by an asshole demon named Zarathos. This was after the nature of his possession was played around with, and there was even an attempt to make him convert to Christianity to be more in control of the demon.

Fast forward to 1990, and the time seems right to bring back the Ghost Rider. Dark anti-heroes were the order of the day then, and Ghost Rider returned as a Brooklyn-based vigilante named Danny Ketch, who blended right in with the Punisher and Wolverine and even teamed with them in a limited series. This was the Ghost Rider I remember. While the art is for the most part excellent, the stories are very much par for the course of that time. At its best, the book goes into gruesome supernatural crime fiction with tons of action scenes; at its worst, it’s a lame blueprint for bad Image Comics. 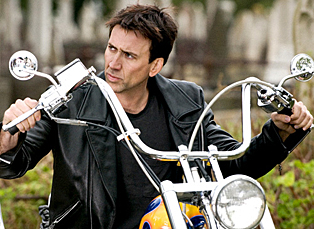 Eventually, the writers had to figure out the nature of Danny Ketch’s possession, too. It turns out that he is possessed by a different demon than Johnny Blaze. It’s then revealed that Johnny Blaze and Danny are long-lost brothers whose family are inheritors of a mystical curse related to the Spirits of Vengeance. More spirits are then introduced, most notably Vengeance, who’s basically a combination of the two previous Ghost Riders. It gets weird and convoluted, and finally Marvel pulled the plug on this Ghost Rider’s series in 1998 (on a cliffhanger no less!). So sad that Danny Ketch ultimately shared the same fate as ALF, with his once-popular series ending on a cliffhanger due to indifference. It wouldn’t be until 2007 that Marvel wrapped up his storyline, much like how ALF’s story concluded in the 1996 TV movie, Project: ALF, six years after the final episode of the show.

The lesson learned? Ghost Rider works best in small bursts. A few series came and went, and finally, with a movie forthcoming, Marvel got it right in 2005 with Garth Ennis and Clayton Crain’s six-issue Ghost Rider: Road to Damnation. The series featured Johnny Blaze as Ghost Rider, trapped in hell trying futilely to escape. It was a typically twisted Ennis story that featured elements of the Old West, spiritualism, chaos and twisted goriness. Right before the movie came Ghost Rider: Trail of Tears, which was an awesome, moody, Civil War-era comic by the same creative team, and it focused on a past incarnation of Ghost Rider. I was on Team Ghost Rider again after reading these series and eagerly awaited the upcoming movie. Well, until I saw the trailers.

Ghost Rider, the 2007 film starring Nicolas Cage, Eva Mendes, Peter Fonda and Sam Elliot, did not sit right with me from the get-go. Then the reviews came out and confirmed my fears. When that movie was released, the magic of seeing every comic book character translated to film had waned. I didn’t get around to watching the film until a week before writing this, out of fear that it would have the same wet-blanket feel as Mark Steven Johnson’s Daredevil movie (and it did). 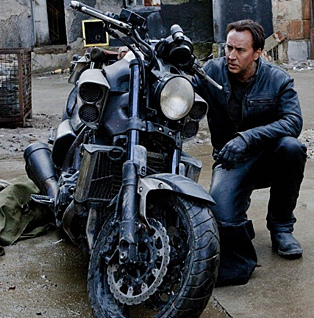 Having read of number of Ghost Rider comics before seeing the film, I had a fair idea what Johnson and apparently longtime Ghost Rider fan Nicolas Cage were trying to achieve. Unfortunately, the movie tries too hard to capture the madcap grindhouse nature of the old Johnny Blaze series, mixed with elements of the ’90s Danny Ketch character and the feel of a slick, by-the-numbers comic book screen adaptation. It ultimately translates into a whole lot of “whatever.”

I appreciated Johnson’s incorporation of the original Carter Slade Ghost Rider. But much like how he tried to cram all of Daredevil’s history into one movie, he tries again with Ghost Rider and still fails. Ghost Rider is a carny spirit of vengeance on one hand but also tears up the city streets and fights crime on the other. It doesn’t help that we don’t even see Ghost Rider until 45 minutes into the movie, so it’s basically Nicolas Cage trying to act weird but basically jobbing. A quirky character trait of Blaze in the movie is that he eats jelly beans out of a martini glass, because alcohol gives him nightmares. The filmmakers emphasize the romance angle with Eva Mendes, leading to a ridiculous scene with Ghost Rider derailing Johnny Blaze’s dinner date plans because punishing criminals comes first! It’s not the worst film ever, but it’s pretty terrible.

Which leads us to now. On February 17, Ghost Rider: Spirit of Vengeance will be released, because somehow a sequel was called for. Ghost Rider in the comics is currently a Nicaraguan woman named Alejandra, although with a movie coming out the Johnny Blaze version will most likely return. Multiple series have come and gone, and ultimately the mini-series seems to be the right framing device for the character. Like a grainy old horror movie, Ghost Rider should only be enjoyed in small doses. The original Johnny Blaze series managed to get this, with the best issues being standalone stories about terrible criminals being punished along the dusty lost highways of America or Ghost Rider simply fighting monsters, demons and freaks. The ’90s series initially nailed it as well, with the typical hard luck Marvel character being turned on his head by serial killers and supernatural psychopaths.

That being said, I’m cautiously optimistic for the Spirit of Vengeance. The trailers look insane, the directors are known for their wacky modern grindhouse output and there’s the Nicolas Cage chaos factor. No Eva Mendes in the cast means the storyline can focus on Ghost Rider dealing with crazy western supernaturalism while not having to make it back for his eight o’clock date. The movie could be interesting, or it may hammer the final nail into the Ghost Rider franchise. That’s OK. I’m perfectly fine with a miniseries like Road to Damnation or Trail of Tears coming out in five years, reminding me again of the potential of this Spirit of Vengeance.

Superhero Movie Smack Down – Round 3