You know it, I know it and they know it. Japan has lost its dominant role as ‘videogame capital of the world.’ The Japanese people have had a really rough time in the past year, though, so I thought it would be fair to point out that this article is not to bash them. Rather, it’s to give them a good-natured smack upside the head and a brotherly shoulder shake to remind them that they ARE good at something, just not what they keep trying to shove down our throats.

We Westerners have come a long way since waiting around for the next Final Fantasy or Zelda release. We started with the first-person shooter domination (this means nothing for the Japanese, it appears) and then we moved into holy territory, the last bastion of Japanese strength: the RPG. So much so, that now there are two kinds of RPGs. The, well, RPG – and the JRPG. The second type now brings a snarl to many a person’s lip and a sad look into others’ eyes. I get a little bit of both and I’m betting you probably do, too. Final Fantasy 13 was just not that good, and Kingdom Hearts doesn’t really need that many games on so many platforms. I realize I just sent a bunch of otaku into an apoplectic state, but I’m just stating the truth here. I also wanted a reason to use the word “apoplectic.” 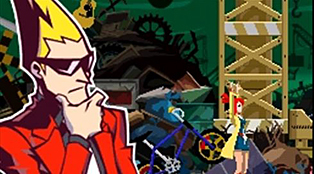 It’s not a good sign that I can currently guess the plot of any JRPG. “Young (boy/girl) is sent on mission to save the (world/universe) from an ancient evil that was previously contained in a (rock/ice/crystal) and now has to use (magic/ragtag group of friends/giant sword) to stop it and win the love of (uninteresting female/male figure), all while being assisted by (magic force/ancient wisdom) and (insert ridiculous floating creature here).

But enough about that. None of those games are where Japanese creativity lies anymore. They are a wasteland of a once great Tetsuya Nomura and a silent funeral service for the once beautiful artistic visions of Hironobu Sakaguchi (somebody get that cosplayer a respirator, please? I just heard a dull thud somewhere behind me. I’d go help, but Hideo Kojima is so drunk right now that he still thinks he’s capable of producing games that make sense).

I write now about a subculture of games that are being quietly released and yet contain the bulk of the potential. I can’t raise my eyebrow any higher about these titles, because I might hurt myself. Ghost Trick; 9 Hours, 9 Persons, 9 Doors; Catherine; El Shaddai. These games embody what Japan really does best: psychological fuckery. If you’ve ever watched Audition or the Japanese version of The Grudge, you are already well aware that the Japanese are masters of psychological horror. Those movies transcend your usual safe areas of “scary.” They skip gore altogether (at least where you expect it) and then throw it at you like a raw 20-pound steak when you are a whimpering, emotional heap.

This is one of the reasons Silent Hill 2 was so amazing and stood out like a diamond against the coal of the series. It used that same “attack the mind first, let it create the fear for us” mentality. The games I mentioned above are not horror games (although some are very creepy), but they are unique in the sense that they all fit into what I want to name the “WTF?!” genre.

Ghost Trick (Nintendo DS) forces you to solve puzzles as a ghost, and interact with other spirits to ultimately save the lives of the living characters you come to care about. The catch is that the story and gameplay are so different than anything you’ve likely played that it’s almost impossible to describe. Furthermore, the ending forces you to think back to every little detail you’ve seen. It’s a Capcom game, surprisingly, and I say that because other than Ghost Trick, Capcom has not made many good decisions lately (e.g., unnecessary reboot of the Devil May Cry series). Also, this game did well. Its creator was the lead on the Ace Attorney series, so no surprise there. It has a Metascore rating of 83 and GameSpot rating of 9.0 out of 10. 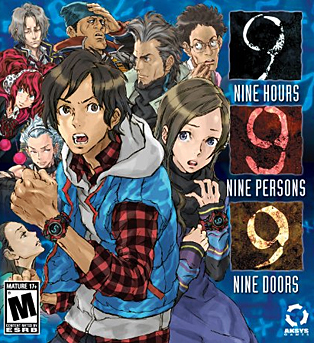 9 Hours, 9 Persons, 9 Doors (999) (also for Nintendo DS) starts with the idea of a “visual novel” and takes it one step further. Sure there’s a lot of reading, but the gameplay (and there’s a good amount of it) is all puzzle- and math-based. The plot is engrossing. Think Saw meets Clue meets old school point-and-click adventures like Syberia, The Longest Journey or Myst.

There are six endings (of which I’ve played five). It deals with ideas so complex and mind-engaging that you don’t even care how much you are reading. You must find your way out of an elaborate death maze set up for you by the mysterious “Zero.” You have to choose what doors to enter, and with each playthrough (multiple playthroughs are not only required but are looked forward to), you learn more about the characters you are stuck with. The storyline is chilling, and you’ll be theorizing about the “true” ending for days after – guaranteed. Furthermore, this is an M-rated DS game. That is rarely seen, and the game pulls no punches when it comes to violence and language.

Catherine (PS3 and Xbox 360) explores topics not generally discussed in a game because they seem mundane. Am I ready to get married? What about infidelity? Somehow the sick bastards at Atlus also decided to attach intricate block puzzles in the gameplay and place it all in a psychotic dream state. It uses logic similar to that I once read about in an interview with the creators of Silent Hill 2, where they talked about the terror created in combining two things that would otherwise be unnatural – sex and death. The multiple endings are great, and the general feeling you get through the entire game is, “I have never done anything like this in my life. Also, I’m inexplicably creeped out.” Three cheers, Atlus. Your game is amazing.

El Shaddai (PS3 and Xbox 360) was another game that came seemingly out of nowhere, unless you were one of the people following its artistic progression and development. Lovers of hack and slash games, Okami-style art and anything bizarre may not have picked this up, because it wasn’t blasted in their face the way Final Fantasy, Kingdom Hearts and Dissidia were, but this game has many secrets to it and is being taken from a story so ancient (The Book of Enoch), that Lucifer is literally a character you interact with. There is nothing scary about this game, but it’s a real thinker, and the environments are never anything you can predict. 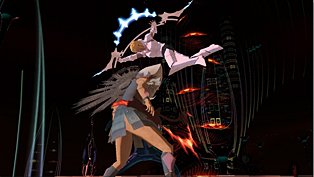 What this all proves to me is that Japan is currently not using a vital part of its gaming resources. It is capable of making some of the most thought-provoking and scariest games and movies in existence, but its main AAA titles touted are those that mostly appeal to a high school, just-hitting-puberty mindset. That’s fine and all, but what about your mature audiences? Remember games like Silent Hill 2, Fatal Frame and Siren? How about the intricacies of the original Parasite Eve? I still recall the overarching, dark X-Files feeling of Fear Effect. This is how you cultivate new, award-winning and (more important) money-making IP’s.

Japan, you have done this before. This is how you retain your sense of “Japan”–ness in gaming but give international audiences a taste of something new that they aren’t getting from the Western world. The scariest game I last played was 2005’s Condemned: Criminal Origins (some might say F.E.A.R. and Amnesia also live up to this title) and the most thought-provoking game I’ve had lately was Limbo (I’ll also give a nod to the Assassins Creed series).

Sure, you won’t be pulling in Call of Duty numbers with Catherine or El Shaddai. But keep in mind, Catherine won Atlus the “Biggest Surprise of 2011” from TeamXbox and was alongside Ghost Trick for “Best Animated Video Game” in IGN’s Best of 2011 awards. The audience is out there. People are watching you, Japan, and they’re waiting for your next big thing. Don’t let us down. Give us something to think about for weeks or, failing that, scare the shit out of us instead in ways that only you can.

Just Another TIE in the Death Star
Previous Post

Not Even in the Face of Armageddon