Well, now we know how they’re writing themselves out of Batman, Inc., right?

Yesterday, DC Comics announced they will be rebooting their entire line with Justice League # 1 by Geoff Johns and Jim Lee.

Dan DiDio, DC Comics’ co-publisher told USA Today, “[t]his was a chance to start, not at the beginning, but at a point where our characters are younger and the stories are being told for today’s audience.”

DC’s SVP of Sales told retailers via letter,”the new #1s will introduce readers to a more modern, diverse DC Universe, with some character variations in appearance, origin and age. All stories will be grounded in each character’s legend – but will relate to real world situations, interactions, tragedy and triumph.” 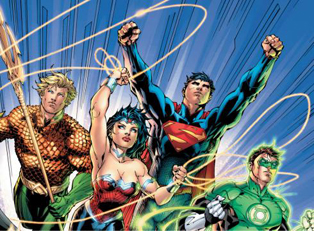 He went on to write, “[w]e have taken great care in maintaining continuity where most important, but fans will see a new approach to our storytelling.”

I just have one question:

What the fuck does that even mean?

I’m not the biggest Marvel Zombie on the block, but at least those guys know how to brand and stay on message.

When they announced Siege and what it would bring to the Marvel Universe, they were pretty damn clear on the book’s purpose – get the Avengers back together and dethrone Norman Osborne.

Thus far, all we’ve gotten from DC is an image of the JLA in V-necks and some inconsistent hype copy. This smacks of the exact lack of cohesion that led to Mr. Johns having to reboot the DCU a few years ago in Infinite Crisis. He did a fine job with that book and it’s still one of my all-time favorite crossovers.

Talk about a marketing fail.  There’s so little information about the reboot and what is out there is confusing, if not completely contradictory.

Don’t tease us, DC. That’s what bachelor parties are for.

Ian is excited to read Hellboy: The Fury and Criminal: Last of the Innocent tonight. He’ll probably write about it on Twitter.  Follow him via @IanGonzales.