Who Are The Mystery Men? #1

I love pulp. I love everything circa the 1930’s – 1950’s. I love the cumbersome individuality of the automobiles, the primped sleekness of clothes and hair, and the aura of the Golden Age.

So technically it’s unfair for me to write about Mystery Men because I’d probably love it anyway, but I’m going to recommend this for two reasons: first, it’s a limited series (only five issues) so it should have a definitive ending and a structured plot; secondly, it’s an attempt to expand upon the Marvel Universe’s Golden Age. 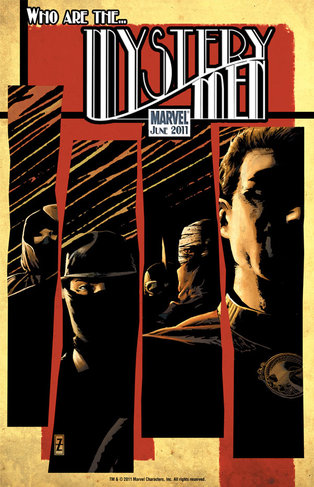 I equate a lot of things to Watchmen because of its developed characters, deep plot, and overarching mystery. Much like Watchmen, this series starts with a murder except we all know who did it. We see it occur. What’s more interesting is the fact that the man who slaughters the poor starlet can also make himself appear as anyone he wants.

Bad news for the good guys.

[The Revenant] appears out of a mist to attack his foes (or policemen in this case) and catches bullets with his teeth.

Supposedly, traditional Marvel characters are going to make appearances in Mystery Men, but David Liss is creating a new set of heroes from scratch in this issue. The first is “The Operative” (I know, I know — eye roll at best) who is a cat burglar of sorts. He dresses like The Shadow, and looks like Clark Gable, but he’s pretty bad ass when he wants to be. The second character is The Revenant who is much more like The Shadow. He appears out of a mist to attack his foes (or policemen in this case) and catches bullets with his teeth.

I’m not sure what to make of this yet. It’s got the feel of an epic murder mystery, and I think Liss is hinting at the Cosmic Cube (which would really suck), but I’m going to give this series a chance because it’s a halfway decent read. The cops tend to be a bit stereotyped (think every stereotype of a crooked cop), but the supernatural undertones give the story a creepy feel.

The more I look at this comic, the more I see Watchmen in it. But, hey, if you’re going to emulate something, why not go for broke? Anyway, I’m intrigued by Mystery Men, and I definitely want to find out more about them. If you love pulp, not only in your OJ but in your comics, I think you’ll find Mystery Men satisfies that craving.

Citizen Cold, Flashpoint, Screamland, Who Are The Mystery Men?