Last year, I watched House of Dracula at the Lafayette Theater’s Horrorthon. The 35mm print was so pristine that I felt like I was transported back to 1945. Enraptured by both nostalgia and the picture’s crispness, I completely forgot that it is one of the worst Universal monster movies ever made (well, it’s tied with House of Frankenstein for that dubious title). However, as Mike Mignola writes in Hellboy: House of the Living Dead‘s dedication, “If you grew up with them, they will always be great.” How true those words are. 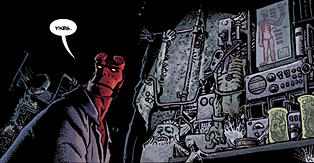 Dracula, Frankenstein’s monster, the mad scientist and that sad sack, Larry Talbot, sharing the screen together was just so much damn fun, it didn’t matter that they were kind of terrible. It’s that sense of fun that permeates Hellboy: House of the Living Dead. Mike Mignola and Richard Corben pulled one over on us, though – they used this tale to further deepen Hellboy’s character and the decisions he made in Hellboy: The Fury.

House of the Living Dead begins with tragedy. Hellboy narrates the tale of his three luchador friends and how one (Esteban) was transformed into Camazotz, the Mayan death bat. While the narration recaps the events of Hellboy in Mexico, Richard Corben’s art stays on the final scene from that comic: a statue of the Virgin Mary that serves as a shrine to the Lucha Libre vampire-hunting adventures of Hellboy and his friends.

The story picks up right where Hellboy in Mexico left off. It’s 1956 and Hellboy is off the BPRD’s grid. He’s stone drunk in Mexico, mourning Esteban. In order to pay for his tequila, Hellboy makes a living as a luchador, demolishing all opponents in the ring. He drinks and fights his way through the memory of killing Camazotz while haunted by his inability to save his friend.

Then Raul shows up with a photo of a woman. She has a knife to her throat. Raul implores Hellboy to wrestle his master’s champion, lest the girl, Sonia, be killed. Hellboy begrudgingly agrees.

Throughout the book, Mignola and Corben show us Hellboy as a hero who failed. Heroes are supposed to save the day in the nick of time. That’s what Superman comics teach us, right? Well, that doesn’t happen here. A good man is dead because Hellboy got drunk and that thought tortures him. If Hellboy in Mexico was about all good things coming to an end, House of the Living Dead is the tale of a hero learning to accept that he can’t save everybody, no matter how hard he tries.

And what better creatures to teach Hellboy this lesson than the classic monsters of the silver screen. Mignola and Corben use these characters to give readers that black humor we’ve come to expect from a Hellboy comic. The first time Hellboy sees Frankenstein’s monster in the wrestling ring, his reaction is classic Hellboy. “Crap,” he says, and then he gets in the ring. He faces down the monster in order to save an innocent woman from a sadistic hunchback and a mad scientist. 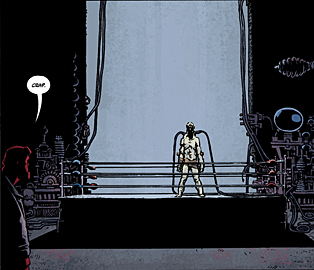 Mignola’s writing and Corben’s storytelling are tight – a lot happens in 56 pages. Hellboy battles a wolf man, Dracula’s vampire brides and other Universal-inspired classic monsters all to save Sonia – and himself. This story takes place fairly early on in Hellboy’s life and it shows us the moment that the character we met in Seed of Destruction is born. That Hellboy didn’t drink himself into a stupor when Professor Broom died – that Hellboy went and solved the case.

The last panels also echo Hellboy’s final fate in Hellboy: The Fury #3 and lightly teases what’s to come in next year’s much-anticipated Hellboy in Hell. The scene adds another layer to Hellboy’s sacrifice in The Fury. He knew what would await him after death in 1956, thus cementing Hellboy’s status as a hero.

Yes, Hellboy is dead, but his life spanned from the 1940s to 2011. We only really got to see the last 19 years of his life unfold in real time, so it’s great to see this story fill a gap and expand both the character and his history. It reminds me a great deal of the Hunter Rose Grendel stories Matt Wagner’s told since Hunter’s demise.

Hellboy: House of the Living Dead is the last Hellboy story we’re going to get until Mike Mignola returns to take the art reins for Hellboy in Hell next fall. It’s a great note to go out on before we see Hellboy enter his kingdom. All the beats in this book are spot on, making this comic well worth the $14.99 price tag.

Hellboy: House of the Living Dead

Racing Is an Art – Forza 4 Reviewed