I’ve been pretty lukewarm towards Dr. Manhattan during its four-issue run, partially because I had a hard time navigating the existential purpose of the series. Now with issue four, the point becomes clear and it’s that we’re experiencing, firsthand, Dr. Manhattan’s ability to see his own future and the linear way in which time moves around him.

So why does Ozymandias play such a vital role? 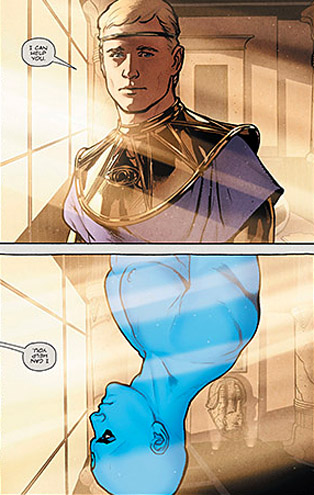 At one point, the comic switches to Ozymandias as we experience when he first comes up with his plans to destroy the world in order to save it. The narrative is interesting because Adrian obviously doesn’t want to tip his hand to a walking god, but I still question the purpose.

This is the send time Straczynski has shifted his narrative to other characters. He did the same thing in Nite Owl, spending at least half of his time on Rorschach rather than on Dan Dreiberg. When he switches here, he takes a page from Scott Snyder and forces the reader to turn the book upside down and read the comic backwards before returning back to Dr. Manhattan.

But this time, the act feels like a gimmick. Straczynski also follows Jon after he leaves Earth to create life. I have an issue with this move, as the comic is called BEFORE Watchmen. I’m worried that DC will see this as an opportunity to follow Dr. Manhattan’s adventures in another solar system as he attempts to create life. The finale shows a bit of hope for the character, but he proved that he was beyond his human apathy in Watchmen. To see him take that newfound sense of appreciation for life elsewhere is extending a story that was artfully ended in Watchmen.

If I could get more Adam Hughes, however, I would be very happy. The art in this comic is gorgeous. His characters have such smooth finishes and impressive detail that the book is page after page of beautiful colors and layouts. The thick outlines help highlight the characters beyond their surroundings, and Laura Martin’s colors add so much vitality the imagery, particularly in the final pages when Jon finds an alien world and claims it as his home.

The one positive of this series was the art. Dr. Manhattan is visually one of my favorite comics. The story, however, leaves much to be desired. Granted, Straczynski tries. He gets into Jon’s mind and occasionally pulls out these wonderful shining nuggets of literary brilliance, but they never deliver a strong, substantial impact.

I can admire what Straczynski was trying to do, and the epic scope that he was trying to convey. With a lack of a clear central focus, however, the story meanders until it ends. And because the story’s purpose is never explicit, we’re left wondering what it achieves.

Guardians of the Galaxy #0.1 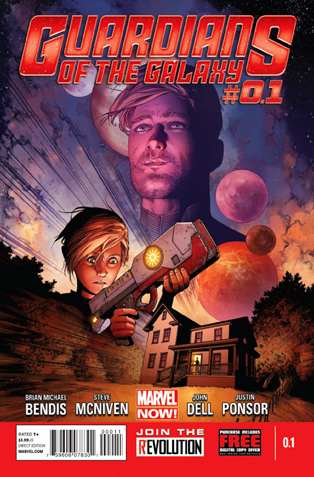 I’m sure this comic was put together as a way to introduce Marvel movie fans to the Guardians of the Galaxy, considering they’re next in line for a movie treatment. But after this first issue, I don’t think Brian Michael Bendis did enough to really hook readers or enough to introduce the characters to a new audience.

Bendis basically breaks the comic down into three parts: Peter Quill’s inception, early years and transition to modern day. The drawback of doing this is that the story never plants itself firmly. First, we focus on Peter’s father, J’son of the planet Spartax. J’son is a scumbag of a father, impregnating an Earth woman and then taking off for no real reason save for the fact that his crashed ship is fixed.

Peter’s childhood doesn’t give us much to go on, either. He falls into too many stereotypes to ever really have any individuality. He’s a comic book nerd who has only one friend, and he gets into a fight defending some girl’s honor on the playground at school. Then Bendis kills his mother and fast-forwards time ten years to bring us to Peter Quill’s life aboard some galactic transport as he talks with Tony Stark.

The more interesting aspects of the comic – like Peter’s royal heritage and the aliens sent to kill him – are skipped over in favor of banal character development. The much more relevant history – like the first time he gets his father’s gun, or the life he lived after his mother was blown apart by lasers – is given to us in four panels of expository dialogue. As a result, I’m nowhere closer to understanding or caring about the Guardians of the Galaxy.

The one bonus would be Steve McNiven. I love his style, which is a lot like Gary Frank’s – clean art, sharp ink lines and detailed images. Occasionally, he gets a bit crazy with character hair, so that people constantly look they’re standing in wind tunnels, but these moments don’t ever fully detract from the art work. The final splash page with all the characters is a thing of beauty. Sadly, we don’t get to see more of Peter Quill’s crew than this, but at least Rocket Raccoon looks cool.

I’ll give Guardians of the Galaxy another shot next month with issue #1, because it’s written by Bendis and because I am interested to learn more about this series. But if this issue was meant to hook the reader, I would say that the comic didn’t do its job. There’s not enough to really draw the reader in or give him a detailed understanding of the characters. The comic plays into too many stereotypical tropes of heroes, and this ends up feeling like another superhero story rather than an important introduction for new fans.

We’ll learn why this group guards the galaxy, but not learning enough with the onset of the series is disappointing. 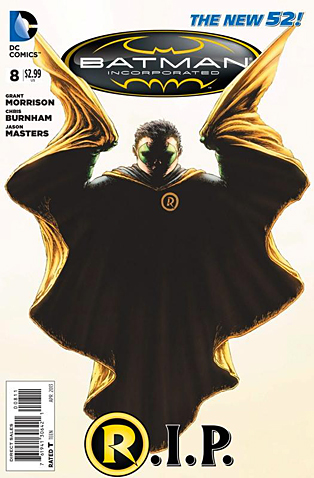 Bannen’s Book of the Week: For those of you who haven’t been following the comics news this week, I warn you in advance that I will spoil this comic for you (if it hasn’t been spoiled already).

Reading this book was a matter of waiting for the death to occur. DC did a poor job of keeping the secret, and the news media jumped at the chance to report about a major death in the pages of Batman Incorporated. What this did, however, was make it so that as I was turning the pages, I was always looking to see how Damian Wayne died.

This changed my reading experience because had I not known about Damian’s death, the ending would have come as quite a shock. I still can’t believe that he’s dead (this is a comic book after all, and one of the caveats of the comics is that no character ever really dies), as even the final page doesn’t let on that he’s died. Instead, he just looks really badly injured.

What makes the comic work is Morrison’s quick pacing and intense action. Damian definitely plays center stage in the story. Morrison plays up his abilities as a fighter and a tactician, but as the fight drags out, Morrison ratchets up the brutality, making Damian’s demise a painfully visceral experience. He’s tough, but seeing the beating he takes is cringe worthy. While the comic starts off somewhat light and humorous, the ending is one of the darkest Morrison has ever written.

Morrison also makes sure to showcase what makes Damian such a great hero. The story follows Damian as he works he way through the chaos of Gotham, eventually ending up alongside Dick Grayson. The poignancy of their interactions makes more sense by the end of the story, and here’s where Morrison also succeeds – he knows how to give a hero a heroic death, one worthy of his being.

The other aspect of the book that works well is Chris Burnham’s page designs. Rather than just plodding along panel by panel (like a Dave Gibbons comic), Burnham gets creative with the construction of images, creating a mashup of moments that overlap but which also never lose their flow. Nathan Fairbairn’s colors aid the imagery by vividly highlighting the action, as well as adding emotional depth – particularly in Damian’s final moments.

I still can’t believe that Damian is dead, but if Morrison chose this type of story as a sendoff, the Boy Wonder went out like a champ. Morrison also delivers a strong emotional impact with Damian’s death, and what I’m more interested to see is how Bruce reacts. Morrison leaves Batman mostly out of the issue, and we’re not really shown much about his emotional state. I think we can expect some type of retribution, but with Morrison at the helm, anything can happen.

My only hope is that Damian, like his father, is not dead, and that Morrison will find a way to bring him back because, admit it, Damian really is the best Robin.