I was one of those kids growing up – at a young age I was fascinated with cars and had pictures of some of them plastered on my walls. It was the subtle lines and look of them that had me hooked. I saw them as works of art and hoped that one day I would be able to get behind the wheel and unleash one. I can say, to this day, I have yet to accomplish this dream, but with Forza Motorsport 4, I unleashed the kid in me.

Enough to make any gamer blush

Forza allowed me to get behind the wheel of some of my favorite cars and push them to the limits while pushing and shoving my opponents out of my way. It was a nostalgia trip to take out a Ferrari F-40 and blast through turns and bends like I was given the keys to the real thing. Unabashedly, I was smiling the whole time because Turn 10 studios has released a work of art.

Forza Motorsport 4 is one of the most beautiful driving games I have ever seen. Racing around the track and seeing your opponent’s car reflected in the paint job, all while bending into the final turn and seeing the lights reflect off windshields, is enough to make any gamer blush. Not to mention the design work put into the user interface that had me gushing before I even put my foot on the gas. The vehicles don’t look too shabby, either. Turn 10 has recreated an encyclopedia of cars right down to the gas lid. This attention to detail is visible in a showroom mode, which allows the player to walk around, sit inside a ride and even turn on the ignition. All this is accompanied gracefully by the impeccable words of Jeremy Clarkson from Top Gear filling you in on what he thinks of the old bucket of bolts. 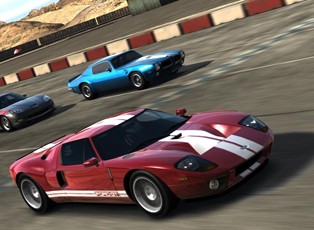 Gameplay is tight with top notch AI to boot. Your virtual opponents are smart and experienced drivers, so practice is in order. If you choose to start a career, like you can in most driving games, you start in the basement of races and have to win and work your way up to bigger and better cars. Each race hinges on your pairing the right car with the track, as Forza allows you to custom-tune your car to give you the best chance at grabbing that checkered flag.

Driving is responsive, not to mention satisfying, as each car responds flawlessly. After a couple of races, I found myself getting more and more comfortable with the steering and can I proudly say that I never crashed – sort of. That Volkswagen GTI had it coming when he overtook me coming out of the corner!

Some artists work in oils on canvas, some in marble. Others, as Turn 10 has in this case, find a way to prove that zeroes and ones can produce true works of art. So even if you can’t afford that $1.5 million Pagani Zonda, at least you can get a virtual seat and let the horses loose.

Rating: Five out of Five Pies

Play backseat bingo along with @Dave Trainer. Forza Motorsport 4, from Microsoft Studios, is available exclusively on the Xbox 360.

Once Upon a Time in Mexico – Hellboy: House of the Living Dead Reviewed