I’ve always enjoyed the saying, “Everyone wants to be a rock star, but no one wants to work for it.”

This attitude was synonymous with the popular genre of guitar games that flooded the market back in 2005. It was an attitude that worked and gave everyone the opportunity to be a rock god, but those times have changed and all the rock stars went back to their dressing rooms and couches and have since retired.

The idea with those games was that anyone can play the guitar without knowing how to play. This proved to be a positive idea, yet there were groups of people that were turned on to the idea of actually playing the real thing through these games. Once they discovered the enormous difference between pressing a button and playing a bar chord, they quit. 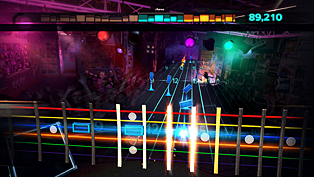 Rocksmith is not what I would consider a game – it’s a tool disguised as a game that teaches you how to play the guitar. And teach it does, everything from how to tune the guitar to full-on arpeggios – all one step at a time. You begin slowly learning note by note and getting in rhythm. As you start to get better, the song challenge and techniques get more difficult. Each step of the way, videos and practice tutorials are shown, allowing you to study and build your guitar vocabulary as well as your skill.

Rocksmith has very little of a game aspect. There is a “guitarcade” where you can use your skills to shoot down pixelated ducks (à la duck hunt) by playing the correct notes. These games unlock more the further in you get and are a fun way to practice technique. Yet the majority of Rocksmith is progressive learning on how to play the guitar. For beginners, it will not be easy and you will get frustrated (which is how we all started).

Every guitar game shares the color-coded strings and notes, and that’s no different here. Rocksmith will teach you the basic song beginning with the root notes. Master that and the game will start to throw in other techniques such as string bending, slides, switching and palm mutes. All this will be combined when you play a show, during which you play the songs you have practiced. You also get some curve balls to test you.

Song choice is strictly decided by the game, but the library is well rounded with many different music styles and bands to help you hone your craft. One moment you’re learning a Rolling Stones song and the next you’re in drop D tuning, rocking out to Muse and Red Fang.

I love Rocksmith. This is THE guitar game for you if you want to actually learn how to play guitar and have your own private tutor. Everything missing from previous guitar games is available here and encouraged. If you are looking to revisit any emotion you had when learning the guitar, this is the tool you need.

With that being said: For those about to rock, I salute you.

Rating: Five out of Five Pies
(a word about our ratings)

The Holler’s Screaming All the Time