The first time I saw the trailer for The Heart, She Holler, I didn’t quite know what to think other than it looked weird. After finding out the series was created by Wonder Showzen alumni John Lee, Vernon Chatman and Alyson Levy, I was immediately excited. When I had a chance to sit down with John Lee, Alyson Levy, Patton Oswalt and the cast of the show, I jumped at the opportunity.

The Heart, She Holler is the story of Hurlan Heartshe, a man raised in a cave and secluded from the world. He inherits a Southern town named Heartshe Holler. His sisters, Hurshe (Kristen Schaal) and Hambrosia (Heather Lawless), plot to kill him and take the Holler for themselves. It sounds like a deranged soap opera, only it’s a miniseries comprised of six 15-minute episodes.

The first thing I noticed about John Lee and Alyson Levy was their sheer excitement about the project. They were genuinely enthused about our interest in The Heart, She Holler. When asked where the show came from, Lee said, “It’s the Lord’s nightmare.” Levy continued, “It is our country’s nightmare.” 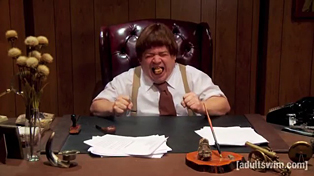 The two are both seasoned collaborators, having worked together on Wonder Showzen, Xavier: Renegade Angel and Delocated, and it shows in the way they are able to pick up each other’s thoughts and riff.

“This show is a fine-filtered, double-distilled nightmare of our country. We’ve just turned it, taken its essence and molded it into a nice miniature series,” Lee said. “We drew a picture and wrote [Cartoon Network] a poem and that’s how we got the show.” Levy grinned as Lee continued, “If you send them something weird, they have to call you back.”

“We had the idea for the show,” Levy said. “And before we took it to [Adult Swim], we went to Patton [Oswalt].” Lee added, “[Hurlan], an idiot in his rage, becomes intelligent and that seems like Patton.”

“I thought of Kaspar Hauser. That was my model – lethally nonjudgmental of the world to himself, that he trusts everything’s going to be awesome,” Patton Oswalt said of his character, Hurlan.

Kaspar Hauser, the 19th century German youth who claimed to be raised in a dungeon and told several tall tales in his short life, met with a rather brutal end. I hope the same doesn’t befall Hurlan.

“I have a 2-year-old daughter and there are times where I fear for her,” Oswalt continued. “She thinks everything’s going to be great and you gotta go, ‘Do I let her go get hurt now?’”

The look of The Heart, She Holler evokes a lot of the American South’s poor stereotypes. The sets look like homes that haven’t been updated since 1972.

“We built [the Holler] up and then made it really ugly,” Lee said. “The Holler’s screaming all the time.”

“I was constantly worried we were going to get fleas or bed bugs,” Levy added.

While the world of The Holler may be absurd and outrageous, the characters within aren’t aware of that. Their world has turned on its head, but this is still their every day. The emotional truth is still there.

“You can’t play it for laughs,” said actor Joseph Sikora. “You play it for the truth of the person. For all intents and purposes, these are real people in real situations that are just crazy. If you play things for laughs, you lose the real intention of the situation. People aren’t going to watch that. It’s not funny. It’s the difference between Dane Cook and Alec Baldwin. One is funny and one is not.” 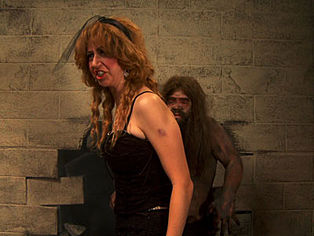 “She’s so angry and she wants it all! I loved it,” Kristen Schaal said of her character. “Getting to be Hurshe every day and getting to be so grotesque, hurting everybody, yelling and screaming and then getting back on a train in civilian clothes with my wig off, just remembering everything I did that day as Hurshe is very satisfying.”

When asked what brought him to The Holler, Oswalt said, “What I liked about the script is that it was something that was so alien to me and that’s what I wanted to do. There wasn’t anything that came from what I do as a comedian or writer.”

“This is a version of the South that people in the South are barely going to recognize,” he continued.

“I will put any world literary tradition against the American South,” said Oswalt. “The South will steamroller it. Russia, Ireland – they’re great. But for darkness and dysfunction, the South beats it. No better art or literature has come out than from the American South and I maintain that. It’s our Ireland, and beats it.”

When asked how she thought the series would be received, Schaal said, “It’s a whole story. It has to air six in a row. It won’t lose advertising even if it drops off, because whatever they’re hawking at the end of it, I’m gonna buy – like 3,000 Hardees burgers.”

The thought of someone with Kristen’s slight frame ordering 3,000 Hardees burgers had the table laughing.

When asked about a potential follow-up, Sikora implored, “Demand the Christmas special!”

Ian is screaming all the time, too. Follow him on Twitter via @IanGonzales. The Heart, She Holler premiered November 6 and runs nightly on Adult Swim at 12:30 a.m.

Patton Oswalt, The Heart She Holler

For Those About to Rock: Rocksmith Reviewed