Born in the trenches of World War I, J.R.R. Tolkien’s Middle-earth grew to become one of the most expansive worlds to ever grace fantasy fiction. Tolkien created an entire world history that never appeared in his actual stories, yet there are letters, notes, unfinished stories – all manner of apocrypha relating to Tolkien’s published works. Warner Bros. Interactive and Snowblind Studio’s Lord of the Rings: War In The North takes a stray line from The Lord of the Rings and expands it into a story using said apocrypha. The result is not a bad game per se, but it doesn’t tread new ground in gaming either. 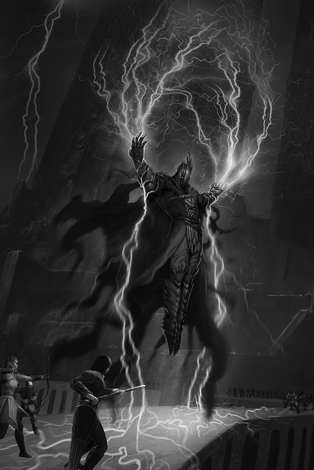 Eradan (the human Dúnadain Ranger), Farin (the champion dwarf) and Andriel (the Elven Loremaster) are the three playable characters in the game. The story begins when they meet Strider at the Prancing Pony, just days before Frodo and company appear. Strider tells them of the Sauron and his plans for the One Ring and dispatches them to hold off one of Sauron’s servants, Agandaûr. Agandaûr is amassing an army in the North of Middle-earth and someone needs to stop him.

And so, the other fellowship is formed and they’re off to distract Sauron’s ally. Along the way, Eradan, Farin and Andriel meet well-known LotR characters like Strider, Gandalf, Elrond and Legolas, but the real treat is meeting other Tolkien characters we haven’t seen outside of Tolkien’s prose. It’s a lot of fun meeting characters like Radagast The Brown and Elrond’s twin sons, Elrohir and Elladan.

The Great Eagles pop up in the game, too. Early on, your fellowship meets Belram, a Great Eagle who was trapped by Agandaûr’s forces. After you rescue him, he pledges to help Eradan, Farin and Andriel. So if things get too hairy, feel free to call on Belram. He’s quite helpful when a billion orcs and goblins attack – or a giant troll. It’s a fun, in-game use of Tolkien’s own little cheat. There are a lot of battles throughout the game. There’s also a lot of orc arterial spray.

I never gave much thought to orc arterial spray until I played this game, but every time I attacked a foe, I couldn’t help but have it spray all over the screen. The controls in War In The North are pretty basic – perfectly fine for the hack ‘n slash gameplay. There are some variations in the fighting, but not too many. When orcs attack, bludgeon them with your sword, axe or staff. There aren’t any God of War level chain attacks, but as the game progresses, players can put together some fun combos.

Players can customize the characters’ stats during the game. Leveling up is straightforward, as is managing the characters’ inventories. I mostly played as the ranger, so I made sure to encrust my sword with an Elven Stone of Strength. In addition to weapons and leveling up, you can add skill points to add various combos to your character’s arsenal. Eradan was formidable foe on the battlefield, so long as the frame rate could keep up with his orc blood lust.

The game does have some flaws and glitches. The more enemies there are on screen, the more the frame rate drops. There’s a battle in Mirkwood that is particularly annoying. In the beginning, the game does a pretty good job of varying the enemies your fellowship faces, but that levels off and the battles can get pretty repetitive. The one thing that annoyed me more than anything else was the damn loading screen. What is this, Playstation 2?

All three characters are balanced pretty well. In single player mode, you can switch amongst them between saves.  That said, the best way to play is the online co-op mode; that is where the game really shines. It’s a great place for LotR fans to gather and fight for Middle-earth.

As much fun as it is to meet Tolkien characters deemed too obscure by Ralph Bakshi and Peter Jackson, the story never feels like much more than what it is – a side story. Personally, I like side stories (heck, I think Gundam: The 08th MS Team is one of the better Gundam series, but I digress) but I feel it’s best to warn you, Dear Reader. These characters stave off their enemies in the north, shielding Frodo, Samwise, Gandalf, Aragorn and the rest from even more orcs.

While Lord of the Rings: War In The North wouldn’t appeal to hardcore gamers, it is a fun and challenging videogame. While it’s meant to be an online co-op game, the single player mode is enjoyable and your party’s AI won’t have you convinced that they’re agents of the Dark Lord (mostly).

Rating: Three out of Five Pies

Ian may not have the Horn of Gondor, but he does have a Twitter. Follow him via @IanGonzales and he will call you to arms against trolls of all shapes and sizes. Lord of the Rings: War in the North, from Warner Bros. Interactive, is available on the PlayStation 3, Xbox 360 and PC.

Lord of the Rings: War in the North