TLC has a new reality program, and if you look quickly enough during the premiere on December 18th, you may catch a glimpse of yours truly. The focus of the show?

I’ll admit that beforehand, I was very nervous.  I’ve never done speed dating before, and Mr. John “Hambone” McGuire was kind enough to be on hand to help ease my nerves. 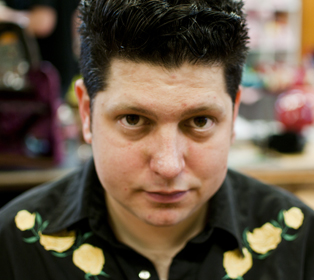 There was a shortage of women for this event (please try to keep your sardonic laughter to a minimum), and, as a woman, I had the upper hand here. It is a well-known fact that in giggling groups of two or more, girls in any setting can be intimidating. This is speed dating, though, so the intimidation factor grows exponentially. Some women were in cosplay (Female Green Hornet and Spock with the crocheted ears and hair were REALLY good), though the majority was like me, in jeans and a tee.

There were about twenty participants, give or take, on either side of the room (we were split 8th-grade-dance style). Then the girls were each told to take a seat. We were given three minutes with each participant, and then the boys got to switch chairs. I have to say, the hardest part was introducing myself as #20 and not being to give much more information than that.

I could take this opportunity now to openly mock the other participants. However, I was one of them. And everyone was as nervous as the next person. Most participants were very kind and open, genuinely looking for someone special. There’s nothing funny about that. Yeah, I made you feel bad there, didn’t I?

Afterwards, as I recovered in the press room (two hours was a long time to be speed dating!), I spoke with the aforementioned Mr. McGuire about women going to the event in provocative cosplay. He asked me if I believed any of them to be “ringers” or women purposefully placed at the event by TLC. While the thought hadn’t crossed my mind initially, it wasn’t a hard truth to accept. I’m not accusing TLC of anything other than wanting to make good TV, though. That is their right. I was lucky enough to not have too many scantily-clad women in my session. A fellow female reporter was not so lucky and in her first session (you could attend as many as you wanted to), she received no phone numbers at all. She fared much better in the session I was in.

So, if you choose to watch many geeks searching for that special geek or geekette, tune in to TLC. I wasn’t featured, but you can probably get a glimpse of me. I’ll be the brunette in the purple tank top. Think of this as a type of Where’s Waldo.