For the last two years, my friend Mike organized an event aptly named The Scare Tour, where we visit various haunted houses and Halloween attractions across three states over the course of several days. Last year, we visited four creeptastic venues and this year we invaded five others (though only one merits inclusion here). Here is an account of three brave men who ventured out in search of the ultimate haunted house!

A Note on the Ratings

I’m using a skull because I love skulls and feel that they are not only be related to Halloween, but to all things spooky and scary. I’m also using a maximum rating of six because, along with its two identical siblings, it forms the most diabolical number in existence (Five just isn’t an evil enough number…). Now, on to the haunted houses! 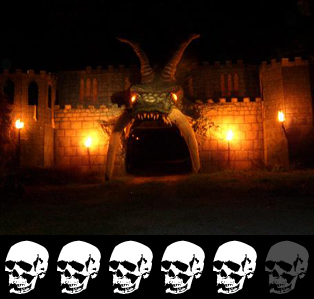 Our first encounter with rural, barnyard scare fests was at the Bates Motel in Glen Mills, Pennsylvania. Bates is a three-part haunted attraction that includes a hayride, haunted house and a haunted corn field. And by “haunted,” I mean actors in suits jumping out from behind a wall in almost pitch-black lighting.

Bates Motel was included in our combo package with owner Randy Bates’ newest (at the time) acquisition, Pennhurst Asylum. That’s what we really wanted to see, but it was a no-brainer to take in the sights at the Motel first.

At first glance, it seemed like it could be a bit of a letdown but I can say that after two years of visiting, this has become one of my favorites. The haunted house portion had tight hallways and was dimly lit, providing an initial claustrophobic reaction. Actors jumped out of the damnedest places and always spooked someone in our group. The props looked good and they also had a good amount of animatronics.

We also made it through the cornfield, which started out with a vortex-like effect in which you are funneled through some type of strange material (which reminded me more of birthing a baby or a turd). One of our group members panicked and pushed me into our equivalent of one half of the Wild Samoans. Obviously, a sandwich-type effect happened, which ended up with the three of us being flushed through a tight hole.

There were some great scares and actor interactivity within the cornfield, but expect to do some walking. We missed the haunted hayride due to time constraints, but heard it was the best part of the whole attraction. 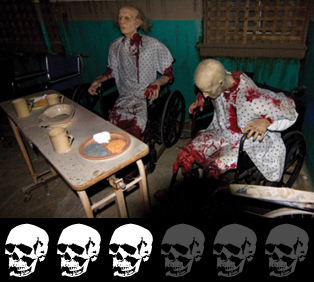 Pennhurst Asylum is a haunted attraction built within the walls of a former institute for the mentally and physically disabled. The walk up to the actual asylum was long but scenic – it is off in a forested area littered with buildings that opens up to an expansive front courtyard. The Pennhurst building is very attractive as a haunt for its architectural nuances alone. The somber building, the spooky feeling and the actors that mingled with the crowd all gave one a sense of impending dread.

Pennhurst’s ultimate drawback on our first trip was the line. We waited about four hours just to get into the haunted house that was about a 20 minute walk-through. Can you say rip-off? It was Pennhurst’s first year, so I can’t be too hard on them, even though the haunted house portion kinda sucked – maybe I was just mentally done at that point (and an actor collided with my skull and almost knocked me out, never a good thing).

This year, they added a ghost tour of one of the haunted buildings and I hear they have received great reviews, but I chose not to return for fear of the dreaded lines, which also reportedly returned this year. With a few tweaks, some ironing out and the elimination of an ultra-long wait, Pennhurst Asylum could be one of the best Halloween attractions. 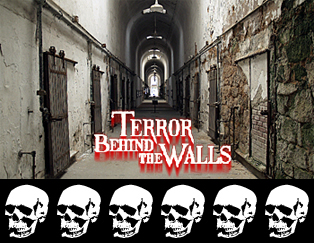 My favorite attraction, hands down, is Eastern State Penitentiary. Before I get started, just do yourself a favor and take a ride to Philly and take part in their event, Terror Behind the Walls. Trust me.

What seals the deal for me is the history. It’s well over 150 years old, it’s the first penitentiary and it’s smack-dab in the middle of a hip Philadelphia neighborhood. They run day tours all year long, but it’s during Halloween that they build an interconnecting maze of haunted rooms within the penitentiary itself. Even better, if you purchase the VIP package, you get a nighttime flashlight tour of the prison and explore areas like The Hole, Death Row and the notoriously haunted Cell Block 14. Once the 25-minute tour is over, your VIP status lets you cut the two-hour plus line to the main attraction.

Eastern State Penitentiary is great thrills, effects and a pretty sweet dark tour of a penitentiary. Try to survive Terror Behind the Walls! 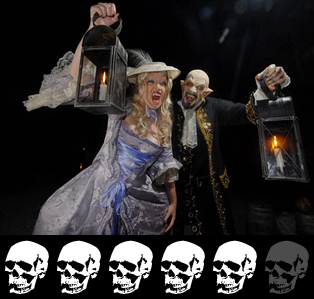 Every kid knows Washington Irving’s story, The Legend of Sleepy Hollow (even if only by way of the classic Disney cartoon), but for residents of New York and North Jersey, it takes on a special significance because Sleepy Hollow is an actual village [Unwinnable Fact: It was actually called North Tarrytown until 1996, when the residents voted to change the name in honor of Irving’s seminal story].

Every Halloween, Sleepy Hollow celebrates the story of the Headless Horseman through a number of events. New to 2010 was the Horseman’s Hollow, an outdoor/indoor walk-through of a small town infested with Revolutionary-era soldier zombies, demons and an actual horseman – headless – riding on his black steed. The makeup and effects were well done and it had plenty of scares!

We wound down with a  walk through the famous Great Jack O’Lantern Blaze in Hudson Valley to view thousands of carved pumpkins forming graveyard scenes and giant dinosaurs. For the combined experience, Sleepy Hollow is not to be missed. 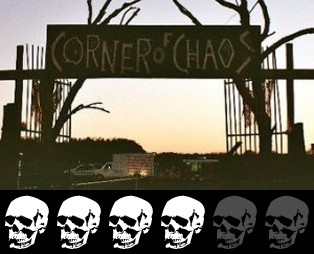 Having survived the madness of 2010, I agreed to trek out in search of the next best haunted house, but after a few duds, I really didn’t have anything good to report. However, one stop on this year’s Scare Tour wound up being horrific fun – Corner of Chaos: Scream Acres.

I should have known from my Bates Motel experience not to judge a book by its cover, but I saw a spartan farm with a large cornfield  and a few buildings and thought I was about to be disappointed again.

However, I had a good time at Scream Acres. They didn’t have much to offer food-wise, but we were there for scares and they delivered. The best attraction was the Barbaric Barnyard, which had a very Texas Chainsaw Massacre/House of 1000 Corpses feel.

An unexpectedly fun, if short, trip.

Ken barely survived two seasons of haunted houses, farmland and cramped cars with oddball odors. Compare survival tips and get your MacGyver on @UnWInToyHunter on Twitter.