Not as recognizable as some of his peers’ work, Bob Burden’s contributions to the comic book universe are certainly, well, different. Unwinnable’s Erik Weinbrecht had the opportunity at New York Comic Con to sit down with the charismatic Mystery Men and Flaming Carrot creator to pick his brain about comics, property theft and Electro-Fiction. 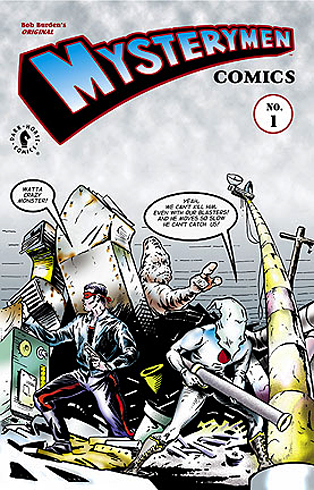 Unwinnable: What inspired you to get into the comic book industry?

Bob: I wanted to tell stories. I realized there was another language out there – a language of storytelling.

When I was 10 years old I was with my grandparents in Florida. There was this new station that showed all the foreign films and I was watching Kurosawa’s Seven Samurai. It dawned on me that at that point all the movies I saw were voyeuristic. I can remember that turning point for me – I saw Seven Samurai and I was like, I want to write. Did I go out and make a movie? No, but I figured I could draw.

Unwinnable: Where did that experience take you from there? What were some of the early ideas that spawned from that time?

Bob: One of the things they say about artists is that you spend half of your career getting all of these things into your art and the other half getting it out, becoming your own person. I realized early on that I needed my own voice to stand out. I wanted to do something that was fresh, but I still had to sell comics, right? So I took this character The Flaming Carrot, who kind of looks like a superhero but is really this bizarre, surrealistic, revolutionary sort of thing.

So we did this wonderful comic called The Flaming Carrot, and I didn’t know what the hell I was doing. I never went to art school – I wanted to have fun with it.

Unwinnable: I think these unconventional comic characters like Flaming Carrot and the Mystery Men are more relevant than ever. Do you see them in your future going forward?

Bob: Who knows? When we first did Flaming Carrot it was a sort of garage band superhero; I don’t know where this will take me.

Unwinnable: What are you working on now?

Bob: I’m one of those guys who stands on the street corners flipping the sign in the air. You’ve seen those guys? I’m one of them. I got real good at it. I hit this lady in the head with one the other day, but otherwise it’s been good. [Laughs]

But seriously, I’m working on a number of new projects. I’m about to premiere an art form that I invented back in 1972 called “Electro-Fiction.” [It’s] a precursor to “Nuclear-Fiction.” And that hasn’t even been invented yet. It’s more surrealistic and it’s more detached from reality and more out there. But you have to be really good at it to keep people interested. If you get too weird, you’re all fucked up. 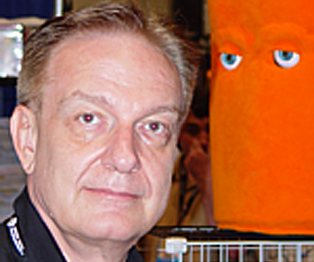 Unwinnable: I see what you’re saying. Like a giant blue whale and potted plant falling from the sky?

Bob: [Laughs] You try and sit there to come up with two ideas that are totally divergent from each other, like I came up with an [Electro-Fiction] idea for a tie, or maybe it was a sofa. It was an idea for Whales and Milkshakes.

Milkshakes and whales are different sizes. They’d never come across each other in anybody’s imagination, even in a dream. There’s just something disjointed about them that makes them perfect in a design sense. I was walking along one day and it occurred to me: Milkshakes and Whales.

Unwinnable: I have to ask, what’s going on with Marvel’s Mystery Men debacle?

Bob: A little bit later I’m going to head down to the Occupy Wall Street thing and I’m going to try to do the Michael Moore thing and talk them out of their sleeping bags and into doing “Occupy Marvel” instead. A peaceful protest. Get all these smelly people walking around the Marvel booth.

Unwinnable: It would be a good look for them around the Avengers booth. They’d fill it up pretty quickly, no?

Bob: Now you got it! But seriously, we seem to be moving along. I never really took it too seriously, though I’m sure someone at Marvel will. For me it’s kind of an amusing thing and it’s really sort of wonderful. It’s gotten interest in my Mystery Men and the movie has been playing a lot on TV. It’s on Showtime like every third time I turn on the television. Maybe Marvel should try stealing Flaming Carrot next!

Mystery Men was one of the first good comic-based movies out there. “JUNK IT!” with @Erock88 on Twitter.

Stan Lee Plays Bard with Romeo and Juliet: The War

Her Name Was Maggie Evans