In the summer of 1982, Universal Studios released John Carpenter’s The Thing. Fresh off major genre landmarks (Halloween, The Fog and Escape from New York), Carpenter was about to hit his zenith with a film no one in their right mind could have expected. The Thing oozed 1970s-era paranoia and mistrust as much as it did alien slime.

Only it was about to be outdone by a cutesy little candy-eating alien fellow from the other side of town.

That same summer, Steven Spielberg released E.T. on a public that was eager to put those dark ’70s behind them and jumpstart the carefree, fun-loving ’80s.

Before you could stick out a finger and say ouch, The Thing was critically lambasted, destroyed and in and out of theaters. Universal was embarrassed. It had given Carpenter a whopping (at the time) $15 million budget. They threw their hands up and pointed fingers, blaming JC and his auteur filmmaking style and labeling The Thing a colossal failure.

And then something strange happened. Through the years, geeks, you and I alike, found it, dusted it off and loved the film. It became us, shunned by society. But we knew its secret – that this, not the autopilot response of The Exorcist, is the gold standard for horror films. Others followed suit: Dark Horse released a series of comics, a videogame was created and even head figurine geek Todd McFarlane did a series of characters.

Flash forward to 2009 and the rumblings start. If there’s money to be made here, Hollywood’s going to find a way. Why not make a sequel? No, Kurt Russell’s too old. Carpenter’s too cranky. Escape from L.A., anyone?

What about a prequel? There was that Norwegian camp in the film, after all. And thus an idea was born – an idea that was unfortunately the child of accounting, bottom lines and boardrooms (remember kids, this is show business, not show art).

Now, if you’re a geek like me, you’ve seen The Thing (probably multiple times). If you’re insane like me, then you’ve seen it a few hundred times.

If you wondering why you’re reading a review of The Thing prequel but I haven’t even gotten to that film yet, it’s because I’m scared. You see, if this thing (ha ha) blows chunks, it will infect me. I’ll never be able to watch the original without thinking of this film.

Tell me every time you watch Star Wars that little turd nugget doesn’t creep up from the basement of your subconscious. Thanks, George.

So just in case, I’ve snuck in a bottle of Ketel One, which should help ease this horse pill down. The lights dim, my Outpost #31 Thing shirt is on, the bottle’s cracked, drinks poured and the film begins.

The first thing I notice is that the Universal logo animation is not the current one. It’s an older one. End credits would later inform me that this was the 1997 logo. Why? Let it go, there’s going to be a whole lot more unanswered whys coming down the pike. [drink] 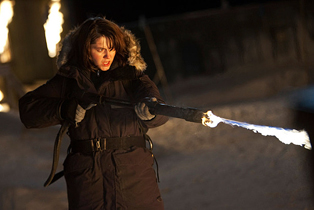 The opening shot actually isn’t bad. Nice wide exterior shot, the faint strumming chords of Ennio Morricone’s End Credits Theme. Off in the distance, a truck makes its way across a snowy landscape. The titles start, and they’re even using the original Thing font.

And that’s exactly where my enjoyment of this film ends. [drink]

Inside, two Norwegians are driving, but it’s one of those old bad movie driving shots where the background is just on a green screen behind the actors and someone’s outside the truck rocking it.

The Norwegians tell each other a vulgar joke about a young boy who discovers his father bumping uglies with mom. The kid runs out of the room. The father follows the boy and upon entering his room, he finds the kid banging his grandmother. Kid turns and says, see? Not so funny when it’s your mom. Rim shot and drink.

To have this joke be the first thing the audience is exposed to sets us up; it tells us this will be a different kind of Thing. As if your 1982 Thing is yours and I’m gonna take it and fuck it all up. And boy, do they. [drink]

I would linger longer on this joke but I’m quickly distracted by the fact that every button inside the truck and on the equipment (in fact, throughout the entire movie) is written in English. All the dials, the boxes, everything in the background.

Yes, this movie is that dumb. I drink and start to weep quietly in my seat.

After finding the spaceship, an American paleontologist is convinced to come to Antarctica for the discovery. When we first meet Kate Lloyd (played by Mary Elizabeth Winstead), Men At Work’s first hit, “Who Can It Be Now” plays on a nearby radio.

Yes, the horror in this movie is that on the nose. [drink]

In fact, there are more evil sneers in this movie then any in recent memory. You know what I am talking about: eyebrow arched, lip curled in a snarl, “mweh, heh, heh” gurgling up from the throat. At one point, it got so bad that I thought cartoon villain Sam Snidely was going to jump out, twirl his mustache and tie a damsel in distress to a set of railroad tracks.

And a little bit more of my soul dies. [drink]

When Mary’s helicopter lands at the Norwegian camp, we have one of the very many core flaws of this film. Six people get out, making the total number of people stationed there 18. There are shots of crowded rooms, people coming and going – it’s so busy you have no idea who is who. You never get to know any of the characters or their roles. At one point, the Thing kills a dude and his buddy screams, “It got Sven! It got Sven!” 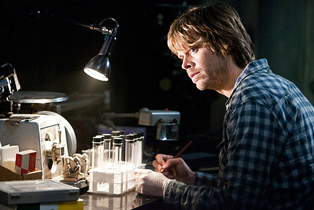 When the team finally assembles at the crashed spaceship site, they do not form the circle around the spaceship and blow the ice up as in the original. This is a major deviation from the storyline, and I sit there stewing as to why they would make such a major change. [drink]

The creature overall in this Thing is very different from how it behaves in the original. It’s all CGI (mostly bad CGI at that). This Thing can grow an 18-foot stabber tentacle with a blink of an eye that kills many a character.

It is no longer vulnerable out in the open; in fact, in one scene – oddly reminiscent of The Relic – it stalks around the camp all aliened out like a mutated panther. [drink]

The main theme of paranoia and mistrust is buffoonishly handled. Instead of having characters wonder who might be human, the creative team decided to change it to “we don’t really believe this is happening.” It’s a huge shift in how fear can be portrayed and it just truly misses the mark. [drink]

Overall, the film is peppered with small winks at the camera as if to say, “See? This is how this got this way.” I can almost picture the film crew, giddily punching each other thinking, “Oh, this will satisfy those Thing fans. [drink]

By the time we get to the start of the third act, I’m tired and nearly drunk. Shadowy suspense and tension is replaced by loud bombastic stings of music, over-the-top melodrama and exterior snow sets so bad they look like they’ve been borrowed from the Ice Capades. [drink]

In the beginning, the breath from the cold air is CGI’d onto the actors, by the midpoint it starts to wane and at the start of the third act it’s just completely gone. Whereas in the original, they couldn’t go outside, here at one point they look like they are about to cook S’mores around a campfire. [drink]

Huge chunks of dialogue are lifted from the original and then manhandled. [drink]

A storm threatens to come and never arrives, and the finale plays out as a chase scene through the alien spaceship. When the final monster appears, not only does it break its own rules, it more than a little resembles the final demon in Hellraiser 2. [drink]

There’s so much more to say: the flawed logic, the overlit rooms, the digital film processing that makes the film look flatter than the two-dimensional characters onscreen – it’s making my head spin and I fear I’ve wasted enough time here. 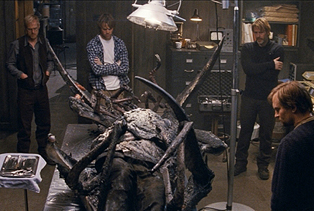 To pound in the final nail as I finish the last of the vodka, a scene plays through the end credits in a feeble attempt to tie this film to the original. It is so depressingly bad – they even use shots from the original film, but since the aspect ratio is different, the shots appear stretched and distorted.

The ushers find me curled up, in a fetal position, under my seat.

As I stagger away from the theater, it dawns on me: This isn’t a movie made for me. It’s made for horror virgins, for people who like their vampires glittery and their Potters hairy. And that’s a shame because there was a story here to tell and an opportunity to expand mythos.

I originally bitched that there are much more experienced horror teams out there – del Toro, Rodriguez, Neal Marshall Stevens (hell, even J.J. Abrams credits The Thing in Super 8 – who would could have handled this better. But in Universal’s eyes, they had been bitten once before by hiring an auteur and so they went with a director who had never made a horror movie before and the writer of the Nightmare on Elm Street remake.

As they saying goes, you get what you pay for. What we got is run-of-the-mill, paint-by-numbers horror crap that is more at home next to Debbie Gibson and Mega Shark then R.J. MacReady, who’s off in the ice somewhere, polishing off the last of that bottle of J&B.

You know what? That sounds pretty good to me right now.
I think I’ll join him.

Visit Matt at his real outpost, The Loop Lounge, for some Ketel One, J&B or any other preferred funtime spirits. A word of warning: If you mention The Thing, just make sure it’s prefaced by “John Carpenter’s.”

Whales and Milkshakes: Getting Inside the Mind of Bob Burden