Heraclitus, the fragmented pre-Socratic, wrote, “Just as the river where I step is not the same, and is, so I am as I am not.” From this the notion of flux was introduced into the philosophical dialogue. Heraclitus observed a world in which everything flowed. As in nature, Man too exists in a state of perpetual change.

We are on the brink of change – politically, economically and organically – despite the appearance of cultural stasis. While there is no post-apocalyptic wasteland looming on the other side of the horizon, visions of such a place are becoming not only more prevalent, but increasingly real. Perhaps it is only a veneer of fatalism that marks such predictions, or the arts betraying the grim expectations of society at large. Whatever the case may be, it is undeniably tangible, and whatever change we are facing, it is punctuated by the very real image of a scorched earth.

Dark Horse is the most recent imprint to unveil such a vision, releasing yesterday Orchid #1, the first of a 12-issue series from the minds of Tom Morello and Scott Hepburn. 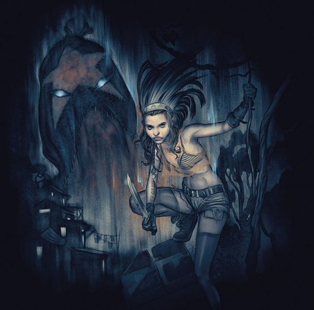 Immediately the reader is introduced to Morello’s future vision, and arguably the most important character of the series: a world that has submerged itself. From the opening line, “When the seas rose, genetic codes were smashed,” it is evident that humanity has set the clock back to zero. Dead are the days of the noble savage. Education is lost, cultural mores have been shattered and our one testament to true humanism, the abolition of slavery, is little more than an afterthought.

But it isn’t simply the degeneration of the human condition upon which this story rests. Heraclitus also writes, “Air dies giving birth to fire. Fire dies giving birth to air. Water, thus, is born of dying earth, and earth of water.” The earth in Orchid is dead. Polluted and disregarded, toxic dumping has set in motion a new evolutionary tract, giving rise to monsters that roam the unprotected wasteland far below the fortified highland cities of the rich and powerful.

The immediate socioeconomic implication is clear. Those who could afford survival live a protected life above The Wild, where the poor live in desperation awaiting either slavery, or to become prey to any of the stalking new species.

Orchid channels the master/slave dynamic in two ways. First, the haves exploit the have-nots, collecting bodies as chattel to be put to work. The story is very much dependent on a primitive mindset – as if slavery is something of a contingent truth. Secondly, that violence begets violence. The Wild represents a microcosm of the socioeconomic model the book presents. The body is meaningless in the wastelands. The body as commodity is illustrated not solely through forced labor, but prostitution, as well as a culture of punishment and branding at the hands of Inquisition-esque slave traders. The titular character, a prostitute herself, carries two marks on her body – “Property” across the chest, and “Know Your Role” down her forearm – further rendering any notion of flesh in the book meaningless.

Hepburn’s art provides a clear distinction between foreground and background, offering a nuanced aesthetic to the book’s underlying themes, both subtle and otherwise. The deep, looming landscapes are dull, nearly clouded in comparison to the saturation reserved for Orchid and Simon, the book’s principal characters. Each panel becomes its own universe hinged on a mutuality between the detailed and the obscured. If there is any place to truly apprehend subtext in Orchid, it is in the art.

Fundamentally, the first issue reads quite cinematically, and at times comes off as a bit crowded. And it should. Orchid presents a world in upheaval, a fledgling civilization defined by lack and new mythologies. The flood has passed and nature is once again blind. In Morello’s mythology everything is in flux and what is at stake is a humanity forced to rewrite itself.

As always, discuss and debate with Peter via Twitter @peterlangcrime and then find him this weekend with the rest of Team Unwinnable at NYCC!