A bodysuit from Colorado. Fishnets from Florida. Boots from Alaska. No, it’s not a nationwide search for Kesha’s new tour wardrobe, it’s my personal quest for provisions for New York Comic Con 2011. EBay and a discount dance supplier can be a nerd’s best friend when trying to make your dreams of herodom come true, but why is a recent college graduate who has just enrolled in a completely new kind of school taking a day off from class to traipse around in spandex?

It all started years ago in an old house in Essex County. Saturdays were spent catching up on cartoons and watching old Mothra movies. Every fall my mother would ask my sister and me what we wanted to be for Halloween. We chose Frankenstein’s monster, mummies and vampires, and before our eyes a pair of long johns covered in gauze transformed my sister into the mummified undead. A few yards of shiny fabric turned me into a gypsy, a dancer or Sailor Moon. What I learned from all those sessions of experimentation and brown grocery bag patterns was the worth of self-transformation and the endless possibilities when you hold the task in your own hands.

Since then I’ve moonlighted as Judy Funnie from Nickelodeon’s Doug, Lady Gaga, Batman’s Robin and Zombie Carmen Miranda for my alma mater’s annual Zombie Prom. Many of my peers have given up on such costuming pursuits. Some have wholly relegated themselves to the realm of expensive, poorly-made, store-bought items, which for some reason are usually slutty occupational outfits. I like to think of each year as a challenge and a chance to try to recreate a favorite character through my own eyes. I even love finishing the projects enough that I look for opportunities outside of Halloween to dress up. For me it’s a very indulgent form of fun, but make no mistake, doing it with any conviction can take a lot of planning, time and discretionary dinero. Once you’ve gotten yourself stuck on such a big idea it’s up to you to follow through. Here’s a Cliffs Notes version of how I take on the task. 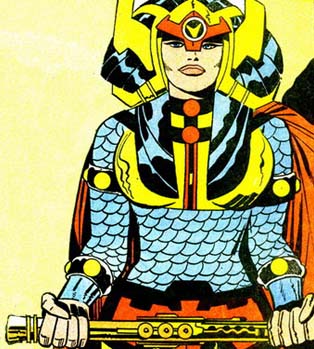 First I come up with an idea. Usually something just sticks in my head. Then I sketch it out, trying to imagine what I need and where to find it. Then I start looking. This year’s inspiration is an anathema in the comics universe. She is stronger that most of her male counterparts, yet she is both fearless and feminine. She keeps a home, is married and picks bullets out of her flesh as easily as the rest of us pick spinach from our teeth. It’s that lesser known warrior of Apokolips, Big Barda!

Big Barda’s costume has a lot to offer; the colors and design are bold and traditional but still make her unmistakably who she is. She is six feet tall and I am, well, five foot three. OK, so it’s not all a perfect analogue to my personality, but we’ll make do. Most of all, while her garb is formfitting it doesn’t require me to be half naked or get a full body wax like the costumes of some other superheroines. Bottom line: Big Barda and her costume kick ass.

Big Barda (in most incarnations in her 40 years) dons a blue bodysuit covered in scales with gold underwear and a bra on the outside. The details and design mimic a suit of armor which, while limited in protective capacity, serves to bolster her intimidating look. She complements this with big boots, long gold gloves and a piece of headgear that, at best, looks like an odd kerchief. At worst, I can’t help but be reminded of Dark Helmet in Spaceballs. This leaves me with the task of transferring these details into something that is recognizable in three dimensions. I need to be able to be productive and on time without going bankrupt AND to actually make the suit with my own two hands. Something tells me this could be a bit of a stretch.

As for method of construction, I’ve never had much in the way of funds to throw around. Being scrappy when crafting can be your best (and sometimes only) method of attack. Thrift stores are a great place to get fabric, base garments and the occasional gem not sold in a retail store. Judy Funnie’s dress and Zombie Carmen Miranda’s skirt were both found at the Goodwill for less than $5 each. A working knowledge of sewing is invaluable and if you don’t already possess it, making a costume is a good place to start. Since you won’t wear it every day, less-than-perfect craftsmanship will do and ensures you really do determine every detail of the character you embody.

As for mistakes, you really have to take them as a learning experience. When I covered a cheap bra with gold fabric last week and accidentally ripped the fabric cutting a slit to avoid the straps I’d later cover, I had to hide my mistake. The easiest solution was to extend the petal shapes I later attached over the straps to mimic armor.

There are times, however, when your average piece of clothing will not suffice. I am speaking of the matter of Big Barda’s fish-scale bodysuit. I don’t think they have that at Target. I studied photos, fan costumes and joined a superhero costuming message board to find ideas. I found my solution in a Big Barda cosplay from San Diego Comic-Con this year: a fishnet bodysuit was layered over a blue one to create the effect without the aggravation of sewing costly stretch fabrics. In a time of crisis, the simplest answer is often the best. With all that layering going on, I’m wishing for a cold fall for the first time in my life.

For now, that’s all she wrote. Literally. I have been trudging along in my production but unfortunately work, school and all of that other “real life” crap has been getting in the way. Mark my words: my pass to the convention has already arrived and that costume will be done, metallic nonsense and all, by the weekend if it kills me. Let’s hope not, or else my dear friend Emily will have to go solo through the Javits Center as Zatanna, Mistress of Magic. I’ll keep you posted with pictures and details from the big day, as I’m sure a magician and an Amazon in underwear may turn some heads. Wish me luck.