While reading Dark Horse Comics’ Crime Does Not Pay Archives Volume 2, I was reminded of the time I worked for New York comic convention impresario Mike Carbonaro. Mike bought a lot of collections and part of my job was to organize and catalog various collectibles he bought and sold. I was knee deep in Golden Age, Silver Age, Bronze Age and (ugh) ‘90s comics every day of the week. It was a pretty awesome job. While in his employ, I got to fulfill a lifelong dream. I got to thumb through a copy of Detective Comics # 27 – the first appearance of Batman!

As much of a joy as it was to read the first printing of Batman’s first case, another thing that caught my attention was the sheer amount of crime stories in the issue (I don’t know why – the book is called Detective Comics). Mike, in his always exuberant tone, taught me more about the Golden Age in two minutes than any of those DK Publishing encyclopedias: Batman was the second superhero; he and Superman were competing against crime comics, western comics, funny comics and horror comics in the 1940s. Though Lev Gleason Publications might tell you differently, crime books paid the bills in comics, and there were a lot of them.

Crime Does Not Pay Archives Volume 2 is full of some great comics. It also serves as a history lesson.

Crime Does Not Pay Archives Volume 2 continues Dark Horse’s archive series of the pre-code comics known for violent and gritty imagery, many of which are showcases for the types of tales Dr. Frederic Wertham claimed corrupted the minds of young children in the 1940s and ‘50s. Each issue begins by chronicling the career of an infamous crook, with creators like Charles Biro, Jack Alderman, Bob Wood, Alan Mandel, Dick Wood, Sam Burlockoff and others behind the series taking full advantage of the comic book medium to tell criminal tales in all manner of settings. 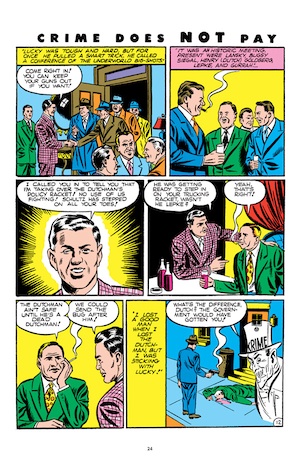 Stories like “The Dalton Boys” and “Dodging Death With Bill Longley” are set in the Wild West, while other stories (like “The Weird Tale of Mister Destin” and “Hex Horror”) told lurid tales involving the weird – something popular in the pulps and series like Tales From The Crypt and Vault of Horror. However, each issue is tied together with the ribbon of crime.

Dark Horse’s packaging of this collection is absolutely gorgeous. The paper and binding are top notch. The colors are vivid. They even reprint some of the original advertisements – giving the reader a deeper glimpse into the world. This contextualization really helps the immersion, as in when the reader comes across the casual racism that was so prevalent in 1940s American culture.

In fact, like many comics of 1943, Crime Does Not Pay is chock-full of careless bigotry. The collection’s first tale, “The True Life Story of Charles ‘Lucky’ Luciano,” has every off-the-boat Italian character add an “a” to the end of every word. (“Theesa ees America! Eet ees your-a land, my son!” the elder Luciano tells a 9-year-old Lucky.) Then there’s the Armenian brute who doesn’t look terribly human. Not to mention the house ads featuring Japanese people sporting yellow complexions and rat teeth. It’s not exactly a bright spot for the art form, but these comics serve as a window into the social attitudes of the time.

Even without a code, the sex is held back – stiflingly so. As Greg Rucka points out in his intro, the truly horrible crime in “The Strange Saga of Rafael Red Lopez” is glossed over. The repeated rape and murder of Fay Walters happens between the panels, with the former implied and the latter only mentioned, but never seen. The spaces between the panels in “Dead Eye Romeo” ooze sex, but not so much as a flash of cleavage appears within those pages.

Crime Does Not Pay Archives Volume 2 is full of some great comics. It also serves as a history lesson – far more in depth than the two-minute crash course I got over 10 years ago. It’s the kind of collection where you come for the Greg Rucka introduction and stay for stories like “The Cross Eyed Killer.”

Ian Gonzales isn’t too much of a criminal on Twitter @IanGonzales.