Network TV has always been a prickly ground for science fiction. Many series crash and burn, but occasionally there’s a Star Trek, Lost, X-Files or Twilight Zone that transcends this fate. We also have shows like Fringe (which hangs on by a thread) and Firefly (the great sci-fi series that never was).

Cable television has proven to be a richer ground for science fiction series to develop in, as there’s less limit on what can be done, what social commentaries can be delved into and less of a need to please the masses so that the ratings stay healthy for advertisers.

It’s this last point that has nagged at me while watching the first two episodes of Terra Nova, the new Fox series produced by Steven Spielberg.

The series opens in the year 2149, and the Earth is declining. While technology has continued to develop, the environment has become unsuitable and people must wear a breathing apparatus when outside. There are also hints of a fascist government, as the main characters of the Shannon family must hide their youngest daughter, Zoe, from the police during a “population check” at their apartment.

Jim Shannon (played by Jason O’Mara), ends up going to jail for fighting the officers after they discover his daughter hiding in the vents.

Flash forward two years. Jim’s wife Elisabeth (Shelley Conn) is a trauma surgeon who may have a possible in on an experimental relocation program. Its purpose is to send people back through time 85 million years to the Cretaceous period to start life anew in a human colony called Terra Nova.

Elisabeth and the Shannons’ two teenage children (15-year-old daughter Maddy and 17-year-old son Josh) are to be part of the 10th migration through the time rift. She hatches a plan to first break her husband out of jail, and then smuggle him and Zoe through the portal as well.

What follows is a little sloppy and could have been explained in much less time (almost a quarter of the two-hour premiere is spent in the future). In short, the

Shannons all go through the portal after evading the surprisingly light security stationed at the time rift.

I was reminded of the classic Simpsons “Treehouse of Horror” segment, “Homer3,” where Homer falls through a hole in the wall and winds up in a 3D computer-animated landscape. At one point he says, “I feel like I’m wasting a fortune just standing here!” as tons of equations and shapes zip by.

I felt the same way about the first half of Terra Nova, Episode One. People explained things about the workings of this world while CG stuff happened. It’s not until almost the 45-minute mark that we see our first dinos – some friendly Brachiosaurs. They instantly bring to mind the friendly and more visually impressive Brachiosaurs of Spielberg’s other dino-fest, Jurassic Park. 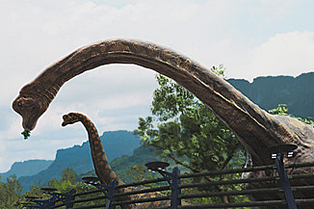 From this point, the references start getting obvious. Besides Jurassic Park, there’s a little of Lost as well, since the Shannon family stumbles upon many random mysteries. In one instance, son Josh is shown by a fellow teenager – potential love interest, Skye – mathematical equations written on stones by a waterfall.

Pottermore: Back to Hogwarts!