But at least Lost got to end on its own terms, the way co-braintrusters Damon Lindelof and Carlton Cuse intended.

As Fringe heads into tonight’s premiere of Season 4, it remains a mystery on par with any on the show as to whether we’ll get the same satisfaction out of one of the best serialized dramas playing on the otherwise pretty booby tube. 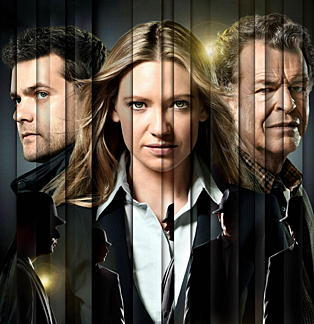 In an alternate world where Anna Torv has red hair, the ratings system may actually recognize the healthy numbers of iTunes downloads and DVR watchings that the show enjoys. In this one, however, networks can only consider live ratings – and the show’s future remains a perpetual cliff-hanger on Friday nights, a graveyard where many sci-fi shows have gone to die.

“You mentioned Lost. The last line of the pilot was, ‘Where are we?’ Hanging over the entire series was the overarching question, what is the island?” says Fringe executive producer Jeff Pinkner. “And that was the question that was only answered at the very end. Damon and Carlton would tell you that they answered in the way they wanted to, in the way they always intended to.”

“Our show has never been about one big overarching question; our show has really been about the drama of these characters set against the backdrop of these Fringe mysteries and themes,” says Jeff Pinkner. “Whenever it becomes clear the show is coming to its natural end, know that we will have a satisfying place to leave the characters.”

Don’t get Jeff Pinkner and his partner in X-File-like crimes, Joel Wyman, wrong. They are planning many more stories and would relish the chance to tell them – including this season’s biggest theme, the complete disappearance of Peter Bishop (Joshua Jackson) from the time stream and the impact that void has on his father (John Noble) and his lover (Torv).

“We start usually with theme and the message we’re trying to say every season,” says Wyman. “And one of the themes we were really interested in examining was the notion of impact. What impact do you have on others? What impact do they have on you? That life is valued by the connections that we make. And what would happen if you just disappeared? If you didn’t exist?”

At San Diego Comic-Con, Jackson was as much in limbo as his character and had no idea how he’d be written back into the show. Shockingly, the biggest sci-fi nerd on the cast also says he’d be fine if Peter never comes back.

“I feel like the character progression of the Peter we introduce at the beginning of the pilot is finished by the end of Season 3,” he told this reporter in July. “So we’re sketching either an aftermath, a postscript to that story or we’re going to have to draw an entirely new one; something new has to come out of it.

“For Peter, when we introduce him, the guy who cares about nothing has no roots anywhere and keeps no friends close to him and lives this nihilistic life where it’s all about him,” said Jackson. “To go forward three years and to have that same guy decide to get in the machine, which he didn’t really want to do – to decide this is my fate, this is my destiny, that’s a major progression.”

“To make sure the people that he loves can have a chance to live, that is a very noble sacrifice and that isn’t anything the guy three years ago would have even considered doing. So that to me is a period full stop on Peter.”

But not a full stop on the show as creator J.J. Abrams, Pinkner and Wyman intend it. They do have a plan, they swear, for fans who always worry that they are flash-forwarding to another Flash Forward or worse, The X-Files. The producers just need people like you to start blowing off your Friday night social schedules for an extra hour and watch the show, so the rest of us can find out the grand pattern behind the phenomenon that the Fringe Division is investigating.

“If there’s anything that we’ve proven to our fans, we believe, is that we try to pay things off,” says Wyman. “We’re not trying to keep you strung along with some secrets we’re not going to answer. We want to give you answers; we just want them to be compelling.”

The fourth season of Fringe premieres tonight at 9 p.m. on FOX.

I Double Dog Dare You To Go See Rise Of The Planet Of The Apes!
Previous Post

Drive: A Hell of a Ride