This summer will see the release of cross-genre flick, Cowboys & Aliens, from Platinum Studios, directed by Jon Favreau. The trailer definitely shows that this will be a solid manly-man, moody Western suddenly slapped with an alien invasion. And there’s nothing I like better than some cross-genre action. 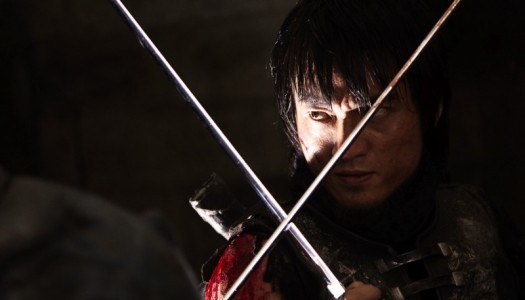 We may have another three months until we witness the sixgun laserblast showdown, but right now on Netflix streaming, you can do one better and watch ninjas fight aliens in the apt titled AvN (Alien vs Ninja). And while CnA (Cowboys & Aliens) has spaceships and rayguns, the aliens in AvN are more like Predator mixed with the Alien xenomorphs, a touch of Tremors with their tunneling powers and of course, they’ve got badass ninja skills.  It is chock full of regenerating superfast stunt team guys in rubber padded costumes running amuck in the woods. 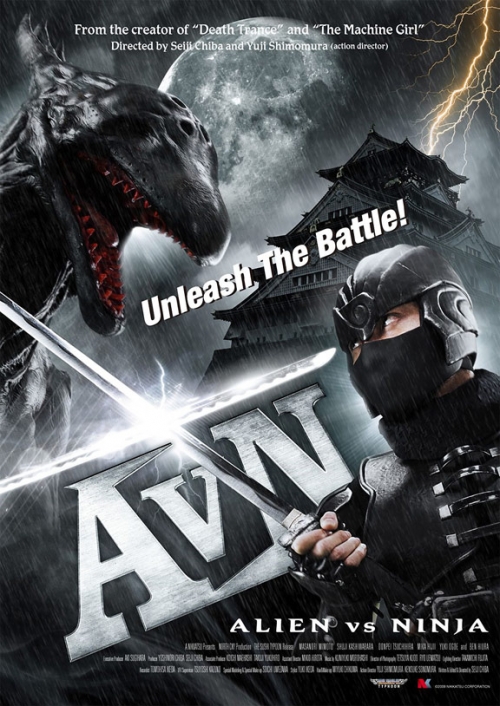 Alien vs Ninja is directed by Seiji Chiba. His next film, The Kunoichi: Ninja Girl, looks to be a more straightforward superninja flick and just as filled with over-the-top action. The action director is Yûji Shimomura who’s worked on excellent action films like Versus, Aragami, Shinobi and the upcoming Yakuza Weapon, with Kensuke Sonomura who worked on Hard Revenge, Milly Bloody Battle, The Machine Girl, and Warriors Way. These are definitely films that are on the short list of fun, insane action-riddled flicks from Japan in the last few years.

But enough of the boring details!! Our story starts when three ninjas blow up a feudal mansion and then fluidly slay a team of rival ninjas. Then comes what I call the schizophrenic shift in the plot. We’ve established the world of these ninja, and now know just how much ass they kick, when suddenly, a fireball shoots from the night sky, crashing into the woods nearby and out of the meteor hatches some vaguely CGI, leaping, hunched beast of an alien. The rogue ninja team is then dispatched to uncover the secret of the fireball and then it just becomes a non-stop slaughter of ninjas from the unseen attacker! Now it’s up to our pared down team of superninjas (the fighter, the pretty boy, the jester, the tough/vulnerable chick, and the solider) as they hack up the monster while trying not to be mind-controlled by its fetus-like throat slugs that ooze from its head.

The action starts off great because we have ninjas vs ninjas. Once the alien is revealed, well it becomes a much harder sell. They start with off-screen attacks, then blurry extreme close-ups, to hidden behind trees far shot, and finally we get a glimpse of the guy in the padded grey costume with the large headpiece and rubbery spines on his back. The CGI prehensile tail is a bit of a distraction but the SFX are handled with a grace that I wouldn’t have expected. When we get to the third act and the mind-controlled dead ninjas are made to battle our remaining heroes, well then it steps up and gets weird. 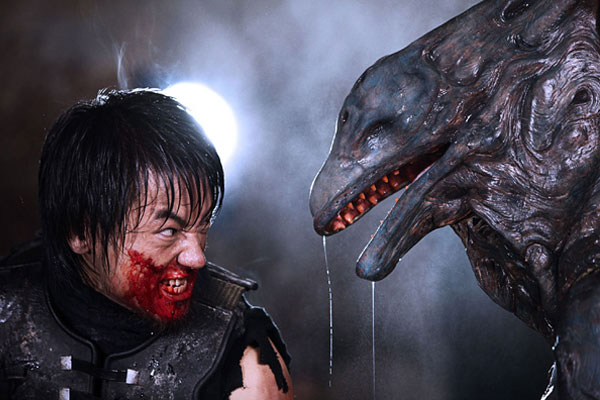 The gore is pretty minimal, but it’s gross when it’s on screen. Hands and fingers chopped off ooze a liquidy pink paste, and the head-babies it embeds in the warriors’ mouths are really disturbingly low-budget and creepy. But the effects are edited together to keep the suspension of disbelief there, though when the final alien starts swinging a sword and shooting a gun, well, things had better get even more insane to keep the viewer invested. And sure enough, the alien evolves, grows wings, and the whole things gets airborne in a scene unlike any other I’ve seen before.

This flick is badass in its delivery of action and weirdness, but it doesn’t really pull together in the end, though it is an entertaining watch. AvN is now streaming on Netflix which I suggest checking out only if watching a dubbed slice’em gore-fest is the kind of mood you’re in this week.

Kurt Christenson uses his ninja social media skills to defeat all manner of foe, from aliens to book publishers, over at @KurtChristenson.