If there were two things that the Harry Potter franchise seemed to lack, it was more information for its insatiable fans and a unique experience in the world of wizards.

Sure, there were videogames where we could play Quidditch and explore Hogwarts and countless Facebook apps that “sorted” us based on predictable questions. But the videogames were often based solely on Harry’s experiences – we never really got to create our own. And while I’m sure the park in Florida is lovely (I’ve never been there, and I’ve heard it’s always crowded), not everyone can pick up and go to Florida.

Pottermore is supposed to be the answer to that.

The website is very reminiscent of a ’90s-style site. You’re guided through each chapter of the book and prompted to click on certain “magical” (read: glow when you hover over them) items. These items allow you to gain new insights into the world that J.K. Rowling has created. They range from what inspired her to create a certain passage, setting or character to additional character backstory. Some of them were boring to me, and some were just what I was looking for.

A friend of mine was somewhat disappointed with the level of interaction because she had more of an MMO-style website in mind. Let that be a lesson to all of you: Pottermore is no MMO. It’s more Neopets than World of Warcraft.

She then reminded that on the website for Harry Potter and the Sorcerer’s Stone – which came out TEN YEARS AGO – you could play more extensively and interactively than on Pottermore. I’ll remind everyone that this is still in beta, and we don’t know what changes are on their way (there is no Quidditch playing in Pottermore – yet?).

The click-and-read monotony of each chapter quickly gets systematic and old. If you can get past that, however, you get to the actual fun of Pottermore: you become a Hogwarts student.

You receive your wand and are sorted into a Hogwarts house by a series of questions that aren’t as straightforward as any Facebook quiz. These questions range from the fairly simple (“Which trait do you most value?”) to the more abstract (“Head down the path to the castle, forest or beach?”) to the downright vague (“Stars or moon?”). It is impossible to cheat the system and get into the house you want.

As of right now, only the first book is available. Once

Any level of Potter fan will be impressed by the attention to detail and depth of information that the site provides. There is more information than you can hope for, and if you were ever curious about anything in the series, you will be able to find what you are looking for (or will eventually, as more information is added).

It is easy for fans to imagine the future possibilities of the site. At this stage, though, it is only imagining.

I would venture so far as to say that if you have no commitment to the series other than the first movie, you will still have fun with the site. 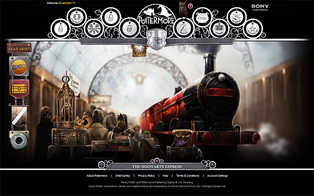 However, as interactive and innovative as the site is, it has major flaws. Aside from being sluggish (how kind I am to use that word), the site crashes constantly. Pottermore is almost never fully operational, and it is a near miracle that anyone can play on it. Some people that I’ve spoken to have already abandoned the site due to performance issues and lack of content to explore.

It is depressing and understandable that they have to work out all the bugs, but everyone I spoke with on the issue expresses the same sad sentiment: How does this website, which can hardly support its beta users, intend to have a full launch by the end of October, as the site is now promising?

But, that being said, the site is fun, informative, and (baseline) interactive. It has a lot of potential and if they can fix the technical issues, then it is possible for Pottermore to have a great future.

Until then, Ms. Rowling is going to have to work a little harder to create a unique, immersive experience with which to impress Pottermore’s users.

If you’re already on Pottermore and don’t hate me for this review, please find my username, DustDraconis44.