Sometimes fun can be flawed.

Resistance 3 continues its story of an alternative history set in a post-WWII time period. Humanity is once again struggling against an alien race known as the Chimera that is dead set on infecting the entire population and destroying the planet. The story of Resistance 3 starts out promisingly, with real world events incorporated into the mythos. The narrative begins with the Tunguska Event of 1908, where the Chimera have their first contact with humans. Sadly, that is about as deep as it ever gets. There is so much potential for a great story here, but I found it very boring and predictable.

You can justify almost anything with upgrades.

This game is supposed to take place in 1953, on what remains of a war-torn planet Earth. Now, I know we all saw Iron Man and realize that Tony Stark can “build this in a cave, with scraps,” but that method of plot development is not allowed to happen here. A game that is set in this time period either has to be very pulpy (Rocketeer) or not pulpy at all (Saving Private Ryan). I don’t like the half-hearted approach this game has attempted to script. I know this time period from having watched many Steven Spielberg productions, and Resistance 3 doesn’t seem to know what it wants to be. This can be demonstrated by its specialized weapons, which don’t fit into either reality or sci-fi scenarios.

The first weapon I got in this game was a .44 Magnum, the most powerful handgun in the world (thanks, Dirty Harry). The Resistance 3 .44 Magnum is still the most powerful handgun in the world, but now it’s been equipped with exploding rounds. The second gun I got is called a Bullseye. This one tags the enemy and, no matter where I aim, the enemy gets hit. The third weapon I found was the equivalent of an M-16, except its alternate fire shoots out small turrets. Yes, the gun shoots out smaller guns. One of the weapons even creates a temporal vortex that multiple enemies are literally sucked into.

Now, if someone was to throw a Shrink Ray and a Freeze Gun into this mix, you might have a game that

is reminiscent of Duke Nukem. But the problem would still be that I can’t believe the story, which is sad because the gameplay is very solid, with only slight hiccups here and there (paltry ladder mechanics in 2011? Ladder mechanics should be figured out and nailed down at this point). Much of this gimmicky weaponry could be allowed if it included some RPG or weapon management elements. You can justify almost anything with upgrades. Don’t get me wrong; I don’t think every shooter needs to be S.T.A.L.K.E.R. or Half-Life, but even Halo was able to take silly and make it serious (yes, Halo is silly – my only example needed is the Unggoy, or as they are generally known, Grunts).

I don’t think Resistance 3 needs to be goofy, but with the game’s weapon mechanics, what else am I supposed to believe? The game companies need to stop playing down to their audience. This isn’t supposed to be summer camp where everyone gets a trophy. What kind of gun shoots guns? 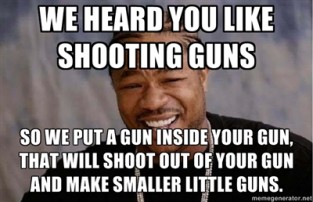 To its credit, Resistance 3 is a finely-tuned game with quick, responsive controls. There is no doubt that the Insomniac 3.0 engine gameplay is fierce and solid. Some of the maps are a bit run and gun, but for the most part they have depth and some interesting configuration. I would imagine this game would be fun playing on couch co-op.

However, the fact that we are knocking on the door of the next generation of consoles, and this is what is being presented as a triple-A title, is not very encouraging. We need to demand smarter gameplay. Not everything needs to be Deus Ex, but there should be some kind of happy medium.

When Chuck is not looking down the barrel of a gun he can be found @JapanDudeGirl. Resistance 3, from Insomniac Games, is available exclusively for the Sony PlayStation 3.